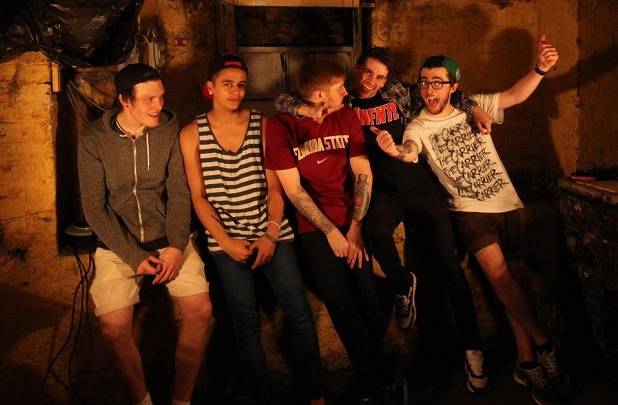 After exploding onto the music scene in 2012, the release of 2 excellent EP’s, currently touring the UK, and having a support slot for Enter Shikari; it is about time the world started paying attention to Neck Deep.

Neck Deep are flying the flag for UK pop-punk and are giving the Americans something to think about if they are to continue their domination of the genre.

Fortitude Magazine recently caught up with the band.

How was Neck Deep formed?

Me and Lloyd wrote a few songs with the intention of just putting them online, we never intended to play shows or take it that seriously. But when we started getting some recognition, we wrote Rain In July, and then thought we should look for some members. West was in a band with Lloyd and we had been friends for a while anyway, so that was a no brainier. Fil had filled in on bass for a tour with Lloyd and West’s old band, so that again was pretty easy to sort out. Dani was a little gem we found when he sent a drum promo to my brother Seb, he does all our recordings and a lot of behind the scenes work with ND, and yeah Seb fucking slayed so we got in touch… so that’s how it all came together!

What’s the best part of being in the band?

Touring and getting to see all these places we’d never normally get to, plus getting to play shows to kids all over the country, that’s cool. Just generally being able to interact with fans and hearing what they have to say and soaking up all the support we get from them is awesome haha

When you guys started Neck Deep did you think you’d come as far as you have in such a short time?

Not in a million years haha. As I said before, Me and Lloyd didn’t even intend to do an EP, let alone get where it is now! We’re very lucky to have been as successful as we have in such a short amount of time, it’s still hard to get our heads around even now, we never know what to expect as there’s always something that comes along and takes us by surprise. It’s all pretty crazy!

Why do you think you gained such a big fan base in the time that you did?

I really don’t know! People just seem to like the songs we write I guess, we try to be a little different, we talk to fans a lot and do our  own thing so I think those elements combined all sort of help, I guess you’d have to ask our fans!

I presume you guys are aware of the huge amount of support you get from far and wide from Tumblr. Do you ever look at what’s said or made using the bands images or lyrics?

Yeah we check tumblr tags and twitter mentions etc. every day! It’s fucking rad that people take the time to make pictures with our lyrics and stuff on them. It helps us too because people reblog that and then other people see it with some notes on there and decide to check us out, keep spreading the word! It’s sick, we love all that!

If you were told you could choose 4 bands to tour with, who would they be and why?

Limp Bizkit, Knuckle Puck, Real Friends and Handguns because it’d be fucking rad. Everyone would go nuts to Limp Bizkit because everyone likes Limp Bizkit, if you don’t then you need your head checking. Then have the best pop punk supports ever haha plus, all the dudes in Knuckle Puck, Real Friends and Handguns are super cool (though we haven’t met them in person yet, we just give each other sass/ love over twitter haha)!

From my understanding “Up In Smoke”, from your latest release ‘A History Or Bad Decisions’, is about Ben being kicked out of university, Can you tell us the story of events that led up to your expulsion?

Basically, the course I was on wasn’t what I expected, and I just sort of sat in my room doing nothing all the time. Neck deep was taking off as I was starting the year, so I just lost interest in the course and never went in! I would’ve only ended up dropping out or deferring to do music anyway, so it was always going to happen, but my parents weren’t happy at all! But now they understand that this is what I want to do, and we have a really good chance at doing it properly, the fact that they’re behind me all the way now is good.

You’ve just started your tour with Attention Thieves, What date are you looking forward to playing most?

Yeah it’s going really well so far, those guys are awesome and we’re having a sick time! Southampton was amazing, that was always going to be good, but now the date we’re looking most forward to is probably Leicester. We have a strong fanbase down there so that’s always good, but then so is London, and it’s the last day so we’ll party afterwards. Apart from those two we don’t really know what to expect from anywhere else, so if anyone’s reading this and is coming to one of the dates, then make sure you surprise us and give us a sick show!

Can we be expecting more shows during 2013 or will you be concentrating on future releases? An album maybe?

Yes we’ll be touring a lot this year, as much as we can, so more shows is a definite! We’ll be working on writing new stuff, it’s very early days, but we’ll definitely be working on it. Keep an eye out in the future…

What were your initial reactions when you found out that Daniel P Carter was going to be playing a song from a history of bad decisions on the Radio 1 Rock show?

Surreal! Everyone was going crazy, all our friends and families were tuning in and supporting us, twitter was going crazy, it was mental! It’s an honour to be on radio 1, it’s the biggest station in the country so it’s every bands dream to be on there, it was awesome!

Are you looking forward to supporting Enter Shikari in Liverpool? Is there any news of you playing more dates on that tour?

Yes! That’s going to be amazing, we’ve got some work to do in order to make sure we put on a good show, but we can’t wait. That’s going to be the biggest show any of us have ever played, let alone the biggest show this band has played, so it’s quite daunting but exciting at the same time. As far as other dates, we haven’t been confirmed on any but it’s cool, we’re more than happy to have the opportunity to play just the one. Enter Shikari were one of our favourite bands growing up, so it’s going to be surreal to be playing with a band that we look up to.

I have a few fan questions for you guys.

Who has inspired you the most to become a band? (From Geej Hunt)

I’m sure we’d all say something different, but without a doubt mine would be Blink 182, New Found Glory and my two older brothers. They were the Bands and the people that got me into music!

What has been the most exciting thing that’s happened to you so far? (From Abbie)

Putting out our two EPs was good because we love hearing what people have to say about our music. Teaming up with Mythophonic (Artist Management) was sick, because we get to work with some awesome people, plus they’re going to help us step up our game.  That was when things started to get crazy, haha it’s also cool to know that people in those higher places have faith in us!

Check out Neck Deep’s ‘Over And Over’ below: