Interview: Emily’s Army – “England have such great bands, it’s crazy cos it’s such a small country” 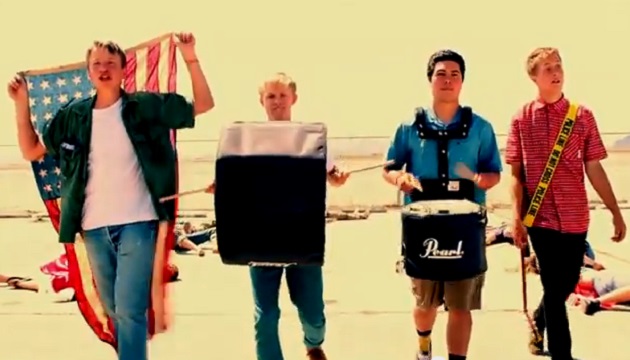 So, what’s been your favourite thing about the UK so far?
EA: The accents! It’s cool because in the US people think that everyone in the UK has the same accent. Then you get here and it’s very different, it’s really interesting.

Do you get a different reaction here to what you get in the US?
EA: Yeah absolutely. These are our first shows ever in the UK, like last night we played Glasgow and it was a really great, really enthusiastic crowd. It took us a long time to get that in America. We’ve been really surprised by the reaction. Glasgow last night went crazy for Loch Lomond, they were chanting for it before we even got round to playing it.

What was it about Loch Lomond that made you think, we have to do a version of this? It’s a bit of an obscure song to cover.
EA: We sang it in freshman year choir class, Max and I actually arranged it to be punk rock before we told Joey we were gonna play it. Then we played it for him and he was like “Oh nice, which one of you wrote that?” because our choir teacher had a tendency to pick lame songs sometimes, so when he picked that song it was pretty cool.

Did you expect that you’d be touring the world at this point?
EA: We expected it to be a few years yet. We didn’t realise this would happen.

Did you have a back up plan incase it hadn’t all turned out this well?
EA: We’re still young so we didn’t really have back up plans but a few of us are going to go to university back in the US soon.

When it came to the second album, did you approach it differently to the first one?
EA: Yeah, we spent a lot more time working on the songs for this album and we recorded a lot of demos before we actually went into the studio, we were way more prepared.
Joey: One thing that was different this time was that to play drums I played to a metronome. So when I got in the studio it was like click the metronome to record, next song, next song so when we were actually recording we were pretty spot on for the most part.

What do you think it is about California that produces such good bands?
EA: We ask the same thing about England! You have such great bands, it’s crazy cos it’s such a small country and in any other country the same size you’d get nowhere close to the same amount of great bands. People like Mumford and Sons, Arctic Monkeys, Adele. I think in California it’s just the weather. To quote best coast, we were born with the sun in our hair and in our eyes.

Have you had any time off whilst you’ve been over here?
EA: Yeah we’ve had a couple of days off. We were in Edinburgh a few days ago which was a lot of fun, everything’s really cool over here. We don’t really have places like that where we come from. Like, even the cobble stone streets are sick. The buildings are really old, and we went to a castle which we don’t have in America. We wanna go to the Harry Potter museum too when we’re in London, we wanna go to Privet Drive. We went to go see the Batman house, Wayne Manor when we were in Nottingham, I think it was called Wallerton Hall.

Watch the video to War: