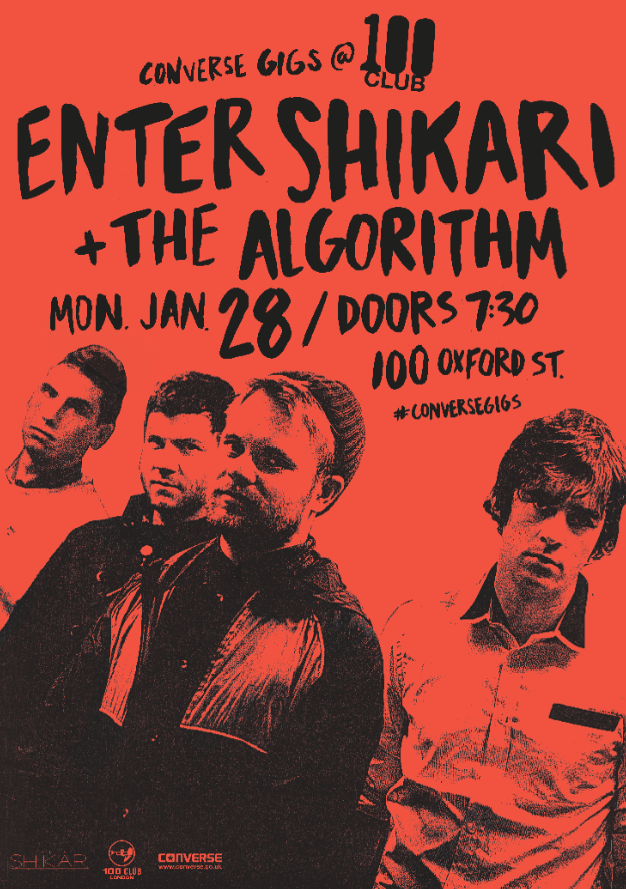 Following a amazing end to 2012, Converse Gigs are getting ready to kick-start the new year in style with an exclusive show by Enter Shikari.  Support on the night comes from The Algorithm.

2013 marks 10 years of Enter Shikari.  Since forming in school in Hertfordshire back in 2003, Enter Shikari has played over 1,000 live shows selling numerous prestigious venues worldwide. And now, the band will end their European headline tour by taking to the 100 Club’s legendary stage for a money can’t buy, up close and personal performance.

Support on the night comes from, The Algorithm, brain child of talented producer, Rémi Gallego.  Infusing modern metal breakdowns with a menagerie of electronic subgenres, this live experience promises to be unlike anything the metal or electronic worlds have experienced before.  After a successful premier of their live show at last year’s Euroblast festival.

Tickets are FREE and will be available exclusively via the Converse UK website www.converse.co.uk/conversegigs from THURSDAY 10th JANUARY 2013.

The Converse and 100 Club curated music series kicked off in June of 2011 when Graham Coxon headlined and played the first packed out show. Since then the likes of Gorillaz Sound System, The Rapture, The Vaccines, Chairlift, Ghostpoet, Azari & III, Wild Belle, Toddla T and many more have taken to the stage. Cementing the success of this unique partnership, Converse and 100 Club continue to deliver an exciting line-up for fans, showcasing today’s best and freshest emerging artists. The partnership also gives 100 Club the opportunity to introduce a new generation to its renowned gigs, by once again bringing the best music to its legendary stage. 100 Club will continue to oversee the schedule of performances as it has for over 65 years, in addition to presenting this new free series alongside Converse.