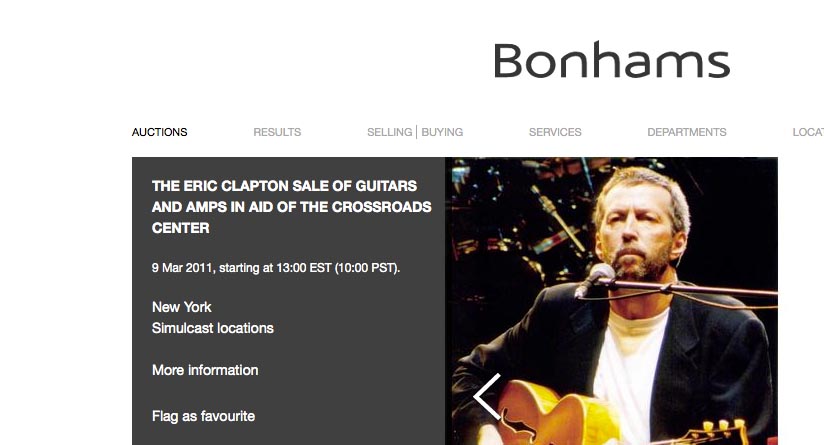 ”Money can’t buy you happiness” as the old saying goes, however,  it can buy you your own piece of Rock’N’Roll history if you know where to find it. – and that’s about the same thing.. right?

This year New-York City has remained the hot spot for fanatic buyers across the globe to invest thousands of dollars into mementos of music history.

The act of purchasing such historical memorabilia, from special-series guitars that Keith Richards blood and sweat  graced one steamy night in ’69, to transcripts of numbers and letters which, written by the right hand of Bruce Springsteen in ’64 while mapping out the fundamentals for hit album ‘Born To Run, has became somewhat of a controversial issue, with some critiques claiming the act of ”buying rock and roll” takes away the mysticism of the item, the motives and the era, believing that elements of the electrifying movement that came to life in the late 50’s were not meant to be ”captured or tamed” and instead left for the wind to have their way with.
Other music enthusiast however, see Rock’N’Roll, in all it’s glory, with the provoking sound of a 4/4 drum beat over-toned by a sexy lead guitar lick on a 1950’s style American Fender Telecaster, as an art-form. An art form to be celebrated, to be absorbed among the hands of a digital generation to recollect memories of where we once were and how we came to be, to feel the touch of an old, beat-up, rustic steel-strung stallion, crafted by the hands of Les Paul himself, in a way to feel as enticed as we felt the first time we heard ‘Vay Con Dios’ in 1961.

Bob Dylan is the latest Rock Commander to have his relics re-released for the eyes of Americas most extensive east-coast city of New-York.
On the 6th December, Christie’s Auction House, based in Midtown Manhattan, saw Dylan’s 1960’s-style Fender Stratocaster (with original strap and hard-case) sell for a staggering $965,000 (£590,430) – topping a previous Eric Clapton guitar auction sale by almost 10,000, making the instrument the most expensive guitar to ever be bought in auction. –And a big enough number to make Dylan’s current possible french law-enforced fine of €45,000 (£37,000) look like pocket money -.

The illustrious Srat became renowned for it’s appearance at the 1965 Newport Folk Festival, where fans were distraught when the acclaimed freedom rider exchanged his solid top martin for a more electrifying alternative, a moment in folk-rock/rock&roll crossover history which is a topic much confabulated among 21st century Dylan disciples.

Now, you may be asking yourself, ‘With ‘The Voice Of A Generation’ making headlines with his unimaginable auction record this week, who else could possibly compete with the Folk-Rock icon’? Well,  ‘The Boss’ of Rock’n’Roll ought to do it.
Bruce Springsteen has also made New-York City headlines when a one of his own artifacts sold for $197,000. Sotheby’s, based in the Upper East Side of Manhattan recently sold original manuscripts of Springsteens hand-written notes which where used in the process of producing The E-Street Bands third record, ‘Born To Run’. The piece of paper was encapsulated for some 40 years by Mike Appel, Bruce’s former manager whom fell out of favor with The Band after the release of ‘Born To Run’, to be replaced by John Landau.
The rarity contained a ‘near perfect’ interpretation of  the chorus of the 1975 hit title-track ‘Born To Run’ and record notes which had been used to guide a path for the song to drive.

Other Rock’n’Roll legends who have seen their history sold before them include Ronnie Wood, David Bowie and Eric Clapton, who have all bought in a respectable profit in the public and private sectors of society for their heroic heirlooms. To check out some of the objects of virtue that had been passed down from master to apprentice for the sign of a silver dollar you can head over to Bonhams, http://www.bonhams.com/auctions/19226/, and see heritage lay rusting with these rock remains.