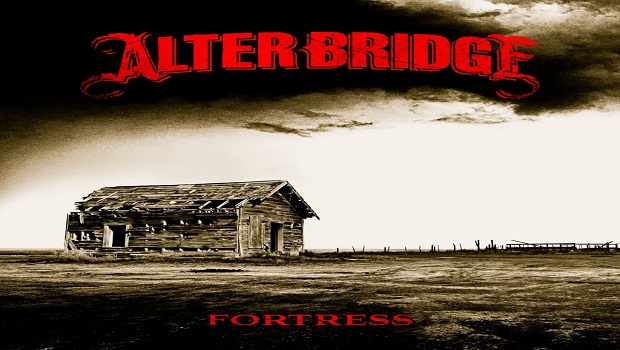 Three years have passed since the release of the critically acclaimed AB III. After a plethora of side-projects, Alter Bridge are back with a bigger, badder, heavier and more refined sound.

After hosting many headline tours and managing to sell out world famous venues, including Wembley Arena in London, we haven’t heard much from Alter Bridge in a while. For the past three years, we’ve seen and heard the members appearing elsewhere. Myles Kennedy enjoyed multiple tours with Slash, after featuring as the lead vocalist on the 2012 album ‘Apocalyptic Love’. Scott Philips formed a supergroup known as Projected, and released their first album, ‘Human’, last June. Mark Tremonti started a solo project, releasing his debut album ‘All I Was’ last July to positive feedback from fans and critics alike . But what does this mean for the band?

It basically translates into the Floridians being at a musical peak for their fourth studio outing. ‘Fortress’ is loaded with countless blistering guitar riffs and an oh-so-familiar sound that will have listeners, both new and die-hard, ecstatic from the get-go. ‘Fortress’ opens with the progressive essence of  ‘Cry of Achilles’, an incredible first song with an acoustic intro that wouldn’t feel out of place on a Led Zeppelin or Jeff Buckley album. About half a minute into this, however, the full band blast in with the first of many fantastically frantic riffs. The exceptional bass and drum work from Scott Philips and Brian Marshall, respectively, has to be mentioned here also. From the first track alone, anyone can tell they’re in for the ride of their life.

Following ‘Cry of Achilles’ is the first single to be released off the album, ‘Addicted to Pain’. While it may not be the song with the most complexity, it’s easy to see why this was chosen to promote the record. It’s an insanely fast number with a tightly woven riff reminiscent of Tremonti’s solo work. The chorus has an almost “bouncy” feel to it, which I’m positive will go down extremely well at gigs and festivals around the world. Thousands of fans jumping up and down along to the drum-beat of the chorus, singing along with Myles and the gang; I expect to see this song become a staple in Alter Bridge’s live set instantly.

The rest of the album doesn’t disappoint whatsoever. With a vast selection of stand out tracks, including the astonishingly epic title track ‘Fortress’  and ‘Waters Rising’, the first Alter Bridge song to feature Mark Tremonti taking charge on lead vocals.

On the subject of lead vocals, Myles Kennedy manages to prove once again why he is hailed as one of the greatest singers of his generation (and some would argue of all time) on pretty much every single tune within “Fortress”. He shows a whole new level of his ability to reach practically any note with his impressive vocal range in ‘Calm The Fire’. If you’ve heard his stuff with Slash, and somehow have managed to go all this time without listening to Alter Bridge, “Fortress” would definitely be a good place to start.

Alter Bridge are quickly cementing their position as one of the top hard rock bands in the world, and I highly recommend you do not miss out on “Fortress” as it is an astounding addition to the band’s repertoire.

Check out ‘Addicted to Pain’, the first single from ‘Fortress’, below: