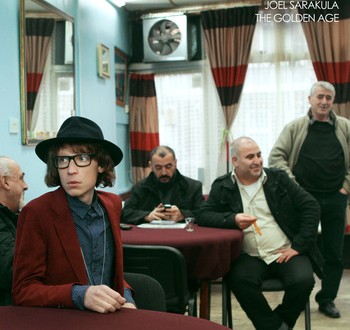 Aussie quirky popstar Joel Sarakula has released his debut album and it has been a long time coming. Having travelled the world looking for inspiration, he has now settled in London and got to work on a ten-track record that has so much of his retro influences embedded in it. These include David Bowie, Kate Bush and Pulp and I think that all of these are pretty evident in the album.

There is, however, a lot of modern elements in it with the inclusion of electronica in a few of the tracks and the contemporary trend of throwback tones and styles.

It begins with disco pop track “I Will Deliver” , which has a real 70’s theme to it. A guitar pulses, the bass brings the funk and a wooden click beats in the back. It’s upbeat and friendly while still avoiding the cheese that could so easily have been created as a result of the quirky, retro pop style. Moving on to the piano introduction of “Old Yellow Photographs” with its dreary indie vocals overhead. The drab vocal delivery is contrasted with the summer-sounding retro vibe and it ends up being quite a nostalgic look back to the chilled age of the 60’s.

The Lows holds the first glimpse of the electronica which bounces through the intro. Soft indie vocals and a slow, staccato guitar arrives and remain, making it quite repetitive with a lot going on in the back. There is also a floaty quality to the back up vocals, reminiscent of those in “I’m Going Home”, the finale of The Rocky Horror Picture Show. It transforms into quirky Bohemian, which is classic British indie with an American slant on the vocals. A low piano runs in the background with ascending chimes accompanying it. It has a real catchy melody and the chanting nature of the ending makes it a ready-made live track.

At the halfway point is “Present Tense”, which has retro piano notes and makes it sound quite like a trendy TV advert that would be put behind some kind of montage. The drums add a new layer in the second half of the song and the swaying riff keeps it relaxed while the piano, which is in fact the same few notes over and over again, dominates the backing. Turning into “Only One Still Dancing”, which again has the quirky bass and jazzy piano notes. Joel’s vocals become a little like Jake Shears in this disco-inspired pop number.

“Matchstick Girl” is one of my favourites on the album with its rippling riff and barely-there whispery vocals. It has a great catchy summer feel with a fresh ending, shared by the brooding bass and clashing drums while a guitar sings alone in the smokey atmosphere that has been created. It sets things up for the darkest track on the album, Shadows. The piano plays a haunting opening sequence and the vocals drawl in a ghostly manner. The guitars have a blues theme and add to the downbeat, stark nature of the song. It really stands out on an album full of upbeat songs.

“Good Books” has a soulful jazz theme to it with a constant bass buzz at the back. It’s a great radio-friendly song that would be perfect background to your summer barbecues. Again, the 60’s backing vocals make an appearance and another catchy chorus under his belt. It ends on “Who’s Gonna Love You” Now which is shrouded in a smokey atmosphere with whispery sleepy vocals. It’s a dreamy pop ballad with chimes in the chorus and haunting female backing singers giving it the retro “ooh la la”. It’s another slow, dreary track with a ghostly theme and it’s probably influenced heavily by Joel’s world travels.

It’s certainly a varied album with a lot going on. There are some definite retro references in these tracks with the odd modern element thrown in. It also seems to be thoroughly researched and inspired from a lot of different sources. Joel should be extremely proud of this quirky and original-sounding debut album.