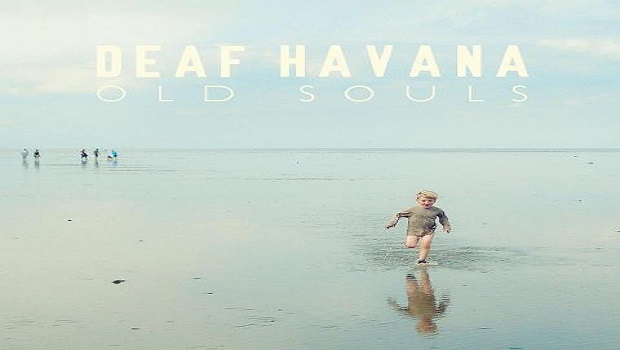 I’ve long been a fan of Deaf Havana and after hearing the lead single Boston Square back in May, it only promised great things from the upcoming album.

The Kings Lynn alternative band’s new album ‘Old Souls’ follows 2011′s ‘Fools and Worthless Liars’, which received rave reviews from the press. Their sound has indeed shifted on the new record and a lot of the tracks are more pop based with a healthy portion of ballads too.

Starting with the lead single ‘Boston Square’, it gets off to a ‘Fools and Worthless Liars’-esque beginning. However, the title of the album quickly becomes apparent on following track ‘Lights’. A slow piano with a building riff backs up a nostalgic vocal, looking back to a time gone by. Many songs on the album do this, therefore reinforcing the theme of memories, which in turn become the “old souls” of the album. ‘Lights‘ is a chill out summer song with a pop melody and an Americana twist.

Other old souls are ‘Night Drives’ and ‘Kings Road Ghosts’. The former has a rippling acoustic riff and soft melodic vocals. A tinkling effect is present in the chimes and there is a melancholy feel to it, full of regret. The instrumental is atmospheric and passionate vocals give way to a folksy riff, which I love. It climaxes in a beautiful instrumental with layers of singing guitars and crashing drums. ‘Kings Road Ghosts’ teams a fast drum with a chilled bouncing riff. A deeper voice with another American twist in the guitar, it explores how time moves on and lives change, which makes for a beautiful and emotional ride.

Stepping outside of their comfort zone, they visit both the folk and the jazz scene on ‘Everybody’s Dancing But I Want To Die’. It’s all about trying to impress someone but failing, making it a bit of a nerd anthem. A catchy chorus, which Deaf Havana are kings of, is included and a jazzy accordion sound introduces the blaring saxophone-led instrumental. The jazz thread is picked up again in ‘Speeding Cars’, which features piano-backed melodic vocals and a throbbing riff. It’s probably the most commercial song on the album with a passionate vocal delivery and another American influence in the guitar.

Touching on the blues on ‘Subterranean Bullshit Blues’, the murky vocals contrast the Fall Out Boy style chorus. The riffs whine and screech but it becomes quite boyband towards the end. The high wails at the end are reminiscent of Patrick Stump but the strong pop sound keeps it somewhere between the Illinois emos and a retro pop band of the early noughties. 22 is another song which touches on the Fall Out Boy sound. A pop-punk intro becomes a fun, youthful, melodic track about being with someone who makes you feel old before your time. It’s a great live track which relates directly to their young fans.

Reverting to an indie basis on ‘Mildred‘ sees them take a retro stance. Again, nostalgic lyrics are delivered passionately with catchy melodic riffs. Drums build up an instrumental with a mechanical guitar to end. The old-school theme is continued into ‘Tuesday People’, which sounds not unlike the theme from an Aussie soap. Melodic vocals are supported throughout by resonating “ooh ooh oohs”, which eventually become quite a ghostly presence cropping up at different moments in the song.

Something different from them again is seen on the Eastern-inspired Saved. It’s a deep, serious song about regretting bad behaviour from the past and having to face the long term consequences. Asian sounding whistles and intricate guitar patterns weave their way through the ethereal soundscape which makes up this pretty deep ballad. Closing track ‘Caro Padre’ is another eerie sounding, meaningful track. Again, it’s a deadly serious story about being abandoned by a father as a child but realising similarities between yourself and him in adult life. Choral backing vocals provide a haunted feeling while magical sparkles launch a big bass and drum instrumental with passionate emotional vocals.

Ending on a story of self-discovery is telling and really poignant as it indicates the nature of the album itself. Looking back on past versions of yourself makes you realise how far you’ve come. ‘Old Souls’ is a reflective record with many different bases touched meaning you’ll get the full blast of the many faces of Deaf Havana.