Review: Alaska Campus – When We Were Young 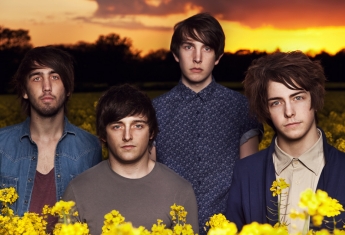 A little bit Kooks, a little bit You Me At Six and a whole load of melodic guitars encompass an upbeat, quirky sound that is bound to catch on a loop in your head. When We Were Young is Hertfordshire band Alaska Campus’ second EP, following on from last year’s Keep Yourself Warm.

Opening with a catchy indie track called You, Me And The Sun, which incorporates an unusual hollow wooden block into the backing of the second verse. It gives it an old-worldy feel and is something that really sets it apart from the ridiculous amount of indie tunes around today. With melodic guitars and a young refreshing sound with a tinge of pop-punk to the vocals, it’s an all-round favourite.

Drifting on to Roseanna, a pretty love song with a doleful vocal. Plenty of longing and romantic laments make it a track that is packed with emotion. A chilled intro with plenty of passion, it’s one for every sucker for an atmospheric live track, as the guitars slam home the aggression. A mixed bag of feelings create this altogether beautiful song.

Mon Reve is a classic British indie song with a twist of American pop punk vocals, which Alaska Campus seemed to have adopted. The strongest resemblance to fellow alternative rockers You Me At Six is shown on this track, as the riffs are simple but original and leave you thinking “hey, that’s pretty cool”. The staccato, plodding riff instrumental is particularly thought provoking and it has such a catchy rhythm. In fact, it’s the rhythm not the words that will stick in your head.

Stark, slowed down ballad Story Of Alaska Pt.1 does verge on emo particularly in the vocals, which are a little dreary and monotone. The instruments really amp it up at the two and a half minute mark and transform it from a bare, isolated vocal track into an electrifying show-stopper. The title is certainly intriguing and it doesn’t go unnoticed that the track shows all aspects of what the band can do. A really band-personal song with a possible great story.

Closing the EP with Control, the band leave us with an upbeat sunny outlook. Although British indie/alternative music tends to weigh heavily on the slamming guitars and gritty vocals, Control is a track which puts back the happiness. The quirky indie vocals have returned and it’s all about the ringing guitar solos. Instrument central, it’s a little thin on the ground when it comes to lyrics but this EP isn’t about creating great literal narratives.

The instruments really speak and despite there being a couple of tracks, which give way to the riffs and beats of musical solos, it still tells a multitude of stories. As I said, they’re a band I’m really excited about.