A Q&A with Marianas Trench 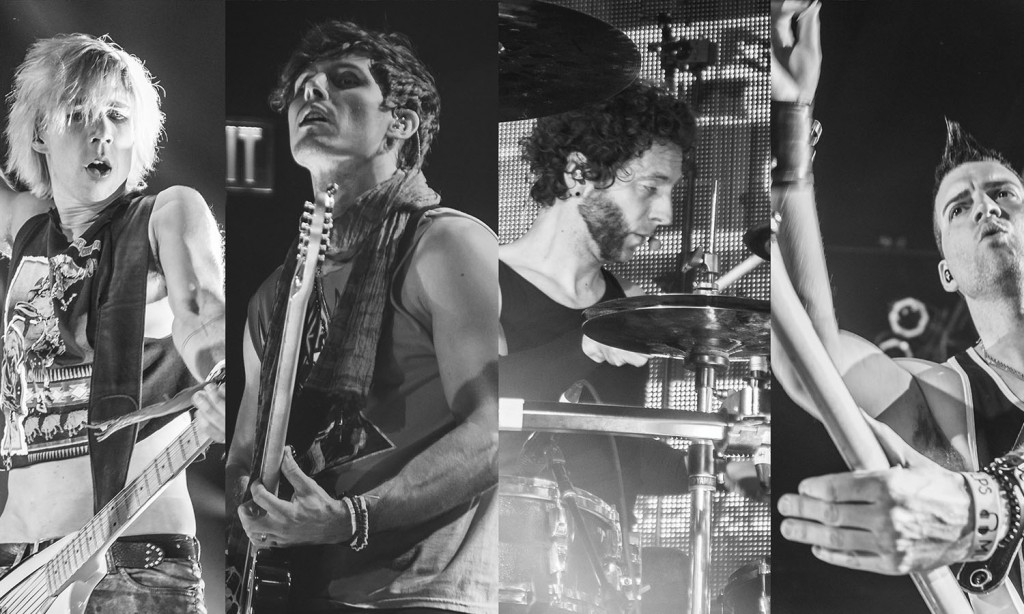 Marianas Trench, the multi-platinum selling Canadian pop punk band, are on the UK leg of their Final Countdown European Tour. The aptly named tour sees them stop off in 10 UK cities to stage what could be their most electrifying performances yet. Marianas Trench have amassed a huge legion of fans in their native Canada and now they’re bringing their unique brand of pop-punk across the Atlantic to show us Brits what all the fuss is about.

Josh Ramsay, Matt Webb, Mike Ayley and Ian Casselman formed Marianas Trench in Vancouver in 2001 and debut album Fix Me was released in 2006. Albums Masterpiece Theatre (2009), Ever After (2011) and Astoria (2015) followed, each one showcasing their musical evolution from raw, gritty punk to polished pop to heavy rock riffs via movie soundtrack production. A whole spectrum of musical artists are cited as influences, with lead singer Josh noting “I’m really all over the place with influences. I think that’s why our band has such a unique, yet eclectic, sound. Bands that did artsy complex vocals with high theatric concepts like Queen and The Beach Boys, some RnB artists like Michael Jackson and Stevie Wonder, some good old rock and roll like early Foo Fighters and Aerosmith and pop like George Michael and Tears for Fears. In the end, if it’s a good song, I like it. I’m not very concerned with genres. What defines a genre is more about the production than the song itself.”

Their line-up has remained steadfast from the very start and when questioned about what the key is to their longevity Josh said “We’re pretty much like brothers at this point and we’re often around each other 24/7 so giving each other space is key. Once you’ve made it through touring out of a van for 3 years you can make it through anything. You can always tell when someone is having a bad day so you just give them what they need to help them bust through whatever they’re going through.” A shared love of what they do is clear: “We’re honestly having a ton of fun right now. We don’t hit too many speed bumps anymore.”

The band’s popularity in their native Canada is monumental and with that comes a dedicated legion of fans. So they’ve experienced some pretty bonkers fan moments in their time, one of the craziest being when someone gave them a doll they’d made that was meant to look like Josh. “They cut off their own hair and used it on the doll. It honestly looked like a Voodoo doll so we buried it where it could never be found.” It’s been over a decade since their debut album was released and in that time no doubt they’ve all experienced some pretty thrilling moments but when asked what the highlight of their career has been so far Josh says “actually, we’re living it right now. It’s pretty amazing to be able to tour the world playing music for a living. Europe is gorgeous and there is so much history here. We only wish we had more time between shows to enjoy all these cities we’re seeing for the first time.”

This European tour is the perfect opportunity for them to showcase their new single Who Do You Love. It’s a song about getting back on your feet after the set-backs life challenges you with. Josh’s isolated vocals introduce the track and the gentle keys and percussion build up, helping the message to resonate. Josh’s vocals are given even more prominence as the choir harmonies kick in, further emphasising the importance of coming together and facing problems as one. The heavy drum beats and pared back guitar riffs are the only odes to the classic Mariana’s Trench sound as this track has a much more grown up feel and represents a move towards experimentation with a new sound.

The accompanying video also further emphasises this move towards a more mature chapter for the band. They are noted for their music videos which combine light-hearted messages such as the one for Pop 101 in which they satirise the pop music industry, combining clichéd pop hooks and digs at some of the pop music industry heavyweights all against a video backdrop which makes fun of stereotypical music videos. The message Who Do You Love’s video portrays is one of selflessness, bringing joy to others by random acts of kindness and giving back to the community around you. The band used their video production budget to make a video that would inspire others to go out and do something selfless for others. Among the charitable actions in the video were buying toys to donate to an RSPCA centre, sponsoring a kennel for a year and donating to a food bank. The people’s reactions to these good deeds are all genuine and the message here is truly inspirational. Speaking about why they decided to create a touching video like this Josh said “Sometimes it’s not about saving the world. Sometimes it’s nice to just support your local community. We each chose what we wanted to do for that video, and how much of our personal lives would be shown. I think that gave the video a real sincerity, where it could have felt cheesy if we did it poorly. I loved donating all of that stuff to the animal shelter. My dog came from that shelter and she’s a total badass. I’m proud to have been involved in that video. It’s nice to do something for other people and for animals, rather than “looking cool” for a standard music video.”

With four albums under their belt, all unique in their own ways, and a wealth of songs that are all catchy hooks and addictive choruses, it’s a wonder where songwriter Josh looks to for his inspiration. But the answer, it seems, is simple: “I only write about my life. I think when you invent for songwriting, you don’t get a very emotive song. And if the point of art is to express yourself, why not use your actual feelings? As for videos, each one is different. The main thing is to do something that supports the song. A bad video can ruin a perfectly good song.” From where the band are now, it’s clear that they heed their own words.

When asked what venue in the world they’d love the opportunity to play Josh picked Wembley Stadium. “If you’re playing Wembley you’ve definitely made it.” Well they’re not far off as they’ll be taking to the stage at another one of London’s iconic venues next Friday: Koko.

The Final Countdown Tour is happening right now so find out the full list of tour dates here. Have a listen to new single Who Do You Love with its heartwarming video below and also their debut single Say Anything to get an idea of their musical evolution.