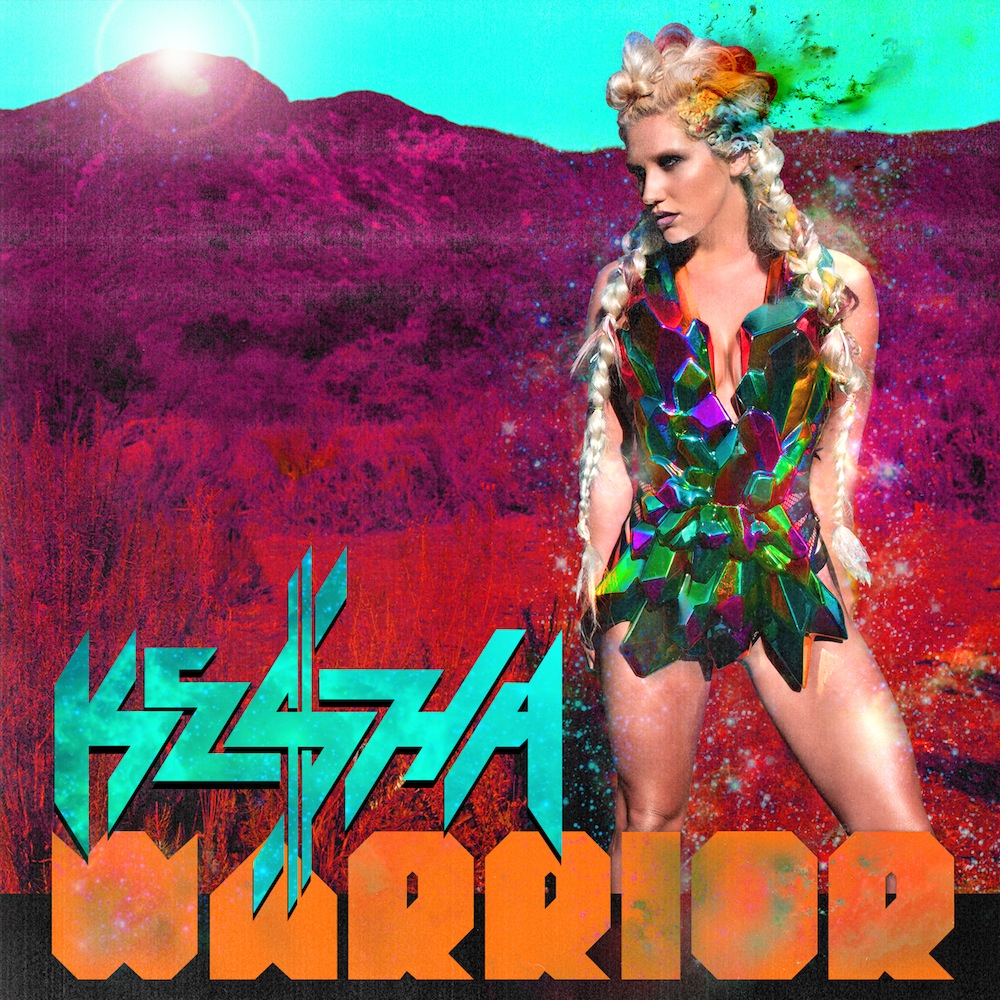 It’s easy to give Ke$ha a bad time. A young, successful, mouthy blonde. A multi-award winner. Singer, actress, rapper, LGBT campaigner, collaborator, fashionista, icon. An individual dedicated to the proliferation of a party hard/bone everything attitude, whos devotion to her cause and hard-nosed business approach has earned her huge success. She is vehemently reviled and held in contempt by a world unwilling to accept her mission, but perfectly happy to buy her records (33 million between singles and albums and counting). Her new full length, Warrior, is a hand-woven tapestry of pinpoint dancefloor candy and heartfelt confessions.

First things first – the autotuned vocals. Much has been made of Ke$sha’s inability to sing, but Autotune was created to help people who can’t sing spare their blushes. Here they are used as a signature; every word has a clipped, compressed aspect to it, like she’s singing while swallowing coins. Second, the rapping. Despite endorsements from Snoop among others, it is lyrical nightmare fuel. It also calls to mind Eminem if he was 11 and a woman, which is a bit surreal, but perhaps this is intentional. Thirdly, the look-at-me swearing. Many young people will look up to Ke$ha, principally because of her success, but also because of her devil-may-care approach to life. While it is both clever and original to tell anyone who will listen that you and those you speak for ‘don’t give a fuck, ‘cos that’s just who we are’ (Crazy Kids), it is little kids stuff, teenage posturing at its worst.

These foibles aside, let’s get stuck into this album. Ke$ha’s second full length had a shortlist of 200 songs, mercifully shortened to a scant 12, unless you are lucky enough to get the deluxe edition with 14. It’s a surprisingly wide-reaching affair, with the usual club-fillers balanced 60/40 with slightly more sentimental fare like Wonderland.

First and title track Warrior is so ugly this writer felt unsure the whole record could be completed without a series of stress-relieving murders. Completely devoid of likeability, Ke$ha’s exclamations of outsiderdom made my blood dance. Perhaps though, this is wrong, and stars like her are the new vanguard of the disenfranchised and unhappy?

The whole album resonates with two themes – partying and its associated activities (intercourse mostly), and the weight of sorrow felt by those who are cast out by society. Though it would be child’s play to imagine Ke$ha’s target audience as those least likely to require emotional reinforcement, this would be unfair, unkind and churlish. Tracks like Die Young (her latest no. 8 single) scream youthful rebellion from the rooftops. Live for now, it says. Give no consideration to consequences. Do whatever you want.

I must break here and say that I went into this album with treacle-thick venom pumping through me, every micron of my double helix replete with hatred for this slack young woman’s ‘shag if it moves, drink it if it doesn’t’ approach, her utterly dismissive brazenry leaving me boiling with rage. But this is wrong. This record wasn’t designed for me. It was designed for people younger and more woman-like than me.

The last number put the record in context. No-one likes Ke$ha because she’s devoid of shame and successful. A lot of this record is well constructed, ballsy, engaging and strong. Supernatural has a wicked breakdown, Wonderland is touching and honest, Beautiful Life has plenty of merit. The harmony vocals are well laid out, the choruses are, for the most part, bomb proof. Writing off artists in the mainstream who like a bit of a rodding is churlish and mean, I’ve done it myself in the past. This is a good record for what it is, and how it’s meant to come across.