Album Review: Walking On Cars – Everything This Way 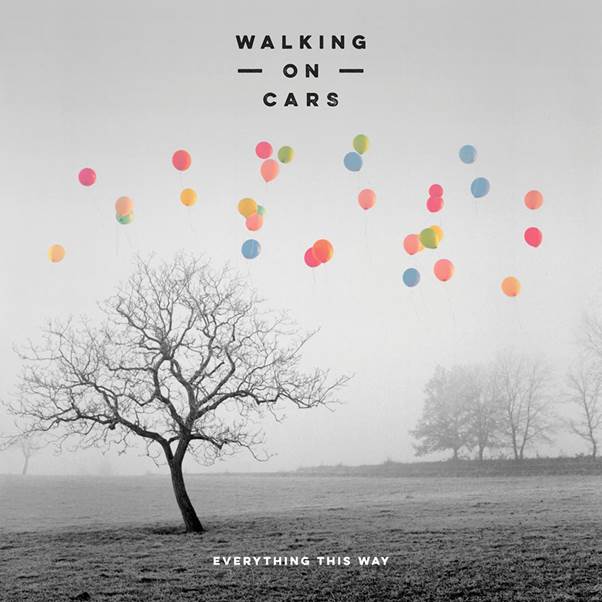 Walking On Cars - Everything This Way

Each song is clearly crafted with a lot of care, leading to a stunning, near-perfect debut album for Walking On Cars.

For around six years, Kerry rock-pop band Walking On Cars have been relentlessly gigging both around the country and internationally, honing their craft and steadily building a loyal fan-base. This year, they treat that fanbase with their debut album: Everything This Way.

Years of concerts and festival appearances (including playing at Dublin’s own New Years Eve Festival) has led to Walking On Cars growing a rather large fanbase throughout Ireland and across the sea. The band have steadily released singles and produced music videos to help promote their sound, leading to the release of their first album, Everything This Way. Fortunately for long-time listeners, all of the songs you’ve heard in live settings or via music videos and single releases are available on this album, but it makes for a wonderful introduction to the band if you’ve yet to fully dive into their song repertoire.

The majority of Walking On Cars’ songs aren’t exactly known to be uplifting, but they’re each clearly crafted with a lot of care and the result is an album filled with beautiful, catchy tunes. Opening the record is the fan-favourite and live set staple ‘Catch Me If You Can‘. This track tells you everything you need to know about the band before you progress through the rest of the album. From Patrick Sheehy’s unique vocal style all the way back to Evan Hadnett’s technically sound drum work, ‘Catch Me If You Can’ is a superb choice to kickstart this studio effort.

It’s pretty difficult to narrow the album down to a few stand-outs, but both ‘Two Stones’ and ‘Don’t Mind Me‘ come close to making a list of that nature. Both songs feature mature, yet relatable, lyrics and beautifully performed piano pieces from Sorcha Durham that surely is to be noted as a hallmark of Walking On Cars’ style.

While ‘Ship Goes Down‘ is another great song, it’s Dan Devane’s guitar work that steals the show. The overlaying harmonics and riffs add an extra punch that brings the track to that next level, which it may not have otherwise reached. It definitely isn’t the strongest song you can find here, but it’s followed by one of Walking On Cars’ best songs released to date.

‘Speeding Cars‘, although released last October, is Walking On Cars’ latest single and music video. It’s no wonder why this was chosen to represent the band; It’s a gorgeous track with stunningly deep lyrics backed by haunting piano work and perfected with a ridiculously catchy chorus.

“As I mentioned before, it’s hard to pick any one “stand-out” song on Everything This Way, which is far from a bad thing. Walking On Cars have managed to construct a near-perfect debut album containing a minimal amount of hiccups”

The atmospheric vibes of ‘Love Backs Down’ is a welcome change to the fairly repetitive formula of the other songs on the album, but without the mid-song breakdown it would’ve easily ran the risk of being the weakest, most forgettable song heard here. Luckily, the familiar tunes of past singles ‘Always Be With You‘ and ‘Hand In Hand‘ quickly reinvigorates the listener’s interest in Everything This Way soon after.

Following this is a previously unheard track, ‘At Gunpoint‘. This is actually one of the more upbeat songs by the band, and it wouldn’t seem out of place if it was performed by a group like The Coronas. It would’ve been nice to hear more songs with this sort of tempo on the album, as Walking On Cars obviously have the ability to produce high quality songs of this nature. It’s a welcome change of pace, regardless, and I wouldn’t rule it out for a possible single release in the future.

The intro to ‘Tick Tock‘ sets up the tone for the entire track – a contrast of quiet and subtle guitar picking followed by louder, heavier chords backed by Hadnett’s drums. The lyrics in this number will stunningly resonate with every listener, as Sheehy suggests “this is the last time I stay up all night / forget everything / and I’m starting with you”.

The album closes with ‘Flying High Falling Low’ and ‘As We Fly South’, both of which are excellent tracks, but especially the latter. ‘As We Fly South‘ centres mainly around Sheehy’s vocal skills, which, if you’re not impressed by at this stage – you will be on this track. Sheehy showcases his vocal range, while the band further exhibit their ability to beautifully harmonise behind him.

As I mentioned before, it’s hard to pick any one “stand-out” song on Everything This Way, which is far from a bad thing. Walking On Cars have managed to construct a near-perfect debut album containing a minimal amount of hiccups. Almost any of the 12 songs here could be chosen to feature as the band’s first single of 2016, and we’ll keep a close eye on which one they choose, as well as whatever these guys have up their sleeves in the future.