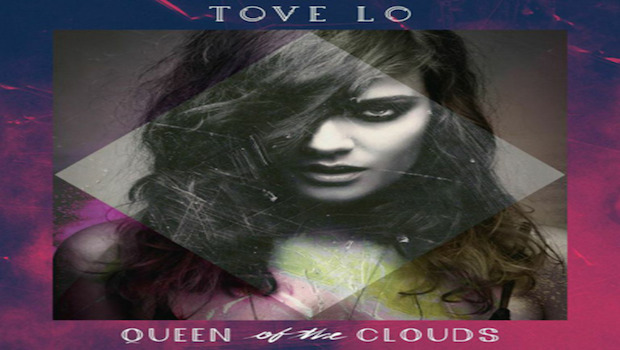 At this moment in time, Tove Lo is probably the biggest Pop star you’ve never heard of.

Her hit single ‘Habits (Stay High)’ has been the sleeper hit of 2014, climbing to high chart positions in a multitude of countries over a number of months. Hailing from Sweden (AKA, the homeland of pop music), the “Overnight” sensation has now put out an album as driven as it is personal.

Lo’s debut album, ‘Queen Of The Clouds’ is, of sorts, a concept album. Divided into three chapters, the album talks about three stages of a relationship; The Sex, The Love and The Pain. The four songs of each chapter captures the emotions that characterise these three segments perfectly. “The Sex” talks of the lecherous and reckless beginnings, with infectious and tongue-in-cheek stampedes of uptempo pop. “The Love” boasts a thunderous yearning through gigantic mid tempo, electronic balladry. And “The Pain” picks up the debris that comes with destruction of what is now over through distraught lyricism and melancholic pop.

Chapter 1: The Sex: “The passion in the beginning is always gonna be the best part of it”. There’s a subtle urban thread sewn through the contours of album opener ‘My Gun’; a solid pop track textured with trace elements of Dancehall that wouldn’t sound out of place on a Rihanna album. The lyrics (like all of the songs when put in context of their corresponding chapters) are sheer no-filter, as Lo refers to her lover as “My Gun” and sings of feeling a release of pleasure; “Boy, if you’re gonna shoot me down/Do it gently”.
‘Like Em Young’ is driven by a tribal-infused rhythm coated with a parade of dub-bass. The smirking lyrics are somewhat satirical in that she throws jibes at critics to girls who criticise her taste for younger men “Hey girl, why you judging me/When your, your guy is turning 53?/ I don’t know what really gets you more/Is it that my guy’s gonna live out yours?”

Upcoming single, ‘Talking Body’ is the point in the chapter that keeps you hooked for the remainder of the story. Salivating with carnal lust, the lyrics on the verses find Tove in a somewhat tragic state of idée fixe towards her partner, revolving her life around him. Meanwhile the chorus, musically armed with heavy propulsion, see’s her objectifying his model physique.
Rounding out “The Sex” comes the frantic ‘Timebomb’. The track is a sonic bombardment of euphoric chords and drums with a chorus as explosive as it’s title suggests. Tove’s melodic structure falls into a rather clumsy area as a seemingly endless army of syllables battle their way into the track for a space.

Chapter 2: The Love: “And then you freak out, cos suddenly you need this person”. “The Love” commences with the volcanic ballad ‘Moments’, an atmospheric ear worm accompanied by flavours of trippy samba. ‘Moments’ is a confession of flaws before brilliantly declaring “On good days, I am charming as fuck!”.
The Dubstep flourishes that flow throughout ‘The Way That I Am’ are every bit as pained and filled with passion as Tove’s soulful rasp. The lyrics cry out for the protagonist to be loved for who she is; flaws and all.

A pure pop-heartbeat breathes life into ‘Got Love’. Following her cries for love, Tove takes her throne as “Queen Of The Clouds” on the track’s unwavering positivity. Here, she rejoices the exultant feelings of first falling in love, declaring; “Good enough to make the ocean look like it’s a pond/Good enough to turn the valleys into mountain tops”. And following that, she also notes the feelings of immortality; “We live like legends now, know that would never die/Oh, we Got Love”.
“The Love” comes to a close with the power pop heavyweight ‘Not On Drugs’; a guitar-led song that tackles an infatuation so bewildering, that it takes control of your behaviour, creating a face of intoxication. The track’s arena-sized chorus carries such a pressure that it could be compared to the force of said infatuation.

Chapter 3: The Pain: “And then there’s no good way to end things, cos it’s ending, y’know?” The final chapter begins with gripping thunder-ballad ‘Thousand Miles’. The lyrics depict Tove lost in obsession over her lost love and desperate to get him back, even if it means running for a thousand miles to do it. The music is every bit as determined as Tove’s resolve and it all comes together to create a brilliant song.
Tove’s emotional unravelling only worsens as she dives into a life of hedonism on debut single ‘Habits (Stay High)’. The narcotics that lace the Purity Ring-inspired track create a calm like that of morphine as Tove self-medicates in order to cope living without her lover.

‘This Time Around’ is a dark Charli XCX-style lament that reflects on lessons learned from giving away your heart as a whole. It’s easy to hear the heartbreak in Tove’s voice, particularly on the yearning of the chorus.
The album closes on a bittersweet note with ‘Run On Love’; a collaboration with Swedish producer Lucas Nord. The cut is an easy going dance track where Tove picks up her black and blue heart and chooses to stop being a victim, by living in the moment and enjoying what time the lovers have before the affair runs out of steam.

As a whole, Queen Of The Clouds is a powerful album; the instrumentation is every bit as beguiling as the lyrics are full of stark, heart-on-sleeve honesty. Tove Lo has a lot of star quality and has potential to go even further that the stunning collection that is her debut album.

‘Queen Of The Clouds’ will be released in the UK in early 2015.
Watch the lyric video for upcoming single ‘Talking Body’ below: