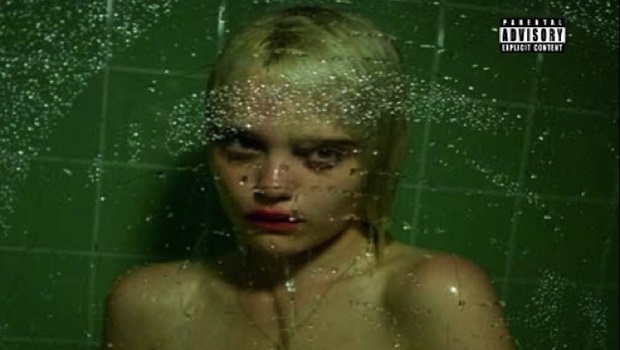 It’s been a stressful 6 years for 21 year old, Sky Ferreira. At 15, she was signed to Capitol Records under the wing of pop production super-team Bloodshy & Avant in hopes of becoming Britney Spears 2.0…

Sadly, Sky’s label weren’t as committed to this idea as herself and fans had hoped; After choreographing a pair of singles (‘One’ and ‘Obsession’) and an EP (‘As If!’), the label seemingly gave up on Sky and the album was shelved.

Fast-forward nearly two years, after an extensive modelling project, Sky returned from musical-limbo with a new sound and look with a well crafted, albeit, slightly scattered EP titled ‘Ghost’. Amongst the Grunge and Singer-songwriter Folk pop, one particular cut stood out and became a favourite amongst fans and bloggers alike; a sparkly and dreamy 80’s number titled ‘Everything Is Embarrassing’, a Dev Hynes (Blood Orange) collaboration that became an unexpected Alternative Pop hit for the former pop princess.

Just over a year after the release of the ‘Ghost’ EP, Sky, at long last, released her full-length debut, ‘Night Time, My Time’. And as the intrepid album cover may suggest, it is by no means a pedestrian pop album. But rather builds around aloof Indie Noise Pop and hazy-yet-rigorous Electro Rock to create a thoroughly enjoyable 80’s-inspired ruckus. Her co-pilot on this project, is the prolific Ariel Rechtshaid, known, not only for his work with the likes of sibling trio HAIM, Solange Knowles and Sky’s dark-pop parallel Charli XCX, but also for adding a fresh-faced surface to the retro sounds of his collaborators.

The album itself explores a lot of different influences; ‘24 Hours‘ is one of the more obvious Pop moments, but it’s not without it’s Blondie-inspired New Wave charm. Half way track and lead single ‘You’re Not The One‘ remains a highlight since it’s debut and shows off Sky’s unexacting cool with hooks-a-plenty and serrated guitar licks. ‘Heavy Metal Heart‘ is a razor sharp and radio-ready “Riot Grrrl” moment jam-packed with ferocious guitars and metallic percussive crashes. ‘Love In Stereo‘ sounds as though Sky was listening to her debut single ‘One‘ and decided to rework so that it would sit comfortably on the album’s tracklist. This is, of course, a welcome addition to the album, as it reminds us of Sky’s Dance Pop roots and could’ve been a hit in the 80’s and keeps a door open to those who knew Sky as an Electropop artist.

While the album has it’s fun moments, it’s not without it’s threatening grit. No more than on the title track and album closer is this evident. ‘Night Time, My Time’ is probably the most unnerving moment of the record as Sky drones preternaturally in the background as the track itself staggers and grows with heavy eyes through it’s four minute time-frame to a crescendo and then… Silence. What feels really clever about having such a languid number as a closer is that it feels as though Sky has shared what she needs to for this chapter and is ready to go back into hiding until the next chapter is written.

Given how many false starts she’s had, Sky’s more ardent listeners may see this project as a heavy sigh or relief rather than a wonderful first impression. But nevertheless, her persistence has given us a solid effort and will no doubt make newer fans want more.

Sky Ferreira – Lost In My Bedroom on MUZU.TV.