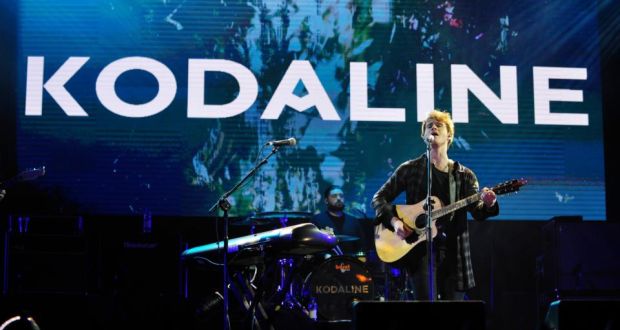 A fantastic night of music right in the heart of Dublin's city centre as Kodaline gave a send off to their breakthrough year and opened the year of their second album.

Dublin was well and truly alive for the end of year celebrations, showcasing plenty of music events across the city centre.

Kicking off our New Year’s Eve celebrations was Dublin’s iconic Ruby Sessions, moved to Smock Alley theatre for their last night of 2014.

Talented acts The Young Folk, Sive, Tim Chadwick and I Have A Tribe all took to the old style, quite historical looking stage for what were all impressive sets, highlights being Sive and Tim Chadwick.

Next up for us was Walking On Cars kickstarting their set in College Green, right in the middle of Dublin’s city centre on the big stage. Excelling mainly familiar classics, the Dingle five piece performed tracks such as ‘I’ll Always Be With You’, ‘Hand In Hand’, ‘Don’t Mind Me’ and ‘Catch Me If You Can’. Having had an already very successful 2014, the coming 2015 is looking even more promising as they look towards their debut album.

Up next at College Green was The Dublin Legends. Iconic and fun, these gentlemen half surprisingly had the growing crowd full of energy and participation, singing almost every song in numbers. Keeping the spirits of traditional music up, The Dublin Legends made their mark once again at NYF.

James Vincent McMorrow was the last act  before headliners Kodaline took to the stage. Flaunting his flawless unique vocals through tracks mainly from his latest album ‘Post Tropical’ besides opening on ‘We Don’t Eat’, James executed was couldn’t be faulted as a performance. The question of whether he was a suitable act for the night itself may attract a different response as it seemed to just take the ambience down a notch or two.

As Kodaline stepped on stage, fifteen minutes before midnight mark, they belted into ‘One Day’, getting the crowd going, and furthered that with the hit single ‘Love Like This‘. As RTE faces, Katryn Thomas and Paddy McKenna stepped on stage to ring in the new year, fireworks and an excited crowd took over the city.

Bouncing back with their new single ‘Honest’, from their forthcoming album ‘Coming Up For Air’, Kodaline played us into the first few minutes of 2015. Other stand out tracks from their set were ‘Brand New Day’, ‘Way Back When’ and new song ‘Love Will Set You Free’.

Of course, the iconic ‘All I Want’ played the night out with the guys diving back into the final Kodaline-stamped “oooh” bridge of the track, riling a last sing along from the 12,000 capacity crowd.

A fantastic night of music right in the heart of Dublin’s city centre as Kodaline gave a send off to their breakthrough year and opened the year of their second album.