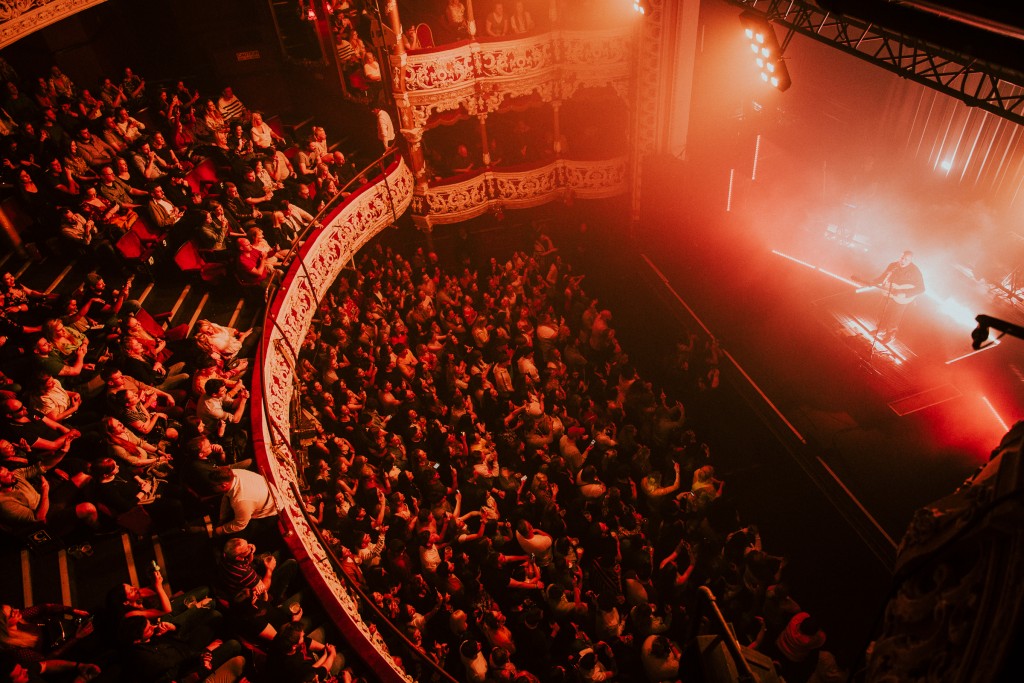 ...to a standing ovation well-earned

A nod to the years Dermot spent honing his craft on the streets and intimate venues of Dublin, and a mega salute to his intricate lyricism and unmatched songwriting abilities.

Going from strength to strength has never been a more accurate phrase than when looking at the recent success of Irish artist, Dermot Kennedy. Currently on his European tour, he dropped by to treat a mega hometown crowd to 4 sold out nights at the Olympia…

We were lucky enough to witness the Tuesday night, with support from the soothing vocals and heartfelt songwriting of Vancouver’s very own Luca Fogale.

Luca’s gentle and smooth opening 30 minute set was the perfect build up to the main event, as the iconic Dublin venue filled up, and the pit was already hopping with eager eyes and appreciative rounds of applause. Stand-out track of the set was definitely ‘Half-Saved’, and Luca’s gratitude to be playing these songs for such a crowd was written all over his performance, as he left us with “these have all been very sad songs, but I’ve really enjoyed playing them”. We hope to see this lad back on Irish soil for a longer set real soon.

As Dermot and his band were welcomed by a roaring crowd to the opening chords of ‘All My Friends’, the entire venue were engaged in a passionate sing-song, short of 3 seconds in. And as the instrumentals dipped in the chorus, the ambience of the Olympia absolutely shone. It was already clear this was a gig not to be missed.

Treating fans to both the well-known numbers such as ‘Moments Passed’, ‘Couldn’t Tell’, and ‘An Evening I Will Not Forget’, it’s almost impossible to choose a highlight. But as we listened intensely to some brand new gems, there was no question that ‘Dancing Under Red Skies’ is the next hit in the making, with “nobody ever got my soul right like she could” ringing in the ears of many for hours after, we’re sure.

The performance as a whole was many things – a nod to the years Dermot spent honing his craft on the streets and intimate venues of Dublin, a mega salute to his intricate lyricism and unmatched songwriting abilities, but also an absolutely delicious taste of what’s to come next month when we see Dermot’s powerful vocals radiate the grounds of Malahide Castle for a support slot with Mumford & Sons.

We’ll be there, and we certainly can’t wait!