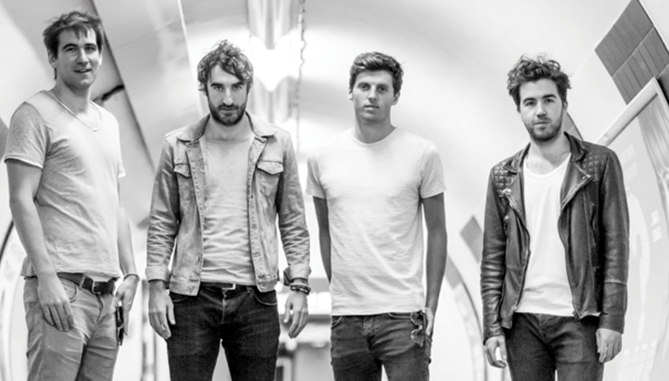 Inimitable passion, amazing stage presence, excellent sound live. These three factors make The Coronas one of the most must-see bands in Ireland.

In what can only be described as a wonderful feel-good moment, hometown heroes The Coronas return to Dublin to play a sold-out show in the 3Arena.

To see the smile on the band’s faces while the crowd roared their approval is something that would make nearly anyone shed a tear of joy for The Coronas. They well and truly deserve every single bit of success they’ve gotten so far – and tonight proved it.

The popular Dingle rock band Walking on Cars opened the show to a great reaction. These guys have gained a reputation for having great energy on the stage and sounding nearly flawless live. With a set list filled with brand new songs and fan favourites including ‘Two Stones’, ‘Hand in Hand’ and ‘I’ll Always Be With You’, it won’t be long before we see this group headlining their own 3Arena show.

Around 20 minutes after they left the stage, the lights went down and crowd erupted into a frenzy of excitement. The tense wait was drawn out for what felt like around 5 minutes – but the pay off was worth it. The instant energy radiating off the band was infectious as they blasted straight into their setlist.

The Coronas played a setlist that suited well to everyone. Die hard fans got their fix of older tunes including ‘Heroes Or Ghosts’, while newer fans or those less familiar with the band were treated to insanely good performances of songs from the newest album, ‘The Long Way’.

Tracks from ‘The Long Way’ seemed to sound a lot better live than the band’s older music, with tunes like ‘Just Like That’, ‘Get Loose’ and ‘All The Others’ played awesomely and effortlessly – but the old songs did ignite generally bigger crowd pops.

A stand out moment for the night was the performance of ‘Tell Me Again’. Before they played the beautiful song, lead guitarist Dave McPhillips explained it was about being away from family more than you expect to me, which got a huge applause from the crowd as they sympathized for the lads. It was a lovely moment as the band dedicated the song to their family and friends who had made it out to the show that night.

After leaving the stage to prepare for their encore performance, The Coronas returned to play some of their bigger hits – including the ever so popular ‘San Diego Song’. This was arguably the most popular song of the night, with the crowd belting out every lyric like their lives depended on it. It was such a good reaction, in fact, that the band did the chorus a few times extra.

How do you end a show that good without a cool surprise? The Coronas have you covered. After inviting Patrick Sheehy from Walking On Cars back on stage, they also brought out the quickly rising star Gavin James to participate in the final song. The Coronas, Patrick and Gavin performed an incredible rendition of Mic Christopher’s ‘Heyday’, while the crowd shouted the chorus back at them with conviction.

There is an inimitable passion The Coronas bring to every gig that sucks you in and captures your attention from start to finish. From Walking On Cars to The Coronas, this was an amazing night of music enjoyed by a sold-out crowd in Dublin.

We recently had the privilege of having The Coronas in to perform a Playedbare Session. Watch: