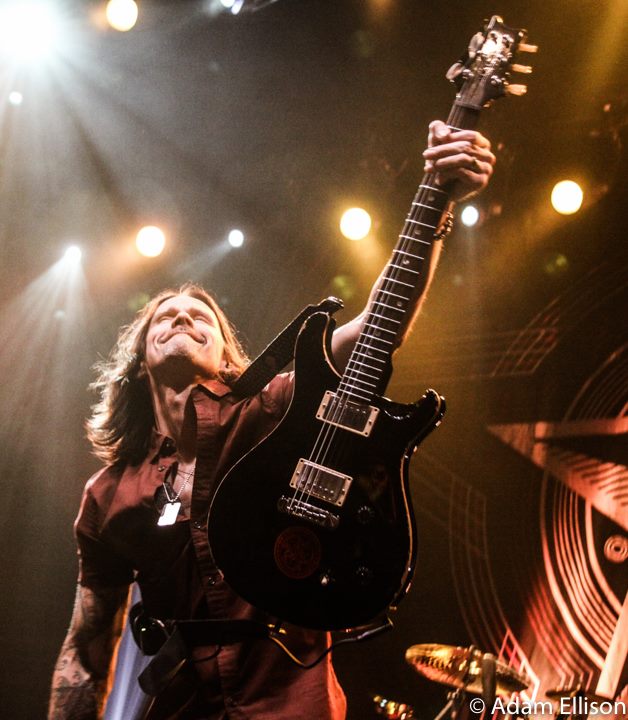 A special entrance to the Irish music scene by one of the worlds best rock bands. Alter Bridge brought the house down.

After 14 years, 5 albums and playing massive venues like Wembley, Alter Bridge kicked off their first ever Irish gig at The Olympia theatre, and it was loud.

Mark down the 20th of June 2018 in your calendar, because that will be the 1 year anniversary of Alter Bridge’s first ever Dublin gig. It’s that important. Alter Bridge have been one of the most musically talented bands in recent times. Front man Myles Kennedy’s diverse and unique vocals and blues guitar expertise combined with Mark Tremonti’s other worldly lead guitar skills, creates a unique sound that no other band can replicate, sprinkle on the songwriting prowess and you have a modern rock heavyweight.

The backdrop for this show is the historical Olympia Theatre in Dublin’s city centre, this beautiful venue has supplied the stage to rock legends such as the Foo Fighters, The Killers, R.E.M and the late David Bowie and Chris Cornell. On the day of the show, Alter Bridge put a picture on the venue up on their official Instagram, with the caption “Today’s venue is beautiful.” That it is.

The support of the night is Ohio band RED SUN RISING, a band that define their influences like “threads in a fabric,” which results in them not being able to tie themselves to a specific genre. RED SUN RISING live up to their self description, it’s hard to define what they are, their music is eerie and emotional and the bands musical talent is exceptional. The vocals of frontman Mike Priotich can only be described as super, he also showcases his guitar and bass skills during the show. The highlight of the set was the cover of Alanis Morisette ‘Uninvited’, a very cool, creepy version of the song. All and all, RED SUN RISING were impressive.

For their first ever Dublin set, Alter Bridge do not disappoint, the band approach the stage to thunderous cheers and applause. They open with a few songs from their new album (The Last Hero), including ‘The Writing on The Wall’ and ‘Farther Than the Sun’, followed by ‘Addicted To Pain’ from their fourth album “Fortress” and then a hit from their third album, ABIII’s ‘Ghosts Of Days Gone By’.

The standout moments of the night come one after the other in the centre of the set list, with the band playing ‘Waters Rising’ from Fortress, followed by the traditional Myles Kennedy acoustic of ‘Watch Over You’ from the album “Blackbird.” ‘Waters Rising’ features Tremonti taking the lead on vocals, showcasing his gritty and booming voice, the song is an example of the musical range Alter Bridge are capable of, with Mark being well capable to grab lead vocals by the throat, as well as Myles being more than capable to take the lead on guitar. ‘Watch Over You’ is always the defining moment of any Alter Bridge concert, the song lets you know that you are present, and showcases Myles Kennedy’s ability to hold an audience by himself, and sweep them with emotion, Myles will always be what makes Alter Bridge what they are, and he delivers that message with this song every time.

The band carry on their set with hits like ‘Isolation’, ‘Slip To The Void’ and ‘Blackbird’, before wrapping up their set with ‘Open Your Eyes’ and ‘Metalingus’, The band then give a special encore gift of ‘This Side Of Fate’ and ‘Show Me A Leader’, followed by an epic duelling of guitar solos between Myles and Mark, and then wrapping up with the ever famous ‘Rise Today’. The band leave the famous Olympia stage to a rapturous applause, cementing a date into their own history book.

Alter Bridge came to Dublin with an exceptionally loud bang, literally. The sound was in fact too loud for a small venue such as the Olympia, but with the band being used to playing stadiums like London’s Wembley arena, you can forgive their sound engineers for having the volume up too high. Besides, the people of Ireland have waited a long time to hear Alter Bridge play here, and by God, they definitely heard them.