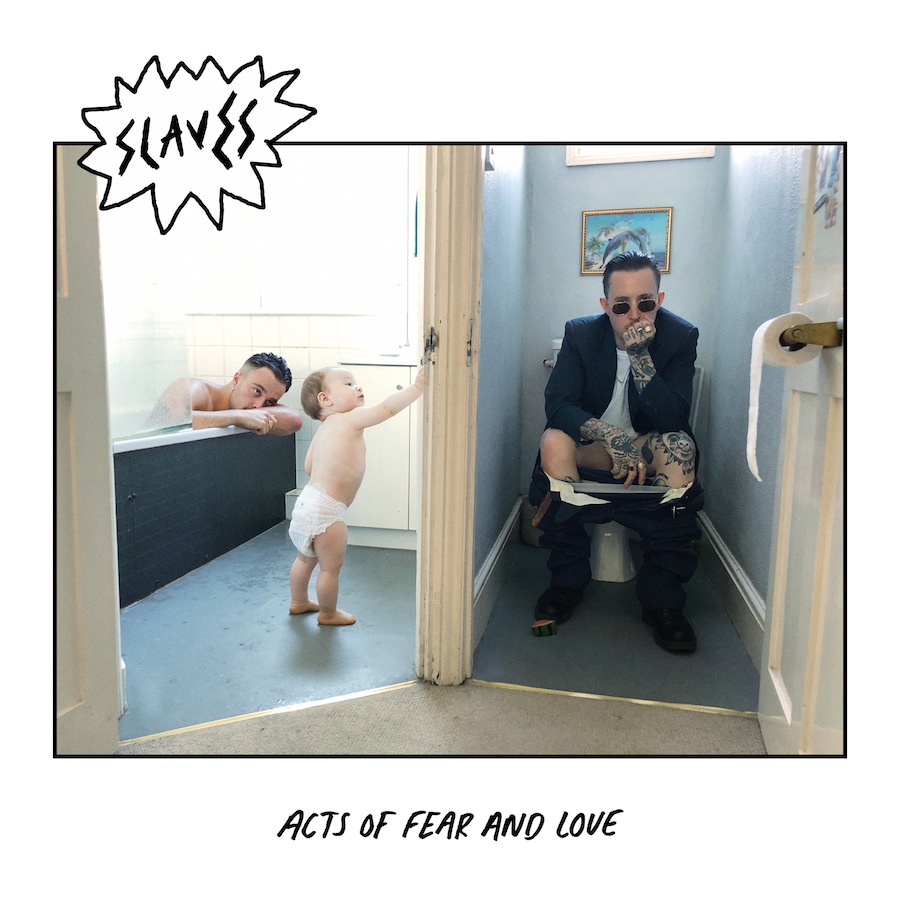 ‘Acts of Fear and Love’ is the latest record from Tunbridge Wells noise makers Slaves,  their third full release following their debut album ‘Are You Satisfied?’ in 2015 and 2016s follow up ‘Take Control’.

The first taste of new Slaves material was showcased in lead single ‘Cut and Run’, an enjoyable punk bop complete with its own accompanying dance,  a pop-punk Macarena, which is destined to be popular at the live shows. The song was a slight break away from Slaves usually speedy garage rock, and in the run-up to the release of ‘Acts of Fear and Love’ the band have reiterated that they have attempted to expand their sound on the album. Whilst that is true, there is still much here that fans of the duo’s high energy punk sound won’t be left feeling disappointed. For example, whilst ‘Cut and Run’ may be a poppier moment, with it’s infectious hook “he didn’t learn from the error of his ways/ his days didn’t count/ cos he was counting down his days”, it retains the duo’s anarchic spirit, as the hook is excellently contrasted by Laurie Vincent’s irregularly squealing guitar.

Opener ‘The Lives They Wished They Had’ is a classic Slaves track, a garage punk stomper with its tongue firmly in its cheek, as vocalist/drummer Isaac Holman lampoons aspirational Instagram attitudes  “Poolside-poses, but don’t fall in/You’ll remove the golden glow from your otherwise pasty skin”. Second single ‘Chokehold’ is also familiar Slaves territory, though, like many other tracks, the growing influence of Vincent’s backing vocals works to give the track more depth,  and whilst the dystopian hard rock of ‘Artificial Intelligence’ is not unlike similarly surreal Slaves tracks ‘Where’s Your Car Debbie?’ or ‘Feed The Mantaray’, musically it’s much heavier than much of what the group has produced in the past, with  mechanical drums and heavy guitars echoing an almost industrial landscape.

The more obvious moments of expansion and development are found on tracks such as ‘Daddy’, a sombre ballad that documents watching a Father go through a midlife crisis, complete with “new car”, “new girl, old enough to be his kid” all because “there’s things he wishes he did back when he was a kid”. ‘Photo Opportunity’ is another tender moment, where Holman confesses to feeling the pressures of having a public image “This is not a photo opportunity/ But if I say I’m sorry I have somewhere to be/ and I open myself up for scrutiny” and his findings that his fame and status can still result in disillusionment and unfulfillment “Now my pockets are full, but the forecast is grey/What shall we do today?”. Showcasing a loud quiet loud dynamic far removed from the usual spiky punk vibe Slaves usually convey works well, especially on the emphatic chorus where Holman’s vocal power is exceptionally impressive. The title track ‘Acts of Fear and Love’ is an arena-sized finale, complete with spoken word verses and an ear-bursting chorus that round the album off nicely.

However, whilst Slaves do step into new territory musically and lyrically, some tracks seem to lose impact due to either feeling slightly underwritten and incomplete, such as ‘Daddy’, which whilst containing a lot of emotional potential, loses poignancy due to the simplistic backing guitar and the songs short length. ‘Bugs’ features an excellent thrash metal riff, but falls short of a being a highlight, as it’s political lyrics “backpedal, backpedal, backpedal back!/ Too late, fuck you, we’re not ‘avin that!” “Another let-down generation/Fed inaccurate information” to me feel a little too surface level and uninspired to be considered a great track, such as the afore-mentioned ‘Photo Opportunity’ or ‘Magnolia’. The latter is initially a little steadily paced and straightforward, but it’s an earworm that grows on you, it’s catchy “it’s gotta be, gotta be, it’s gotta be perfect!” chorus stuck around in my ears for hours after I first heard it.

Initially ‘Acts of Fear and Love’ can come across as a little underwhelming, due to it speeding past at a mere 9 tracks in 30 minutes. However, after a number of listens, it’s clear that what Slaves have done is trimmed the fat and got rid of anything they felt was weak or unnecessary, and whilst not every choice on the album works for me, it’s clearly their most accomplished work yet and I feel it is a resounding success. Bring on album number 4!