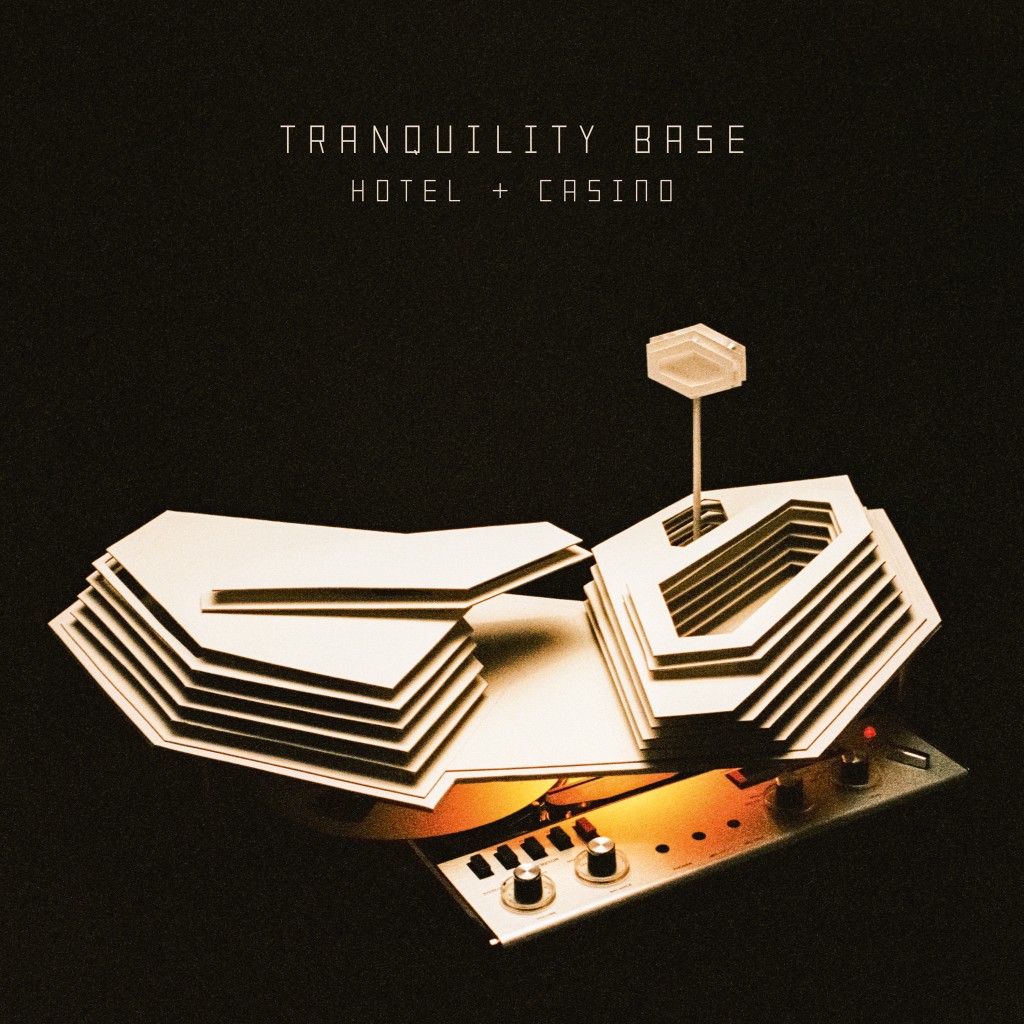 Arctic Monkeys test their audience as much as themselves on their long awaited sixth album, mixing sci-fi paranoia with space age self reflection over lounge lizard pop-rock

There was a feeling of “what next?” for Arctic Monkeys after their 2013 smash hit album ‘AM’, and to many fans surprise/horror, it has turned out that the bands next step is a piano centred lounge rock album, set in a fictional hotel on the moon.

The album caused pandemonium on social media the morning it was released (May 11th), with fans split firmly down the middle. Some fans embraced the ponderous pace and abstract lyrical content immediately, whilst some were heartbroken that after years of patient waiting, they had been gifted frontman Alex Turner doing his best Bowie/Cohen/Gainsbourg, rambling on about dancing in his underpants and kissing under the moons side-boob, over the style of music usually found playing in elevators.

Both arguments are understandable, though I fall firmly into the former camp, and I believe that ‘Tranquillity Base Hotel + Casino’ is an album that shines brightest through multiple, full (no skipping!) listens. How much of this record was originally envisioned as a solo project for Turner is unclear, and it’s fair to say that if that was the case, then the album would likely be more immediately digestible, instead of the head-scratcher it appears as on first listen.
Opening with some jazzy drums and piano, on ‘Star Treatment’ a woozy Turner confesses “I just wanted to be one of The Strokes/now look at the mess you’ve made me make”, a line that catches you off guard in its blunt and honest delivery, especially in comparison to the opaque and occasionally rambling nature of many of the lyrics on the album. It’s pleasing to hear on this track, that whilst he may be signing about wildly different topics than previously, Turner hasn’t lost his sense of humour, and smiles are raised at the threat of calling the ‘Martini Police’ and the serious interrogation of “What do you mean you’ve never seen Blade Runner?”.

‘Tranquillity Base Hotel + Casino”, is one of a handful of tracks where the titular, physical hotel is discussed directly and here Turner describes some of the residents “Jesus in the day spa”, “Mama got her hair done” before taking the role of ‘Mark’ from reception on the chorus, projected through an impressive and intimate falsetto. Another track that does this is the excellent ‘Four Out Five’, a song that works as an easier transition from Arctic Monkeys older material, with a prominent groove from Nick O’Malley on bass and a notable Bowie influence on the vocal, it descends into a hypnotic finale, akin to The Eagles ‘Hotel California’ in its desperate and perturbing plea to “Take it easy for a little while/come and stay with us”.
The music may initially seem somewhat lethargic, especially in comparison to Arctic Monkeys earlier work, but there are some interesting and rich musical ideas being presented on ‘Tranquillity Base Hotel + Casino’. ‘One Point Perspective’ features some jolting staccato stabs on the piano and a bouncing bassline, ‘Golden Trunks’ sounds not unlike a vintage horror movie soundtrack through a thick combination of buzzing guitars and dramatic 70s style organs, and the heaviest track on the album ‘She Looks Like Fun’ gives drummer Matt Helders, who is understandably understated on much of the album, a few beastly moments behind the kit.
However, the combination of Turner’s cryptic wordplay and the bands slower pace works to varying degrees, and some tracks such as ‘The World’s First Ever Monster Truck Front Flip” end up being not nearly as adventurous as the title would suggest, and the track is only saved from its lyrical rambling by the lovely vocal melody Turner produces on the line “I’m just a bad girl trying to be good/I’ve got a laser guiding my love that I cannot adjust”, which criminally appears only once on the track. ‘Science Fiction’ is also a weaker moment, however like the former track it is not completely without merit, notably, the self-deprecating wink of “I’ve a feeling that the whole thing may well just up too clever for its own good/the way some Science Fiction does”.

Turner is stepping into previously untouched lyrical territory on much of ‘Tranquillity Base Hotel + Casino’. His voyage into the intergalactic is expanded upon in opener ‘Star Treatment’ and the excellent ‘American Sports’, whilst on ‘She Looks Like Fun’ and ‘Batphone’, Turner voices his commentary on the pitfalls of our techno-obsessed culture. On the former he points his finger to the banality of scrolling through social media, belting out potential hashtags such as “Bukowski!” “Good Morning!” and “Cheeseburger!”. He eerily warns the listener to “dance like somebody’s watching/ because they are” before succumbing to the widespread physical disconnection through the realisation “I need to spend less time stood around in bars/waffling on to strangers all about martial arts.” His technophobia is elaborated on further on the latter, where he recalls the time he “got sucked into a hole through a handheld device” before referring to the 60s rotary dial ‘Batphone’ he now opts for.

The album concludes on a bittersweet note with the touching piano ballad ‘The Ultracheese’. The song finds Turner looking back over the transitions of his career “Still got pictures of friends on the wall/ I suppose we aren’t really friends anymore”. The song swells with dramatic chords as Turners raises in volume and vulnerability, finishing with the heart-breaking “I’ve done some things that I shouldn’t have done, But I haven’t stopped loving you once” and one final falsetto cry, which leads to a line or a melody that never arrives, a poignant if somewhat incomplete finale.

Like on many of the preceding tracks, Turner does an excellent job of pulling together the confessional and the conceptual, the sci-fi element still remains on ‘The Ultracheese’, but it never feels too far away as so to fully disassociate. The very real sentiments of isolation and disconnection are dealt with superbly on ‘Tranquillity Base Hotel + Casino’, the band project these thoughts through the vivid imagery, opaque lyrics and atmospheric instrumentals, and whilst not a perfect record, it’s hard not to at least admire Arctic Monkeys bravery in striving towards yet another new musical avenue.