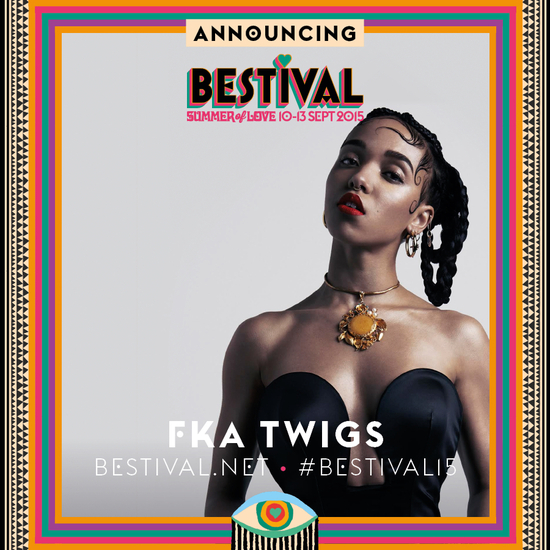 Bestival organiser, Rob da Bank comments on FKA Twigs: “I picked up a white label record by an artist called twigs in 2012 and started playing it on my Radio 1 show, with no idea who or what was creating this fantastic sound… Three years on and it’s exciting to see FKA twigs breaking through, still forging such a leftfield sound and winning! We can’t wait to welcome her to Bestival’s Summer of Love 2015… and I’ve still got that white label!”

The consummate polymath, FKA twigs has recently announced her video-directorial debut for Glass & Patron, the lead track taken from her forthcoming EP, which moves the story on from where her Mercury Prize nominated LP1 left off, exploring her stunningly unique brand of slo-mo R&B and sylphlike vocals. With a truly astonishing live presence, her Bestival show is a guaranteed must-see even.
Digital love: www.Bestival.net / Facebook /  Twitter / Instagram / Tumblr