Interview: Mark Tremonti of Alter Bridge – “The only thing we try to do is outdo what we’ve done in the past.” 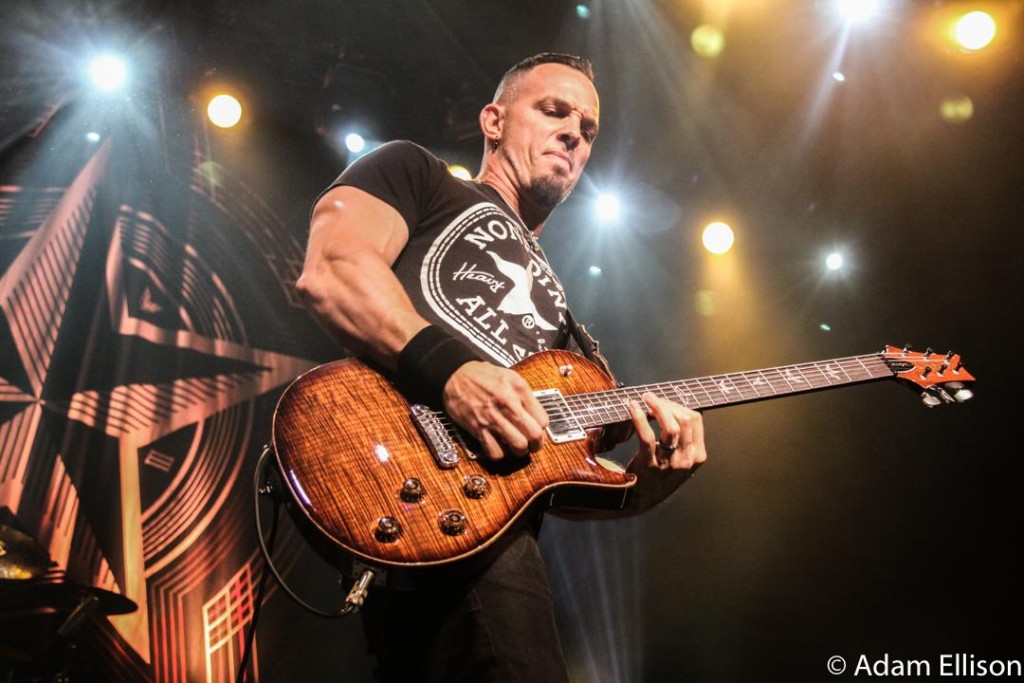 With 13 years of experience, 6 albums under their belt and an impressive number of tours undertaken, Alter Bridge have finally made their way to Ireland’s shores.

The fans have wanted it for a long time, and earlier this week Alter Bridge played a sold out show in the Olympia Theatre in Dublin. We had the chance to speak to Mark Tremonti right before this momentous show took place.

By now, you’ve toured the UK quite extensively. Tonight, though, is your first ever Irish show. Are you excited to introduce yourself to your Irish fans?

Yeah! I got to come to Ireland last year with my solo band and it was awesome. Everyone expressed how much they wanted to see Alter Bridge here, so it’s well overdue.

You’ve also been doing a lot of festivals each year since your formation, are there any UK or Irish bands you’ve been keeping an eye on?

I mean, from back in the day, Thin Lizzy! Or U2. Sometimes with modern bands I don’t know who’s from where, you know? Until you meet them in person or hear their accent you have no idea if they’re American or English, you know, so it’s hard for me to say.

What about American bands?

Yeah, I mean, they’re not up and coming, but current bands like Gojira are one of the best bands to watch. We got to have them on tour with us last year. Opeth – I love! Again, not up and coming bands but these guys have like 10 albums! Mastodon- it’s fun to see them experiment with what they’re doing.

You’ve recently released a new album, The Last Hero, would you say that your time away with your solo band, Tremonti, and Myles’ time away with Slash has kind of inspired the new albums in any way?

Yeah, I think after ABIII is when we started releasing after every other year. It really helps to go do something else and have a fresh look at Alter Bridge again. I couldn’t imagine just being in one band for life, it’d be hard to keep reinventing ourselves, which we try to do as much as we can. I know when I go and sing in Tremonti and experience all the new things with that band, when I come back I feel like a more rounded and experienced player, so it definitely helps.

How was the feedback for The Last Hero? Were you happy with it?

Awesome! It seems like every record our fanbase likes more and more. That’s really the only thing we try to do, is outdo what we’ve done in the past.

Speaking of new albums, you have a live and rarities album coming up in September, could you tell us about that?

Every time we hit a new benchmark in our career we like to put something together around it, like when we played Wembley we shot the DVD. This time we played the O2 and we wanted to capture that moment, so we did live at the O2 as a live CD. Then, to add to the allure of it, we have some B-Sides that we’ve talked about for years, to release them, but we never have. We thought it’d be the perfect package. They’re songs I like just as much as any of the other tracks on the records, they just never got put out, so I’m excited for people to hear them, ‘Solace’ and ‘Cruel Sun’ especially, they’re a few songs that I really liked from our first album. I don’t know how many other B-Sides we have on there but I’ve always wanted to put them all together on a CD.

What sets that O2 release apart from the Wembley and Amsterdam recordings?

Well, new songs, obviously – that’s the biggest thing, just new material, new atmosphere. We tried to capture that night. We taped two or three shows just to make sure that if some string broke on a song we could fix it with the next night! But O2 was what we wanted to capture. The biggest difference is just the few years gone by: New songs, new crowd.

Yeah, it’s gonna be full on rock. We’re doing more of a setlist that has atmospheric songs that would fit better with an orchestra. Like ‘Words Darker Than Their Wings’ is a song that we’ve never played before, it’s one of our fan favourites and one of my top 3 or 4 Alter Bridge songs we’ve ever done. We’ve never played it live – we used to soundcheck it a lot, but we never did it. It was always too important of a song and then years go by and you never play it because it’s too important to you but this is the perfect atmosphere to play it. So there’s gonna be songs like that, we’re gonna pull Fortress back out. Just the big, drawn out, more epic songs that an orchestral movement would help.

Are you writing any new songs for those 2 shows?

No, no. Right now I’m writing my next Tremonti record and Myles is writing his solo record. I want to go in the studio in January, I’m 6 or 7 songs deep and just trying to go through all my ideas and pick the favourite ones, to be over prepared when I get ready to record.

What can you tell us about the orchestra itself?

They did Bring Me To The Horizon, they’ve played with a few bands, and I guess Royal Albert – you have to approve through them who can go in there and perform. There’s only 2 or 3 groups that could do it and this is one. They’ve done the rock thing in the past, which I haven’t seen but they said it was amazing and as they put together the arrangements they’ll send them to us and our manager will overlay the music with the symphonies. He has a MIDI program where he has to plug in all the stuff so we can hear what it’s gonna sound like, and it’s gonna be great. I can’t wait!

Alter Bridge are returning to Dublin in October and tickets go on sale on Friday morning, don’t miss out!

Also keep an eye out for the upcoming Live At The O2 + Rarities live album which drops September 8th.