Interview: KOLARS – “One thing I’ve realised is that people want to like you” 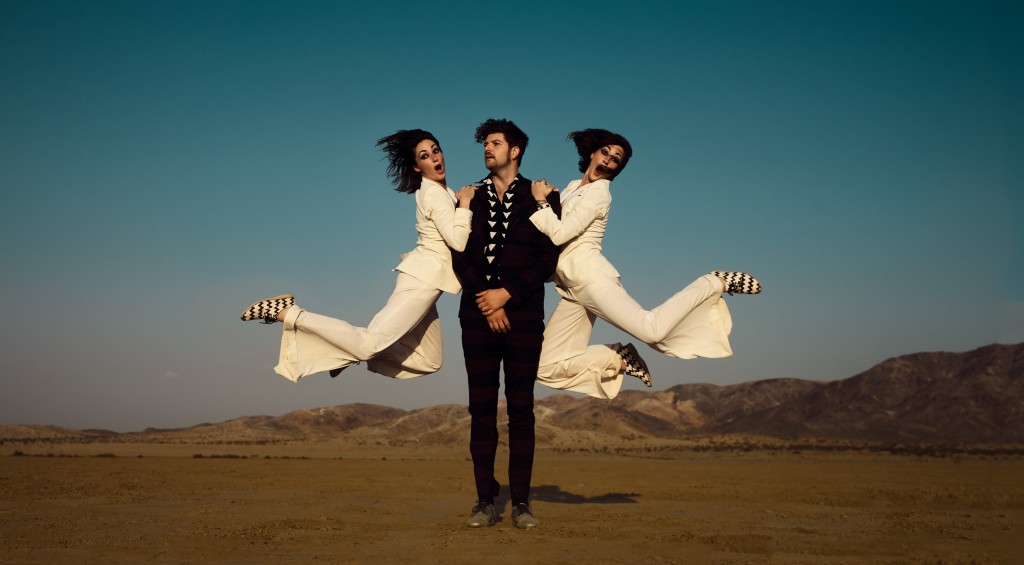 Having played Dublin’s Bello Bar before heading for a Kilkenny show and across the pond to the UK, we caught up with US duo, KOLARS over a coffee in Portobello.

Tell us a little bit about last night, your first ever Dublin show.

Rob: Yeah, it was our first ever Ireland show, so we were a little nervous I think. We’ve been to Ireland before, but first time performing in a country, you want to make a good impression, you want to have fun.

Rob: It started out with people listening very attentively, comfy in their seats, and as the night progressed, there were a couple of people dancing and standing up. By the end of it it turned into a big party; people up the front, cheering, singing along, we did this crowd-interactive part where we sing with the crowd and clap together.

Lauren: I love that there was this one couple dancing the whole time together down the back, in different styles too.

[…] And then yeah, Kilkenny tonight; if people can brave the storm! I think Saturday night in Kilkenny, storm or no storm, gonna be a great night.

Have you ever been to Kilkenny to visit?

Rob: Yeah, our family live there, so that’s partly why we’re playing, to bring the gig to them.

Lauren: We’re getting a lot of Kilkenny support! We were in the paper with the headline ‘Kolars Come to Kilkenny!’.

[Meanwhile, the band’s press agent comes over with yet another local Kilkenny feature – headline: “things are hotting up in the Kilkenny music scene!”]

Lauren: This could be our biggest gig yet! There’s this real camaraderie that’s similar to in Boston.

Rob: We were on the radio and I was saying that Lauren tap dances and drums, and if you go back, the history of what Lauren does is Irish set dancing.

Walk us through how you guys work on the live set as a duo? Have you considered a full band or do you keep it quite minimalistic?

Rob: Well you were talking about how St Vincent kind of loops and uses some tracks in what she does, and we do a little bit of that. So we treat this project as a live rock ‘n’ roll duo meets a sort of modern dance approach. Not like EMD Dance, but has a dance kind of modern approach.

Lauren: Half the set is like more of a rockabilly, stripped down vibe, electric guitars and that, and then we bring in some backing tracks that we’ve pre-recorded ourselves, so I’ll play with me, and he’ll play with him and it fills out the sound so we can create a disco, full gig. ‘Cause you miss the bass after a while! Because that’s what you dance to.

Yeah, I play a bit of bass and a lot of times it can be surprisingly overlooked…

Rob: The bass is crucial!

Lauren: Bass is the best, it’s kind of my favourite instrument! I play a tom drum that kind of supplements it a little bit because it gets a bit of that bass but it’s not the same, there’s nothing like a great bass riff.

So, when you’re writing music, do you keep the live set in mind or is it just a case of what sounds best on record?

Rob: That’s a great question! You know, it’s a little bit of both, I think there’s definitely songs on the album and that will continue to be on albums where we think about “how will this translate live in terms of the rhythm or even hand claps or a chorus that feels anthemic so people can sing along”, so we definitely do have that side. But then there are songs that you just want to honour the song as an artistic thing, whether it translates live or not, so it goes both ways.

Lauren: Yeah, but rhythmically, I live in a world of like “can I physically do this?!”, ’cause I also want to create a song that I can do live, I don’t want it to be false in that way, so it has to be something where it’s like “ok, whatever we create in here, I can do”. ‘Cause I do it with my legs and my arms going at the same time, but when we record, I do it separate.

It’s funny you say that, ’cause I saw Newton Faulkner last week and he played a new song which he actually laughed about beforehand saying “damn, why did I make this song so hard for myself”!

Lauren: That’s how I feel sometimes too!

Rob: It’s true, you get carried away sometimes in the studio and you just go down that artistic path and you forget!

When I was listening to the album, one song that made me regret missing the gig last night was ‘Dizzy’, ’cause that just sounds like it would be so good live…

Rob: Yeah, that was one of the ones that got people up and going – it was a nice transition in the set.

Lauren: There’s something very happy about that song. Even though the lyrics aren’t necessarily what they seem.

Rob: Yeah well, we definitely love pop music and melodic songs, but we also infuse social commentary and political ideas into a lot of the songs and it’s sometimes layered, so on the surface it comes off as a straight forward pop or rock song, but there’s sub-context to it. That one has a bit of that; commenting on what we’re going through with our liberties and questioning a sense of reality and truth with what the media project versus alternative ideas.

Is the writing process a very structured thing like music first, then lyrics, or is it a very natural progression?

Rob: I think it varies from song to song, but there are some songs that come quite quickly. I used to write more where the lyrics came first, but now it feels more like there’s almost an emotion that comes first, like the chord progression and the feel of the song, and then the lyrics almost find themselves based on the mood. So, it starts as an energy and then forms itself around that.

And finally, in Ireland for instance, one way people really build up confidence in performance is through busking – how did you grow into the live performance side of things yourselves?

Lauren: You have great questions! I haven’t even really thought about that. I feel like we do need to do more busking. I studied a lot of performance art in school and we did a lot of that performance stuff and I think that really helps you become a great performer. It toughens you up, it teaches you how to engage with people who don’t know who you are and maybe aren’t interested at first.

You have to fight for it, that’s the thing!

Rob: That is key! That’s where you really learn. I used to busk in New York, in the subways when I was younger, and that is exactly it – it’s that feeling of playing in front of strangers, winning them over, having to make that initial connection. Because it’s quite easy to play in a theatre of 1000 people who are committed already. I’m always most impressed by a performer who’s playing in front of nobody they know, no fans, and can conjure something amazing. And I guess that’s what we’ve been going through a lot because we’re still a band that’s on the rise and breaking, so a lot of shows we play, even the ones we headline like last night, it’s like people are still like “let’s see about this”.

Lauren: I kind of love that challenge though! And not like I think I’m gonna win them over, but I push myself.

Rob: Yeah like by the end of last night it was really wonderful to see that transition and feel like the wall had been pulled down.

Rob: It’s different busking though, because people aren’t at a concert. That’s the most challenging way of performing!

Thanks very much for your time, guys.

Thank you so much, appreciate it.

KOLARS go on to play Amsterdam, Cologne, Munich and more.