Interview: Jimmy Eat World – “We don’t spend too much time worrying about what the critics say…” 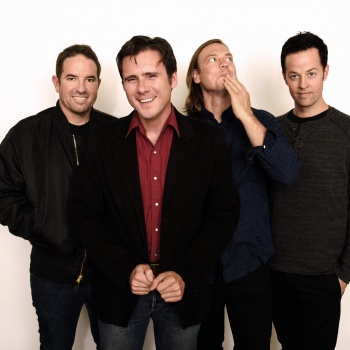 Coming hot off the release of their latest album, Integrity Blues, Jimmy Eat World have embarked on a tour of Europe and the UK, before they head back home to America for further tour dates.

We had the opportunity to sit down with Tom Linton and Zach Lind ahead of their Dublin show in the Olympia Theatre. Mid-way through the interview we were joined by an unscheduled guest, so read on!

You’re set to play the Olympia Theatre later tonight in Dublin. You were last here in 2013, are you excited to see your Irish fans again?

What can we expect from the setlist tonight, or indeed the tour as a whole? Are there any surprises?

Zach: Yeah, we try to be conscious of, like, what we played last time. We try not to, you know, be too repetitive with the setlist. The one thing we’ve been doing lately is we’ve been playing about 5 or 6 new songs from the album. That’s probably the most songs from a new album we’ve been playing for a long time, so just with that it’s definitely a new vibe. I mean, there’s maybe a few surprises, but if someone goes online on maybe setlist.fm – it’s not gonna be all that different from the last few shows we’ve done! But there will be a few little things here and there…

You mentioned the new songs there – you released your new album, Integrity Blues, two weeks ago. How has the reaction been from critics and fans?

Zach: I think it’s been really positive! We don’t spend too much time worrying about what the critics say, but the fans definitely seem to be expressing positive feelings about it, you know, and that’s always something that makes us feel good that the people who are supporting us like the new music.

Tom: When we play the songs live we’re getting a good reaction. I mean, people are still showing up the show!

How did the writing process all come about? Did it differ at all from your previous work?

Zach: Yeah, I think so. Usually the way we’ve done our last several albums is we’ll have a fairly prolonged writing process where we develop demo versions of all the songs that are really fleshed out and a lot of the creative choices have already been made, we just have to execute it. With Integrity Blues, the writing process was much shorter. We didn’t give ourselves a lot of time to iron out everything, so in the studio we were making a lot of decisions that were spur of the moment – a lot more than we have in the past. It made it a little bit more of an anxious process, but I think for this particular record it was a really good way to do it.

At this point in the interview, Jimmy Eat World’s bassist, Rick Burch, entered the room. After exchanging pleasantries, he pulled up a chair and joined in.

You’re spending the majority of November in the UK and Europe, are their any rising bands around these parts that you’ve been keeping an eye on? Any new music in particular?

Zach: Well, we’re doing a few shows in December in New York, and we found this band Prawn, who will be opening up the shows for us.

Similar music to you guys?

Zach: Yeah, I think so, they’re definitely in the same ball park.

Tom: I like the new Autolux record… but they’ve been around for a while!

Zach: There’s so many bands, it’s so hard to keep track of!

You’ve come a long way since the band was formed, I think it’s fair to say at this stage it’s gone beyond who influenced you guys and more about who you’re now influencing. How does it feel to know that you’re now at that status where you’re influencing the next generation of rock bands?

Zach: Whenever we hear that, it’s always flattering. Anytime anyone appreciates what you’re doing, it’s flattering. But, it’s not really something we dwell on, you know? I think if you sit there and think about how you’re potentially influencing people it’s a little…

Zach: [Laughs] Awkward. It’s a little egotistical and self-serving. Just the fact we have people coming out to the shows, the fact that they’re interested in us to any degree, if that’s influencing them to make music or something then that’s the highest praise. It means a lot.

Tomorrow night is the presidential election in America, and you’ve just released a song, ‘My Enemy’, which more or less trashes Donald Trump, if that’s fair to say…

Zach: Yeah, I mean the song wasn’t written about Trump in particular. The song was written about the compilation was taught up or put together. We were asked if we wanted to be a part of it, and in the end when you see the political climate in the US and what’s happening with the Trump campaign, it got to the level where you know, it’s like what what did you to counter that negativity? If we didn’t do anything it’d be a little bit of a disappointment. For us, it was an opportunity to contribute to what we felt was a worthwhile effort to say it in an artistic way, while giving a free song to our fans, about how we’re opposed to it in general.

Going into the election, have any of you got any thoughts about it? Any guesses on which way it could go?

Zach: I think Trump’s gonna lose. I think the odds are he’ll lose but, you know, people have to vote. The way it looks now, in terms of a lot of the early voting, huge amounts of Hispanic voters are turning out. 25% of Hispanic voters have never voted before, so that’s a really bad sign for Trump.

Rick: Exactly what he said!

You’ve announced a handful of shows for 2017 already. Are there any further plans in the works? Maybe another leg of the tour, or perhaps getting back into the studio?

Rick: Yeah, we’re definitely going to be touring around the world a couple of times with Integrity Blues. We’re really excited to get out and share that new music that we’ve worked hard on and we’re really proud of it. It’s great to be able to play a song and get an immediate reaction, it’s a lot of fun.

Thank you guys so much for your time.

Zach: Thanks so much for coming down!

Have a listen to Jimmy Eat World’s lead single from Integrity Blues, ‘Sure and Certain’ below!