Interview: Bleached – “Stop trying to identify my music with my gender” 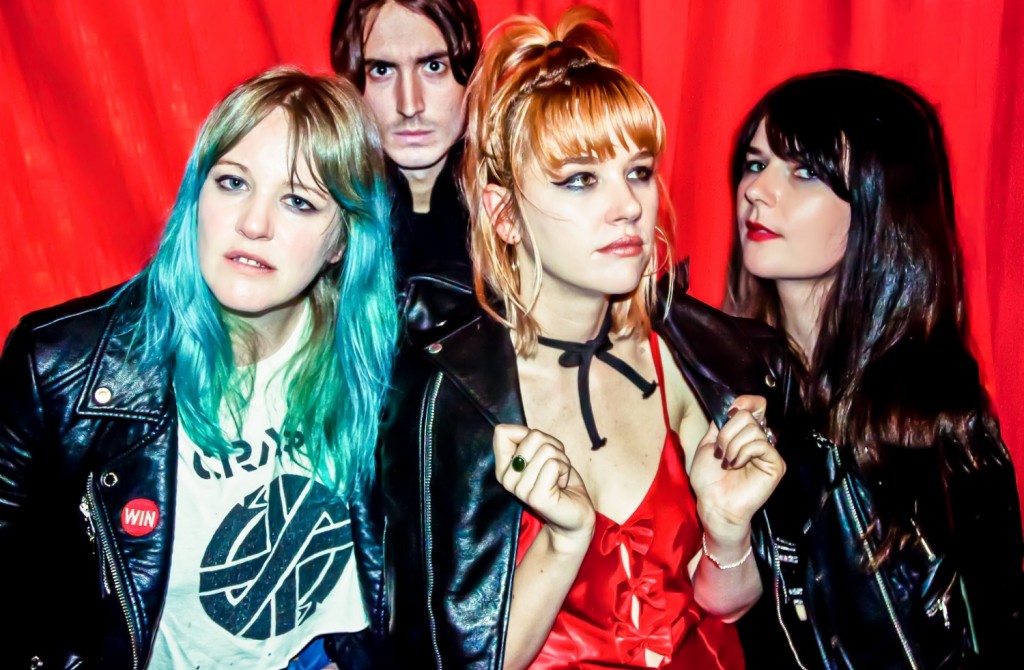 Currently touring Europe on the hugely hyped ‘After Laughter’ Tour One with Paramore, Bleached kicked things off with a bang in Dublin’s Olympia Theatre last week.

With a feisty energy and a stage presence that really got the Paramore crowd in gear, they certainly fill the big boots for this tour.

Talk to us a little bit firstly just about the Paramore tour that’s all kicking off tomorrow – it must be really exciting?

Jessica: Yeah, it is. We were coming to Europe quite often around this time last year…

Jennifer: ‘Cause we had put out a record, called ‘Welcome the Worms’, we put it out on April 1st, so we were coming to Europe then. We came to the UK twice then. But yeah, we haven’t been back since then and now we’re doing this tour with Paramore, which is SO awesome! The venues are crazy – we’ve never played this size before.

How did the support slot actually come about?

Jennifer: Well it all started with, I made this zine called ‘Can You Deal’ and I asked Hayley [Williams] to be a part of it. And so, she was super stoked about it because the zine was just about women in bands always being asked what it’s like to be a girl in a band, when like, women have been playing music for so long, stop trying to identify my music with my gender, you know? Because I want to be seen as a musician and not like “oh, girl playing a guitar”. And I think a lot of times writers like to turn it into this novelty. So

So yeah I asked her if she wanted to be in my zine, and she was super stoked, contributed to it and wrote about her experiences and then from there we were just talking about touring together one day. So, she asked us to tour America with them, but at that point we had already promised this band, Against Me, that we’d go on tour with them, which was 8 weeks long. So then they asked if we’d do Europe, and we were like YES!

That probably suits you even better as well because I guess you’re already relatively established in the US? Whereas in Europe now, this is such an opportunity to get out to a whole new base of people…

Jessica: Yeah, and we would way rather be big in Europe than in the US! Everything is so much cooler here, it’s cleaner, the food is better, hospitality is great!

That’s so crazy to hear because for bands here a lot of time, it’s the total opposite!

Jennifer: I guess you want what you can’t have!

How do you guys find the pressure with supporting someone as opposed to playing your own headline shows?

Jennifer: Yeah it’s super different! We always talk about this because when you’re doing your headline show, the crowd is there for you, but when you’re doing it as a support act, you have to prove yourself. We just did a support tour with a punk band, The Damned, and I think that was actually very good experience because it was sort of like bootcamp where it forced us to sort of hone in on our instruments plus perform well. So I’m glad we did that before this tour, because these rooms are a whole different level.

But yeah definitely, you’re playing for a bunch of people who have never seen you before, or if they have, they’ve looked you up because they saw you were the support band. And then there’s maybe just a few people who are there for just you and you can see them in the audience!

In terms of the set list for support gigs like these ones coming up, obviously you said it’s like going out and proving yourself, so do you base the set list on the reaction at previous gigs or how does it work?

Jessica: Yeah, I feel like the thought process for the set list is a major thing for us!

Jennifer: Yeah, and it depends who we’re opening for. So, there was a three song question, like which song do we play out of these three, and we were like “ok, which song would a Paramore crowd like the most?”. Because there were definitely some songs on The Damned tour set list that we decided to not do depending on that!

That’s cool, because I was doing a bit of Facebook lurking before I met you, and I saw that you guys have a few of your own shows slotted in between these Paramore dates – so, will the set list be totally different for those shows?

Jennifer: Well, it will be really similar but that’s when we throw a Nirvana or a Misfits cover in! And we do a few songs that we’ve been practising but that we’re not doing on the Paramore tour.

Jessica: Yeah, because we have a 45 minute set for Paramore but I think we’re keeping it to 40 minutes.

You mentioned the album that you released last year – is there any plan to follow up with another in the near future?

Jennifer: We did do a 4 track EP that we put out this year in April, and that’s got the track on it ‘Can You Deal’ which goes with the zine.

And when it comes to writing – do you sit down and say “lets write an album or an EP” or is it just a continuous writing journey and when there’s enough for an album you construct it all together?

Jennifer: It kind of goes both ways, like when we got home from The Damned tour, we were supposed to take three months to write and record a record, and then we ended up doing the Paramore tour so when we got home we only had a month and we had to use that time to practise. So now when we go home after this we’ll try nail down a writing schedule. It kind of happens different ways too, ’cause a lot of times I’ll be at home and I’ll just write a song on acoustic guitar, and then I’ll bring it to the band and we’ll do it all as a live song. And sometimes we’ll be in the room together and just start to jam together. And then sometimes we’ll just take a really old song, cause there are some really old demos that I love that just never got recorded so we’ll go back to those and see how we can change them around.

That’s so cool, because you can definitely go back to something that’s ridiculously old and have a totally different perspective on it. Like I know even personally, I have friends who write music and I’ll sometimes find some of their old demos on my laptop and just send them back over to them because maybe there’s some inspiration in it now that there wasn’t at the time, you know?

Jennifer: We need a friend like that back home to keep our demos!

Jessica: That’s another thing too – if you still like the song after all those years, it’s obviously a good song.

On a support tour like this, what kind of tips and tricks do you guys try to pick up from the headline act, if any?

Jennifer: I feel like we definitely pick up things. I don’t know exactly what they’ll be on this tour, but I think it will just be a case of seeing their confidence might make us feel a bit more confident.

Jessica: I think there’s a balance you find where you know what you’re doing and who you are on stage but then you also keep an open mind too and try find new things and learn things. And I think when I find myself being more open, it boosts confidence a little bit because I’m able to admit to myself that like, I don’t have it all down right now, so I’m able to pick up little things and see what they’re doing, because they’re obviously doing it right!

Jennifer: But then I think we have gone on tours with bands where it’s very clear that our lifestyles are different and so then you don’t really pick up anything.

Well I think in terms of what you’re saying about seeing their confidence – tomorrow will be very very interesting to see a band who have taken such a long time out, and I know for a fact they [Paramore] will still come out and be just as on it as they ever were. I think tomorrow will be a special one.

Jennifer: That’s really cool! And I think it will be special because we’ll be playing first and they’ll have never seen us before and then we’ve never seen them live before, so it will be a first for all of us!

Probably the perfect place to wrap this up, girls. Thank you so so much for taking the time out to chat.