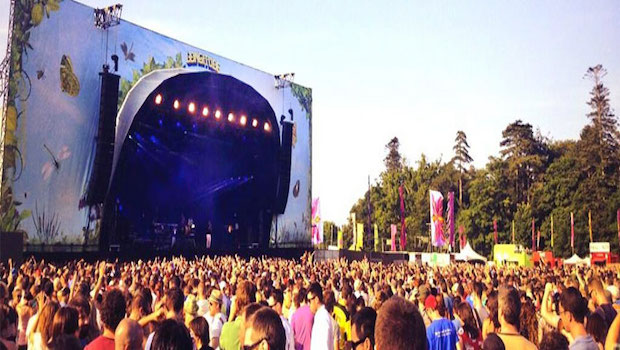 Contrary to the weather warnings and storm anticipations, the sun was shining across Dublin for what was surely one of the hottest weekends of the Summer. Longitude 2014 was getting off on the right foot!

We spent the three days catching some outstanding performances across the four stages, and thought we’d bring you some highlights from the Friday, Saturday and Sunday…

Following his well received début album ‘Wanted On Voyage’, George Ezra took his punchy blend of guitar driven pop/indie to Marlay Park on the first day of Longitude. Sparking the set with ‘Blame It On Me’ to make his entrance, songs such as ‘Cassy O’ and a solo run at ‘Leaving It Up To You’ also went down a treat. Finishing his set on the hit singles ‘Budapest’ and ‘Did You See The Rain’ the crowd were really digging Ezra’s worthy main stage appearance.

Our second highlight of the Friday is never less than impressive, Bastille. Now masters of the live scene, Bastille came out second last on the main stage, just before headliner, Ben Howard. Opening on debut album title track ‘Bad Blood’, their set also included tracks such as ‘The Silence’, ‘Icarus’, ‘These Streets’ and crowd favourite ‘Flaws’, for which Dan brought himself into the crowd. Closing the set on both their rendition of ‘Of The Night’, a pure festival anthem, and their breakthrough hit ‘Pompeii’, Bastille left the Longitude crowd more than satisfied.

Californian pop rock sisters, Haim took to the main stage on the Saturday and stole the attention of so many unfamiliar ears. Belting out fan favourites from ‘Days Are Gone’ such as ‘The Wire’, ‘Falling’ and ‘Don’t Save Me’, the trio are poster girls for festival stage presence. Using the stage to animate their set and the crowd alike, Haim interacted with the crowd whilst pulling off a musically impeccable performance.

Manchester’s Indie Pop stormers, The 1975 were one of the most anticipated acts of the festival, and they certainly pulled it off. Strutting onto the stage, bottle of red wine in hand, Matt Healy is undisputedly confirmed the ultimate frontman heartthrob in the crowd. With his confident stage presence seemingly a blend of drink and substance-induced, the performance doesn’t suffer, and a trip down to the front barrier met with some brief selfies was a nice touch. Tracks such as ‘The City’, which the band opened on keeping in tune with the album, and ‘Settle Down’ got impressive reactions, but the real crowd pleasers were ‘Girls’, ‘Chocolate’, the more mellow ‘Robbers’ and of course, the closing ‘Sex’.

Broods, a sibling pop duo hailing from New Zealand, really lit up the Whelan’s 25 stage for the last day of the festival. Drawing a massive crowd in, they played songs from their self titled EP, in preparation for their début album out in August. Their sound echoed the perfect festival vibe, and in the cosy tent that was the Whelan’s stage, they definitely impressed. Lead vocalist Georgia Nott propelled her unique voice across the stage along with some quirky dances, while brother Caleb delivered punchy synths and backing vocals. Ending on clear fan favourite ‘Bridges’, their set was well-received from beginning to end.

Taking to the main stage just before headliner, Massive Attack was folk pop singer/songwriter, James Vincent McMorrow. Arguably too laid back and mellow for a late festival act, James really hit it off with the big main stage crowd. Performing a nice mix of songs from both his first and second album, his stage presence was humble and friendly and definitely pushed his general chit-chat between songs to a success. Tracks such as ‘If I Had A Boat’ and ‘We Don’t Eat’ from ‘Early In The Morning’ alongside newer tracks ‘Gold’, ‘Cavalier’ and ‘Red Dust’ from the second album ‘Post Tropical’ went down a treat and encouraged a response from the quite relaxed and chilled crowd, for the first time over the entire weekend!