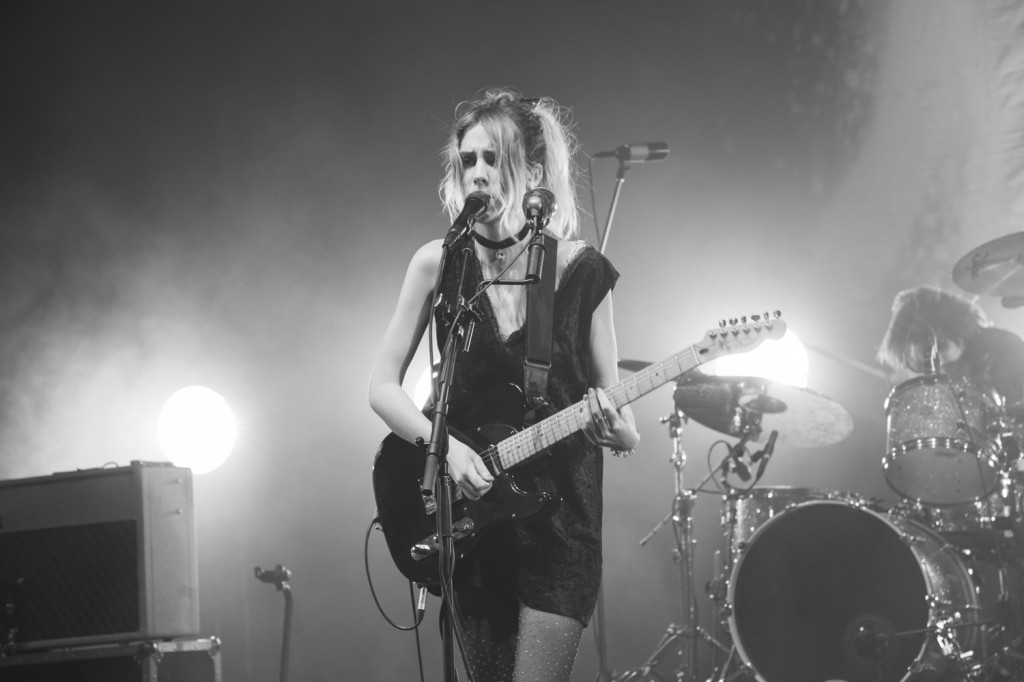 Wolf Alice are an amazing band that are nowhere near a one trick pony, it’s evident from tonight’s gig and their debut LP, My Love Is Cool, that there is so much more to come from this lot.

Tipped as ‘One of the gigs of the year,’ last night Wolf Alice made Brixton Academy their own with a little help from tour friends Drenge and Made Violent.

Pulling open the door to main room of Brixton Academy, I was hit hard by the soundwaves reverberating from the stage. Made Violent, a three-piece, skater/ skuzz outfit from Buffalo, New York, had just started their set. The guys deal in fuzzy guitars and feel good sounds from across the pond. Two thirds clad in denim jackets the three piece try to connect with the crowd with the failsafe bigging up the other acts but anything else they do falls short and the crowd seem disinterested. A shout of “Let’s see what you got Brixton!” sees the band cut loose and thrash around for a second. Bassist and frontman Joe White falls to his knees and writhes around stage for probably the fourth time. ‘Wasted Days’ sees guitarist Rob Romano, who looks surprisingly Like Graham Coxon, go nuts and bound around stage like a small child full of jelly babies. An abrupt end and shout of “Thank You!” is all we get as a goodbye as Made Violent leave the stage.

Talking to some of the crowd afterwards the band were described as “so so 90’s, his scream and hair reminds me of Kurt Cobain”. Between sets a shout of “Oh Vienna!” erupts from the crowd as Ulrtavox is played over the speakers, and the same happens for ‘This Charming Man.’ But those cries are cut short by the arrival of the next act, Drenge!

Smoke and dim lighting fill the space as Eoin Loveless drags his guitar slowly across the floor as if he was in some form of cheap slasher movie, before launching head first into ‘Running Wild.’ The front of stage bounce along as the rest of the Academy head nod in appreciation. “Hello Brixton!” Intro’s ‘Face Like A Skull,’ quickly followed by ‘We Can Do What We Want,’ the throng step it up a notch as beer and bits of clothing go flying. Eoin head-bangs around stage, as a small pit opens up formed of sweaty indie kids. What is highly entertaining is watching incredibly fickle teens mosh, as they open a small pit but no one wants to be the first to jump in, so it ends up closing… unused.

Drenge hammer through their set, barely interacting with the crowd as tracks from Undertow bomb compared to cuts from their debut.  ‘Fuckabout’ gets a sing-along, the band play a clever joke on the last chorus with the lyrics, “when words get stuck in your mouth…” the guys leave a large pause as the audience slowly clock on. In my opinion ‘Bloodsports’ is one of Drenge’s big hitters, but the intro gets little to no reaction from the room, but the heavy parts gets them pogoing like crazy. Drenge’s drummer slumps over his kit, exhausted as the band finish their set as they started it: with a wall of feedback.

15 minutes later than billed, the curtain slowly goes up to a huge cheer from the audience, but nothing actually happens. A couple of minutes later Wolf Alice walk on stage to monstrous cheers. In my eyes, by opening with the hidden track from their debut album, this was a slight ploy by Ellie and the rest of the band to see who has truly listened to the whole of My Love Is Cool, and it did split the room as more than half of Brixton Academy look confused as hell. A scream of “Brixton!” sets us right back in, as the slow build from ‘Your Loves Whore’ sees hands are aloft everywhere, and the crowd bellow out every word. The sound is brilliant. The band launch straight into ‘Freazy,’ an indie-pop gem of a song, as the devotees at the front groove and bop along. The feel good vibe is amazing. I suddenly get a sense that this gig is something special, a milestone within Wolf Alice’s career and the start of something much, much bigger.

Bassist Theo Ellis shouts “Brixton Academy, this is for all of you. Thank you so much!” This leads into ‘Bros,’ and a massive cheer goes up as the dancing continues. Everyone claps along to the build and as they collectively lose their shit — band included — to the final chorus. Drinks go everywhere as the whole of the venue bounces in unison. ‘Soapy Water’ sees the mood pulled back to an alternative style ballad; the backdrop twinkles like stars as Ellie stands front of stage singing her heart out. She jumps of stage and returns with a mini pink sombrero and proceeds to wear said hat for the most of ‘Lisbon’ until she joins the rest of the band in thrashing around to the post-chorus.

Wolf Alice are, however, slightly overwhelmed by the occasion. It’s plain to see as they rarely interact with the crowd, opting for shadows on stage between tracks.  My Love Is Cool is a mixture of ballad, epic pop, indie-jig and full on grunge/ skuzz and Wolf Alice are play it to its full brilliance.  Ellie’s vocals are truly swimming in reverb — this occasionally creates a problem as she screams down the mic, but it only becomes problematic once or twice.

The crowd shout and cheer in appreciation at any given moment, even when the drummer tries to introduce ‘Swallowtail,’ the volume of Joff’s lead guitar destroys the soft sound of the track, but the band fix the problem by finishing it off with a thrash ending to bring the sound back to a gig vibe.

Theo runs up and down front of stage whipping the throng into a frenzy, the guys jump hard into ‘Fluffy’ charging into about the stage, crashing into each other as they go. The lyrics “What’s there to do…” is replied with the entire room screaming at the top of their lungs “I got nothing!” Another seamless link into ‘She,’ Wolf Alice are on a huge, huge roll! It’s a pure wall of sound moment, but everything is clear and crisp. On they go, hammering out ‘Moaning Lisa Smile’ and ‘ You’re a Germ.’ It’s nuts but so much fun.

An abrupt end as the four piece walk off stage, but the lights don’t go up. Encore time! They come back with ‘Turn To Dust’ and the truly beautiful ‘Blush’ gets the biggest sing-along of the night, the sound fills the entire Brixton Academy. “Honest to god, you have no idea how much this means to us” announces Theo. The size of the smile of Ellie’s face says it all. “Ay!” launches everyone into ‘Giant Peach,’ the final track of the night. The whole venue goes nuts, Ellie windmills her ponytail as the rest of the band bounds around the stage, confetti cannons announce the biggest riff of the album and, in my opinion, of 2015. It’s truly breath-taking. “Thank you!” as all four jump off stage to meet their adoring fans.

Wolf Alice are an amazing band that are nowhere near a one trick pony, it’s evident from tonight’s gig and their debut LP, My Love Is Cool, that there is so much more to come from this lot.