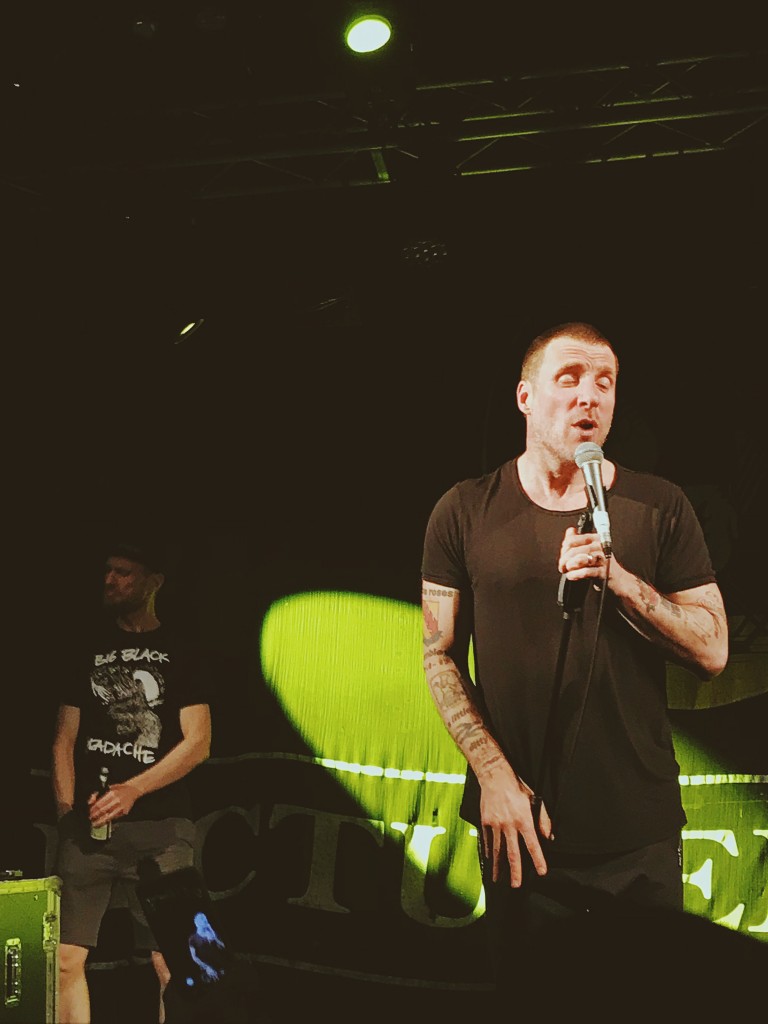 As Storm Gareth rattles its way through Holmfirth, Sleaford Mods storm the stage of the excellent Picturedrome; performing tracks from their latest record Eton Alive, among tracks from throughout their discography.

The venue is both intimate and grand at once, small yet beautifully decorated. The sloping standing section offers an excellent view from wherever, and the peering side arches provide a view impossible to be obscured by the mass of flailing, sweating bodies.
Manchester post-punk group LIINES perform as support, initially cutting a serious look, clad in all black, before  flashing cheesy grins at the Holmfirth crowd who welcome them with open arms. Their rhythm section is so tight the songs are almost danceable, though the fuzzing guitar and soaring voice pushes the songs in a punchy, 90s style alt rock direction. Though the similarities between some tracks make it a little difficult to immediately differentiate songs, the group are definitely one to watch for the future and as mentioned, very well received by a crowd who are clearly here to see the headline act.
The stage is set for Sleaford Mods in a flash, like their tunes their set-up is minimalist; a makeshift laptop stand, bottles of beer for beat-maker Andrew Fearn and bottles of water for vocalist Jason Williamson. The only notable luxury is the padded grip on Williamsons mic stand to provide comfort to his aggressive clutching of it ; they’ve gone all showbiz.
They open with “Into the Payzone”, a plodding number that builds up the tension for the manic speed of following track “Flipside”. Whilst they are still something of an “leftfield” or “alternative” act, it is clear that they have picked up a few attributes of more mainstream bands. “BHS” “TCR” and “Jobseeker” all have sing-along choruses belted back at the band, and the pulsating bass of “Kebab Spider” results in a surprising amount of “proper” dancing from the crowd which continues throughout the evening. Obviously there is a strong punk element to much of the groups music and live performances, and there is no shortage of that on display (at one point security make themselves known in the pit during a particularly rough “Jolly Fucker”), but there are parts of the evening where the audience seemed to be moving as thought they were at something resembling a Stone Roses dancefloor; which is brilliant.
Williamsons ability to inhabit and evoke the emotions of his one liners borders on the extraordinary,his manic vocal inflictions are one second cartoony and comical and the next quickly snapping into howling barks and vein popping screams. His movement is relentless, especially compared to Fearn, who is something of a cult hero to fans for his quiet background bopping. Williamson kicks, spins, bounces and twitches for the full hour or so, one minute Benny Hill and the next Iggy Pop; always an entertaining spectacle.
Leaving the stage after performing “Discourse”, Williamson promises that after this nights showing they will return to Holmfirth, and judging by the roaring reaction from the crowd; the feeling is definitely mutual.