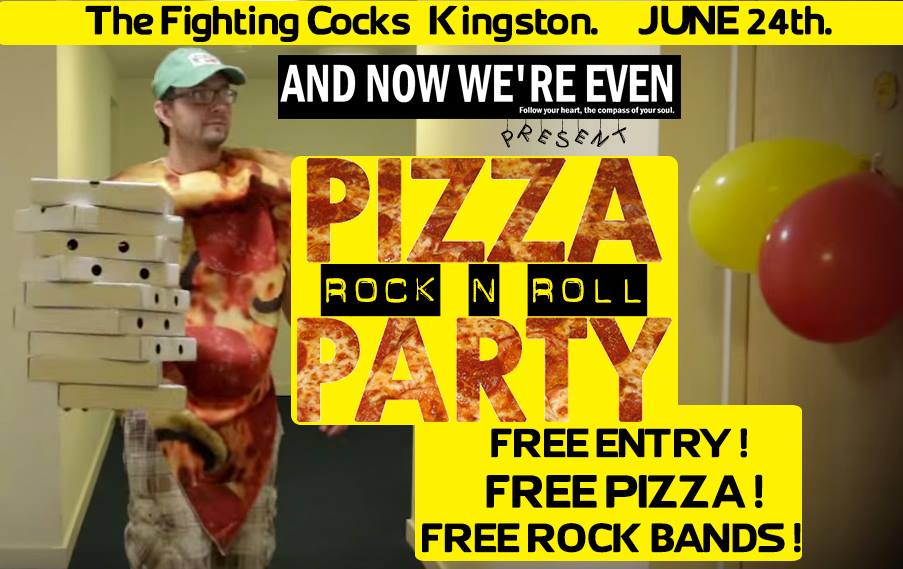 It can be any number of things that encourages the average person to pick up an instrument and take to the stage. Every so often, however, it is little more than a group of friends coming together to support a common cause. One such occasion took place on Friday 24th June at the legendary Fighting Cocks bar in Kingston Upon Thames, where local punk rockers And Now We’re Even were joined by Tally Spear, Adult World and Beyond Reasonable Doubt to make some noise and raise a little money for War Child in the process.

“Life’s a lottery…and I don’t think it’s fair that you’re just born in one place and have to have a life that sucks,” says Resh, lead singer of ANWE and mastermind of the whole event, when asked why he chose the charity. “I’m originally from Iraq, and if my parents hadn’t left I always wonder what would have happened to me, so I don’t take that for granted, being here, and I like to contribute”. And contribute is what everyone involved has done in spades, from every member of every band to all those dutifully manning the merch stand and, perhaps most importantly, those in charge of the free pizza.

First up to the stage is Tally Spear, sister of former drummer Taran and longtime friend of ANWE, having appeared twice as backing singer on their albums. “It’s just getting our friends together and having a party, man,” says Resh, on what went in to choosing the line up. Spear is indeed a wise choice for opener, and is definitely the most tranquil of all the acts on the bill. Accompanied only by her acoustic guitar and harmony singer/percussionist Rosie, her serene folk pop style and souring vocals are a joy to behold, with a staggering version of Neil Young’s ‘Ohio’ thrown in for good measure.

Following a short break for change and raffle – which takes place between each act and includes such tantalising prizes as a Street Of Rage Ltd Edition vinyl and an original 1991 Gameboy – Adult World take over, and the contrast between them and the previous performer couldn’t be greater. Having played in another form alongside the headliners 10 years previously at this very venue, this Leeds-based three piece are all about sweat, noise, attitude and eye-watering power stances. The blistering blend of garage rock and punk leaves barely a pause for breath, yet one can’t help but feel they’re somewhat better off for the experience.

Beyond Reasonable Doubt add yet another new sound to the mix. Although having apparently not played together in some time, you’d be forgiven for letting this pass you by as the group’s more straightforward approach to punk brings the show back down the earth after their rather more chaotic predecessors, leaving everyone in a great spirits before the final act. And Now We’re Even are met with great applause from the audience, glad to see the band return after a three year live absence. ANWE are something of an enigma in this regard, having rarely performed but putting out a surprising number of full length albums over the last few years; their fifth album, ‘Hygge’, came out earlier this year, and they are reportedly working on a sixth. A “lack of success” is the apparent driving force behind their output; “we don’t really have a huge following or anything, so we keep trying to do better and better and better until we’re satisfied that we’ve done the best that we could”.

This revelation comes as quite a surprise, as their performance is anything but that of a band that lacks experience and success. Playing a variety of numbers from their entire back catalogue, ANWE put on a terrific performance that manages to simultaneously capture the spirit of their music perfectly whilst refusing to take themselves too seriously. A good amount of on-and-offstage hijinks ensue, including a rather spectacular “Wall of Love” (like a Wall of Death, only with more hugs). It’s a great way to end the evening as it personifies the camaraderie that has made the whole event possible. And what a successful night it’s been. With over £200 raised for War Child, all involved can really be proud of their achievements. A sequel to the Rock N Roll Pizza Party is coming 23rd September and, if the first is anything to go by, we’re all in for a good time once again.

Want to aid And Now We’re Even in raising money for War Child? Click here to donate and help them reach their goal!

Or even better, come down to the next Rock N Roll Pizza Party and help support the cause