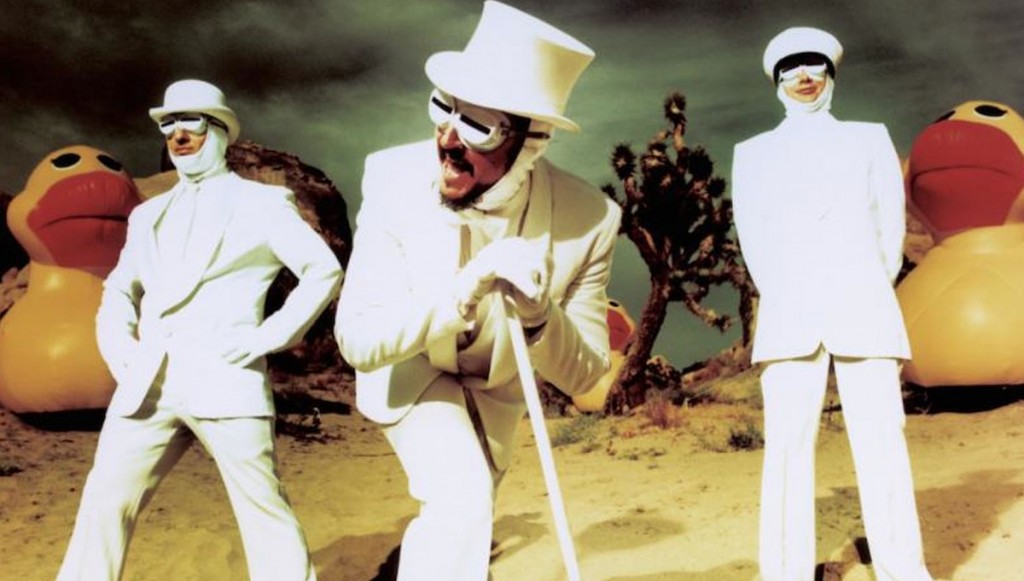 Funk metal pioneers Primus see off their European tour in as exhilarating and bizarre a manner as only they could achieve.

It’s a baking hot Tuesday night on 20th June in Camden Town and something quite spectacular is happening at the Roundhouse. Coming to the last date of their European tour, wacky serial genre-dodgers Primus descend upon this North London venue to entice and titillate their audience once again, many of whom have little idea of what to expect, but few are left any less excited.

The sheer diversity of the crowd is a unique sight; hippies, punks, metalheads and just about everyone in-between young and old have gathered in the packed-out auditorium. No support presents itself, just a few carnival numbers seeping over those in attendance from the PA. It’s been three years since Primus’ last album Primus & The Chocolate Factory With The Fungi Ensemble, and over half a decade since their last full offering of new material, Green Naugahyde. With a new album reportedly in the works and scheduled for a release sometime in late 2017, it’s anyone’s guess what may in store.

And just like that, with surprisingly little fanfare, the trio take to the stage and lurch into a lumbering rendition of, what else, ‘Here Come The Bastards’ from their 1991 classic Sailing The Seas Of Cheese. The line up is what nearly all would refer to as their classic incarnation: mainstays vocalist and bass virtuoso Les Claypool and guitar wizard Larry “Ler” LaLonde, with returning drummer Tim “Herb” Alexander, who before rejoining in 2014 had not appeared on an album since 1995’s Tales From The Punchbowl. The setlist features a nod to just about every album from their back catalogue, minus 1999’s guest-heavy Antipop and their aforementioned Roald Dahl reimagining.

The opening numbers work perfectly to whip their crowd into a frenzy, with ‘Bastards’ followed by fan favourites ‘Wynona’s Big Brown Beaver’ and ‘American Life’. Their backdrop is a projected collage of psychedelic imagery, mid-20th century stock footage, their own music videos and even clips from Captain Scarlet at one point, perfectly framing the smorgasbord of styles Primus bring together. Their performance is seems wholly professional yet also humble; these three men are master of their craft, but are still looking to have fun with it. With the seldom-performed ‘Nature Boy’, Claypool hits a bum note, loses his place, and with barely more than a second though and a cheeky grin in the direction of his compadres, launches into scorching version of ‘Groundhogs Day’. Carrying on in this playful manner, the upright bass and pig mask are brought out for sensational renditions of ‘Jilly’s On Smack’ and ‘Mr Krinkle’, sending the crowd into raptures. With one of their earliest numbers ‘The Heckler’ and the whirlwind extended jam of ‘Harold Of The Rocks’, Primus cap off their first set.

In one of the most unique and downright inspired uses of an interval many will have seen, the break is taken up by a trio of 1930s Popeye cartoons projected onto the big screen, and it’s worth noting how many fully-grown adults forewent the rush to the bar in order to enjoy these retro antics. It’s soon back to business, though, as Primus return to the stage with ‘Spegetti Western’ and a couple of numbers from Green Naugahyde: ‘Spegetti Western’, ‘TV Moron’ and the fantastic ‘Lee Van Cleef’, broken up by ‘Over The Falls’, one of few tracks from 1997’s The Brown Album to remain in their live repertoire. Even more so than before, the sheer musicianship of the trio is astounding. While many debate over whether their music falls into the categories funk, metal, alternate rock, avant-garde and progressive, the sheer groove Primus manages to maintain throughout is undeniable. Alexander’s steady, no-frills yet off-kilter drumming style proves the perfect foundation as LaLonde leaps between intricate fret magic, simple riffs, blistering solos and echo-soaked insanity. Les Claypool is, of course, truly in a world of his own, and such an inventive bass player is a rare commodity. His unparalleled skill allows him to use his instrument for rhythm and lead simultaneously, and through slaps, pops, strums and bowing creates a sound so unbelievably muscular with seemingly little effort.

The second set concludes with a selection of earlier favourites: ‘Frizzle Fry’, a medley of anti-war anthems ‘Too Many Puppies’ and ‘Sgt. Baker’, ‘My Name Is Mud’ and the legendary ‘Jerry Was A Racecar Driver’, before a short but inevitable pause leads into their encore. In one of just a handful of times the band directly address the crowd, Claypool remarks on the old trope of established bands sneaking in new material among older songs, before Primus go ahead and do exactly that with ‘Seven’. It’s a bold move but fits in perfectly, increasing anticipation for the upcoming album. The finale is somewhat unexpected as Claypool, not quite able to find the intro riff to ‘Southbound Pachyderm’, gifts the audience with an extra song in the form of ‘Mr. Knowitall’ before closing of proceedings with a terrific version of the previous number. And just as quickly as they had arrived, the trio bid the adoring fans a brief farewell and leave the stage.

It may be a tired cliché, but Primus are one of those bands who you haven’t fully experienced until you’ve witnessed them in a live setting. Such creative music deserves to be enjoyed as such, and their ability to bring such a vast array of people together encapsulates the broadness and eclectic nature of their sound. With the 30th anniversary of their debut release on the horizon, the future still looks bright for these funk metal juggernauts as their next album fast approaches.