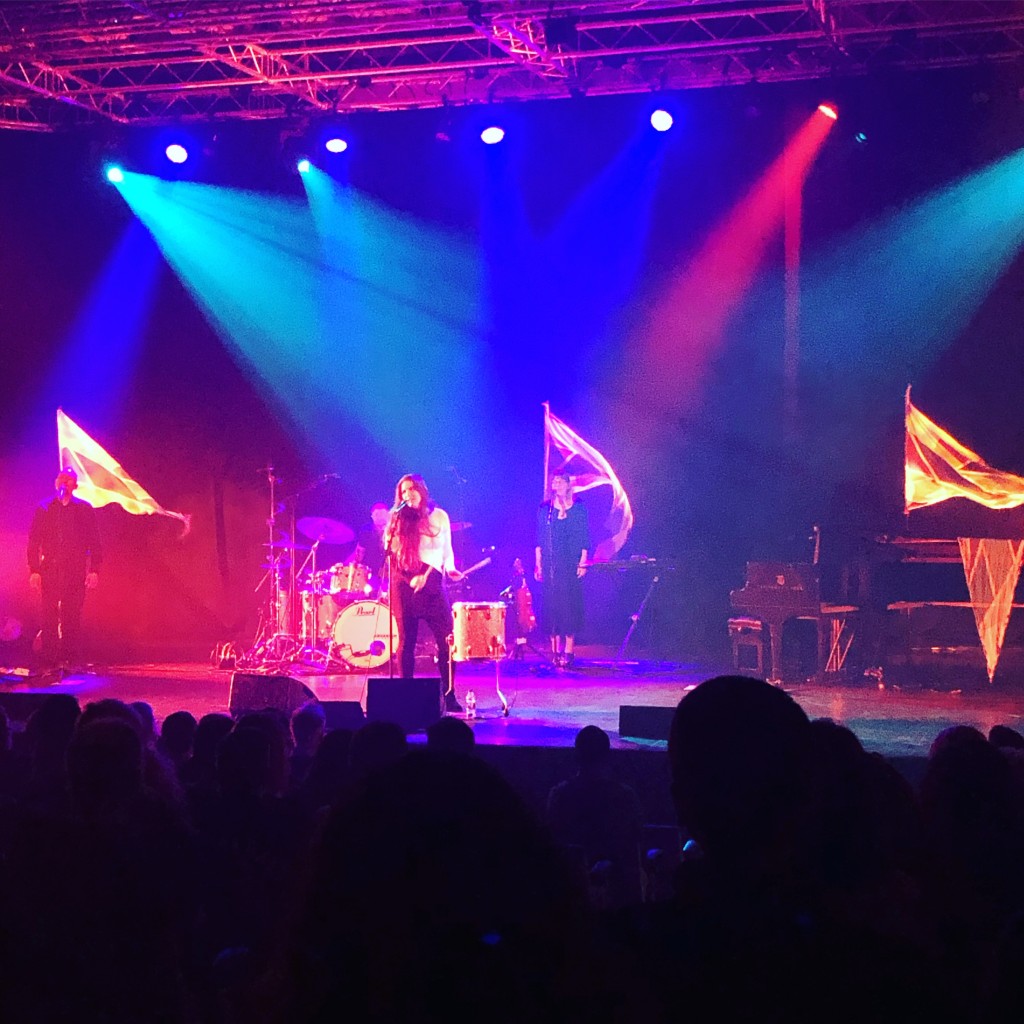 British singer, pianist and songwriter Phildel put on a stunning performance of songs old and new at The Southbank Centre’s Purcell Room.

The special one-off performance ties in with the forthcoming release of her new album Wave Your Flags, the long-awaited follow-up to her 2013 debut The Disappearance of the Girl.

Wave Your Flags is an album about overcoming hardships and finding the power within yourself to make it through a stronger person. The songs draw on Phildel’s experiences growing up of the abuse she suffered and her failed attempt to convict her abusive stepfather. The resulting tracks are as turbulent and fractured as the experiences she suffered but the album is also peppered with odes to those who have guided her through the darkness.

The set opened with Wild Sea, a beautiful track that ebbs and flows like the sea, featuring an intensely deep synth and atmospheric baseline. Phildel compares herself to a wild sea due to the nature of her past but thanks her partner for being by her side regardless “I know that I’m hard work, you know I’ve been so hurt.”

Following this intensity of Wild Sea, Phildel moved onto another track from the new album, Electric Heights. Piano keys come to the fore in this track and Phildel’s breathy vocal was crystal clear and beautifully offset by the operatic backing vocals and buzzy synth.

The pace was taken down a notch for the opening of Oh Love, an ode to her partner who’s been her rock and biggest support. Phildel took to the piano, demonstrating how skilled she is as a pianist, and sang angelically and passionately with more goosebump-inducing accompanying harmonies.

The stage set up was perfectly minimal with three billowing flags but there was a beautiful light show that revolved all around the room and was particularly breath-taking during Afraid Of The Dark, the first track Phildel sang that evening that was from her debut album. The gentle guitar accompaniment added an extra depth to the keys and pared-back synths and drew out the intensity of Phildel’s voice.

Phildel introduced Glide Dog as her bloodiest track and it goes heavier on the electronic elements with reverberating synths and a deeply intense baseline. Phildel said this track is about problematic past relationships: “When I go into really intense hatred mode I know it’s almost a little bit funny.”

Moonsea was a much gentler offering following the intensity of Glide Dog before moving into Lamb which she introduced as being a song to her inner child. Phildel wrote the track after breaking contact with her family following the failed conviction of her abusive stepfather. During this time she grieved the mother she had lost and Lamb was born. The lyrics “Fold into my arms, you are loved” were sang with such heart wrenching intensity and the operatic backing vocals made for a gloriously angelic interlude. On talking about the track Phildel said “It’s saying, no one was there for you then, but I am here for you now, keeping myself safe from destructive relationships.”

A standout of the evening was the wonderous Emblem, angelic harmonies colliding with heavy electronic elements and drum pad beats. Phildel has a wonderful skill of combining the classic sound of the piano with electronic manipulation and synths and it was spellbinding in a live setting.

Storm Song was up next, an incredibly catchy track where Phildel berates herself for past mistakes  “I’ll send a storm to capture your heart and bring you home.”

The set ended with Glorious, a track which certainly lives up to its name. It opens like a dive-bomb in a still pool of water and Phildel’s vocal reached new operatic heights, for sure leaving everyone in the room with goosebumps. The track marks the end of her struggle with her past and is an anthem for overcoming hardships.

We were treated to an encore which included a beautiful stripped-back working of Floods. Just Phildel and a glockenspiel so the raw nature of the track could swell and fill the room. As the track concluded Phildel left the stage to a standing ovation.

Without a doubt this was one of the most breath-taking shows I’ve been to as every song was sung with a palpable intensity and the audience were made to feel like they were taken on a personal journey through the events of Phildel’s past.

Find out more about Phildel here and have a listen to Electric Heights from the new album Wave Your Flags  below which will be released on 3rd May.