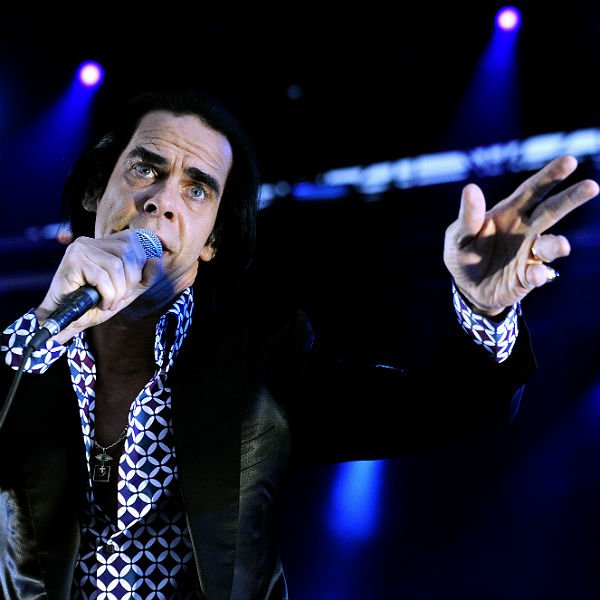 Nick Cave and several current/former Bad Seeds take to the stage at the Royal Albert Hall to deliver one of 2015's most breathtaking live performances.

It’s 7:59pm on Sunday, 3rd May, and the one minute warning has been sounded. Dozens of attendees are dashing up and down the winding hallways of the Royal Albert Hall, desperately trying to find their seats in this extraordinarily expansive venue. Reaching their destinations just in time, they have barely time to take in the breathtaking sight of the packed-out auditorium before this truly spectacular nights gets underway.

Rapturous applause fills the hall as Nick Cave, impeccably dressed in his trademark dark suit, takes to the stage with his compadres. Although only Cave’s name appears on the bill, the entire band is comprised of former and current members of the Bad Seeds, and indeed all appear on the group’s most recent album, 2013’s ‘Push The Sky Away’. Zurich-born Thomas Wylder, the longest-serving Bad Seed, takes up drum and percussion duties, whilst original bassist Barry Adamson features on keys. Martyn P. Casey, who also appeared as part of Nick Cave’s side project Grinderman, takes his place on bass guitar and backing vocals. Last, and by very no means least, is the musical magician that is Warren Ellis. A Nick Cave mainstay since the mid-1990s, he sits calmly behind his impressive beard, surrounded by what seems to be every instrument and electronic device known to man. It’s a fitting ensemble, as the material for the evening is to feature songs from nearly every album in the Bad Seeds’ catalogue, from the crashing cacophony of their early work to the more refined modern day.

The steady, lurching bass of Casey signals the beginning of ‘Water’s Edge’ and, in turn, the start of the show. Cave spends the duration of the performance either sat centre stage at his impressive grand piano, or confidently striding up and down the front of the stage, working the crowd expertly. He is a terrific performer, and perhaps not in the ways one would initially imagine. Given the somewhat sombre and macabre nature of his songs, it might be surprising to some that Cave in fact boasts a very animated character, a wicked sense of humour and, whilst not without an element of snark, a clear and profound appreciation for his audience. A prime example of the polarity of his personality comes when, in full flow, he flings his wandering mic aside whilst hammering away at the ivories, only to have to go looking for it a couple of songs later in an almost sheepish manner. He captures the emotion of his music perfectly, whether it be more reserved as during his heartbreakingly beautiful solo piano rendition of ‘The Ship Song’, or howling like a man possessed during ‘From Her To Eternity’.

Although no one album can really claim to have been the centre focus of the show, the first part of the set dedicates a certain amount of time to ‘Push The Sky Away’, with ‘Higgs Boson Blues’ being a real highlight. Even more meandering and hypnotic than the studio version, Cave wanders into the crowd, so caught up in the moment he doesn’t notice he’s dragging his mic cable, stand and several other pieces of equipment into the audience with him. He singles out individual members of the congregation, staring directly into their eyes and enquiring “can you feel my heart beat?”. It’s a chilling moment, and all the more fantastic for it. Many other fan favourites feature in the set: be it solemn, heartfelt ballads ‘Into My Arms’ or ‘Black Hair’ from ‘The Boatman’s Call’, the chugging, apocalyptic sermon of ‘Tupelo’, a hair-raising rendition of ‘Red Right Hand’ or the legendary confessional of ‘The Mercy Seat’. The first set ends with an incredible version of ‘Jubilee Street’, greatly satisfying the many audience members who have been screaming its name from the start.

After a short pause the band return to the stage with a tremendous cover of Leonard Cohen’s ‘Avalanche’, the one song that Cave openly admits “changed everything” for him in his youth. More Bad Seeds classics follow, with ‘And No More Shall We Part’, ‘Breathless’ and ‘Jack The Ripper’ all making an appearance. The sight of Nick Cave manically hacking away at a child’s xylophone before stalking the stage like a demon during ‘Up Jumped The Devil’ is superb, highlighting the dramatic nature of his creative mind. Warren Ellis also deserves special mention for his contributions to the show, as he shifts flawlessly between violin, guitar, synths and loop pedals to name a few. His musical touches range from elegant subtlety to ear-splitting sonic assaults, and it is clear that the performance would lose a great deal of its uniqueness without his input. ‘The Lyre Of Orpheus’ seemingly closes the show, but the group do return once more for a tremendous rendition of ‘Push The Sky Away’. The sight of the entire audience of its’ feet joining in with the songs chorus is deeply haunting, and the perfect way to end the concert.

As the lights go up and those in attendance file out, there is much that can be said for the last two and a half hours. The stagecraft of Nick Cave and his cohorts is one of the most intense, most emotional and most captivating spectacles any fan could hope to see. Cave builds a rapport in seconds, draws the audience in and keeps them there without pause for breath. The band’s cohesion is impeccable; they know their music inside out and work together to produce a sound and presence like no other. The energy of a Nick Cave show is one that has to be experienced to be truly appreciated, and to catch one in your lifetime is a must for any music fan.