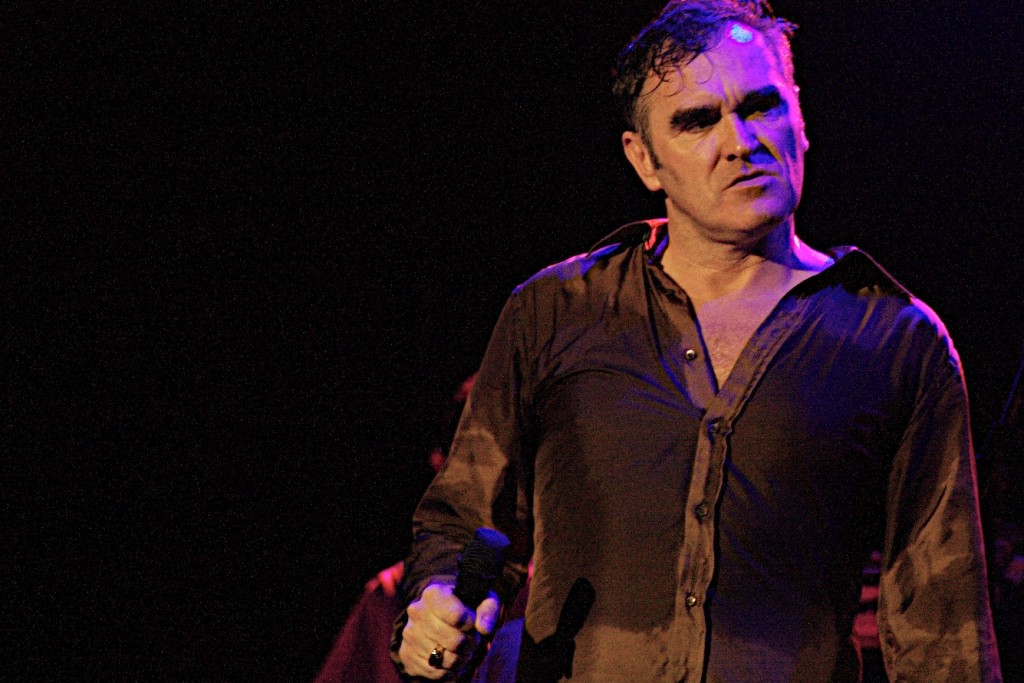 Twelve thousand or so left the chilly West Yorkshire wind on Saturday night, shuffling into the First Direct Arena to see legendary Mancunian crooner Morrissey, here in the city of Leeds to promote his 11th studio album ‘Low in High-school’.

The album, which was released in November last year had a positive run-up, with lead single ‘Spent the Day in Bed’ doing considerably well thanks to its poppy and playful keyboard riff and Morrissey’s plea to the public to “Stop watching the news!” Whilst the record gained mixed reviews from critics and the singer became embroiled in some mild media controversy (stop me if you’ve heard this one before?), it was clear from the number of adoring fans seen piling into the arena that Morrissey is still a cultural figure with something to say, and a devoted fan base who will listen.

There is a lengthy wait for the show to begin and instead of a support act, the crowd is treated to a compilation of Morrissey’s favourite music videos with The New York Dolls, The Ramones and Dionne Warwick being projected for the crowd for the last thirty minutes before the man himself graced the stage. The genius inclusion of Russian pop duo t.A.T.u covering ‘How Soon is Now?’ was seen by the patient audience becoming full of voice on the song’s chorus, leave it to Morrissey to have his crowd singing his songs before he does.

Rapturous applause and screams of joy erupt as Morrissey took to the stage just after nine, only for some of them to be left scratching their heads as Moz and his band kicked off the night with the flamenco-styled Elvis b-side “You’ll Be Gone”. It was a risky move, and whilst it goes down well, I’m sure with the amount of anticipation that had built, any other song from the rest of the evening would have blown the roof off the place.

The atmosphere begins to pick up soon after, especially during ‘Suedehead’ Morrissey’s debut single, to which he stalks the stage as his adoring crowd swoop and sway towards his changing direction. Morrissey’s relationship with his audience has become the stuff of music legend, not many artists can boast the level of dedication that Morrissey receives from his fans and it is clear to see from the number of towering quiff hair-dos and ‘Queen is Dead’ t-shirts seen around the arena that the fans are out in full force to see their hero. Even so, it becomes clear that some of the audience is expecting a  set heavy with hits, and great deep cuts such as ‘If You Don’t Like Me, Don’t Look At Me’ and ‘Munich Air Disaster 1958’ get a somewhat muted reception.

There could be no complaints about the performance on stage,  Morrissey was on great form, his voice clear and soaring on the ballads such as ‘Hold On To Your Friends’ and then full and punchy on the heavier tracks like ‘Who Will Protect Us From The Police’. Morrissey seemed in good spirits on stage, whipping the mic cord to and fro and reaching out to the lucky few on the front  for a handshake but kept it quiet between songs, though when he did speak it was in his trademark wit; jokingly introducing guitarist Boz Boorer as hailing from Skipton and responding to audience calls for his shirt to come off with “you must control your restless libido!”. The band was tight and muscular, especially on the ‘Low in High-School’ material, highlights being the soldier skeptic epic ‘I Bury The Living’, the ‘Your Arsenal’ reminiscent glam stomp of ‘My Love I’d Do Anything For You’ and the gorgeous ‘Home is a Question Mark’.

Aside from the communal roar of ‘Spent The Day In Bed’ it was when Moz decided to delve into the back pocket that crowd best found their voice, early solo singles ‘Suedehead’ and ‘Everyday is Like Sunday’ sounded massive and classic songs from The Smiths ‘I Started Something I Couldn’t Finish’ and ‘How Soon is Now?’ were full of energy and power especially the latter with its iconic, shimmering  guitar lead sounding beefed up by guitarists Jesse Tobias and Boz Boorer. The night was rounded off in the now common carnage of Morrissey’s shirt being flung into the pit of waiting fans during the encore of ‘Irish Blood, English Heart’.

Whilst some of the songs from ‘Low in High-School’ I felt were unappreciated and therefore the atmosphere stalled somewhat in these moments, there was more than enough to please the casual Morrissey fan in this set. For the hardened Moz fan, whilst it might not have been the most impassioned gig they will have seen over the years, the fact that Morrissey is still playing to this quality, I’d wager it won’t be their last.

It certainly won’t be mine.