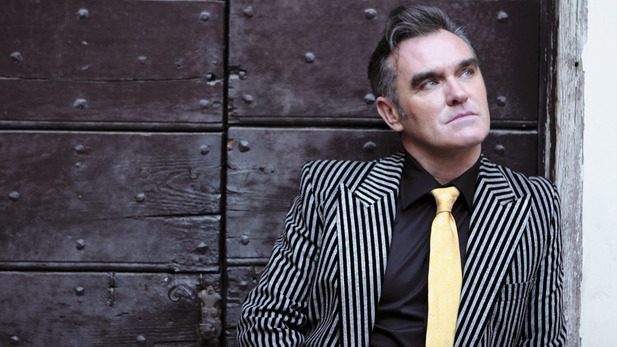 Morrissey knows how to end the night like the best of them, satisfied and loved yet always wanting more.

To say 2014 was an  eventful year for Morrissey would be bit of an understatement.

A new album that was later followed  by record company troubles, treatment for cancer and many gig cancellations, he returns for his first full tour of the UK since 2011.  He has recruited folk singer Buffy Saint Marie to open tonight and while she obviously does not receive the same adoration that Moz does, her politically charged blend of folk rock goes down well. Soon after, a film appears showing a range of Morrissey’s personal choice of music video’s featuring The New York Dolls, The Ramones, Penetration, and Visage featuring the late Steve Strange. Unsurprisingly the biggest cheer from the Leeds crowd during the video was the montage of Thatcher’s Britain with “Ding Dong the Witch is Dead” playing over the top.

While anticipation for the Ex- Smiths man is high, the show is not sold out and there’s a few empty seats around the 13,000 capacity arena.  Once Morrissey enters the stage however, you would never know it. Starting with the Smiths album opener and title track “The Queen is Dead” to a large, mocked up backdrop of her swearing, the place goes berserk. His fans are some of the most devoted around, clambering over heads to simply touch the hem of his garment and crooning every word straight back at him.  Reports from his gigs in Nottingham and Cardiff suggest that the large amount of new material played fell slightly flat, and while they certainly don’t rouse the crowd as “Suedehead” or “Every day is Like Sunday” do, they were received with respect and admiration and “Staircase at the University” and “Kiss me a lot” are already sounding like live standards. The most polarizing  song on the night was actually “Meat is Murder” with the blood red lighting and video of slaughterhouses leaving one half of the crowd completely  fixated, stood quiet and still with open jaws, while the other half turned away to talk or simply left for the bar.

Morrissey seemed to be enjoying himself greatly and taking the last few years of illness into account; his voice is on top form and really shone on “Trouble Loves Me” and The Smiths classic “Stop Me If You Think You’ve Heard This One Before”. While his band have been past criticized for having a more”heavy handed” approach to intricately layered Smiths classics, I believe this is Moz’s choice to distance himself from the jangly sound of Johnny Marr, and to their credit the band were great, especially in the flamenco infused “Neal Cassidy Drops Dead”

Finishing the show with the always excellent  “First of The Gang to Die” before ripping his shirt away in to the crowd of adoring fans shows that Morrissey knows how to end the night like the best of them, satisfied and loved yet always wanting more.

1. The Queen is Dead

3. Staircase at the University

4. World Peace is None of Your Business

7. I’m Throwing my Arms Around Paris

12. What She Said/ Rubber Ring (Snippet)

14. Kick the Bride Down the Aisle

15. The World is Full of Crashing Bores

16. Stop Me If You Think That You’ve Heard This One Before