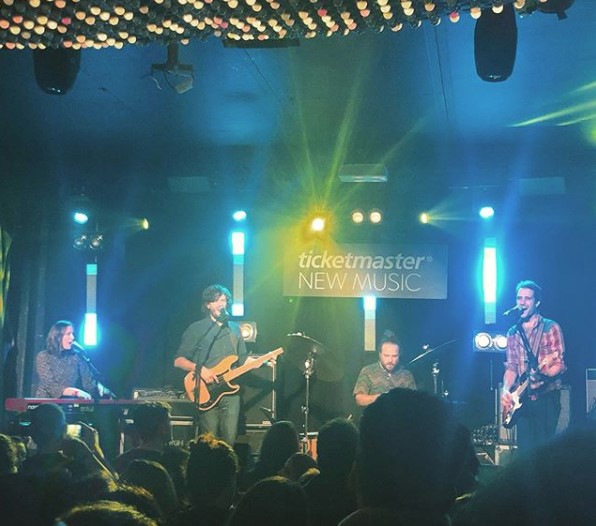 Spanish folk-pop band Morgan played a one-off gig at Colours Hoxton last week. The band showcased their new single Another Road as well as previous hits to a lively crowd  of friends and fans.

Another Road opens with funky keys and layered with groovy guitars. Lead singer Nina de Juan possesses a distinguished, gravelly vocal that cuts a slice through the smooth rhythm. The chorus of “oh no matter where you go, it doesn’t matter where you get it be part of the road” is addictive and was anthemic in a live setting.

The set was a combination of upbeat and downtempo and English-language and Spanish-language tracks, demonstrating the band’s versatility. Home was a brilliant example of the pared back side to Morgan where Nina’s vocal takes centre stage.

A highlight of the set was Sargento de Hierro with its ballad-esque start that builds gradually into stirring crescendo. The electric guitar solo was all the more breathtaking with every note rippling through the crowd. Every band member had their moment to shine where they’d demonstrate their talent from Paco Lopez on guitar to David Schulthess on the keys, showing that every one of them on the stage was as important as the next.

The funky cover of Daft Punk’s Lose Yourself to Dance was an unexpected delight that got the crowd moving and the party going before a moving acoustic performance to close the set.

Morgan have been touring constantly around Spain since the release of their debut album North in 2015, playing at festivals such as Mad Cool and Sonorama. Second album Air was released in 2018 and they’re now taking time out to record their third album. Morgan are definitely ones to watch as their upbeat, funky show was certainly one to remember and I hope they continue to build their UK fanbase.

Find out more about Morgan here and have a listen to new single Another Road below.