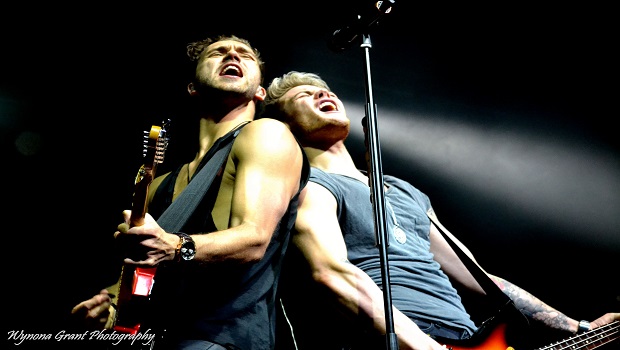 Almost finished their massive UK tour, encapturing some major venues across the spectrum, Lawson arrived at the artsy Olympia Theatre, Dublin for the second last date, until next time…

Opening the night on an energetic chord was Up and Coming UK Pop group, Paighton. Riling the crowd of quite easily 90% teenage girls, these bouncy, upbeat performers were picking up fans by the minute. Giving their latest track ‘Drive’ a spin, Paighton certainly had the crowd in tune with their sound. Interacting with the crowd as they pulled off their friendly nature, there set was almost too short for what the crowd would have supported- what an intro!

Following this fun, animated performance came a similar in energy and atmosphere but slightly more Rock orientated Room 94. Hailing from North London and comprising of three brothers- Kieran, Dean and Sean Lemon, as well as bassist Kit Tanton, these guys brought a “next big thing” to the Olympia. Frontman, Kieran Lemon used both his vocals and his real band-member appearance to wow the crowd. Having supported Lawson on tour before, this wasn’t the first the die-hard fans had seen Room 94, and it was more than clear from the reaction around the venue.

As the drums were slammed in a steady beat of anticipation behind the curtain, lights were going wild and cameras were out. Smashing straight into brand new single ‘Juliet’, Lawson all stood together on the drum platform next to Mr Adam Pitts, before making their way to the front of the stage. This uber Pop track, sitting at No.3 in the iTunes chart was played with pride across the venue as the fans gave every ounce of support they could to welcome their idols back to Dublin soil.

Obviously, a venue packed to the brim of girls taken into consideration- it’s not just the music creating a bright journey for Lawson- they sure do look the part.

The energy these four guys reflected off the stage through their catchy songwriting was pretty impressive to watch. Owning the stage with pure enjoyment had positive vibes flooding into the crowd. Their set list was varied with older tracks from the first album, but was also freshened up with plenty of new tracks from the album which was actually out that very day.

Time to tone things down a notch, frontman Andy Brown took his acoustic guitar while the other three fellow band members departed the stage. Settling in to what he described as “the most personal song I’ve ever written”, he poured honesty and emotion into the mellow ‘Girl I Knew’. Remaining on the acoustic platform, when the others returned, drummer Adam Pitts joined forces at the front of the stage with a few shakers. Proving that they don’t just perform and release energy as a band, but they have a musical flourish which can shine through their well-written songs.

Edging towards the end of the set, Andy got the camcorder. Keeping his vocals on track, he ran around the stage filming little snippets of each member, including some little “selfie” footage of himself! To put it lightly, the whole performance was fun, it was energetic and it was enthusiastic- the reaction to ‘When She Was Mine’ and final encore, ‘Standing In The Dark’ will tell you that, as well as Westlife’s Shane Filan’s look of approval… 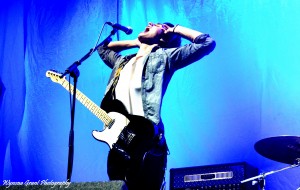 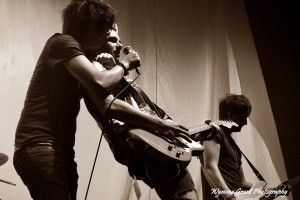 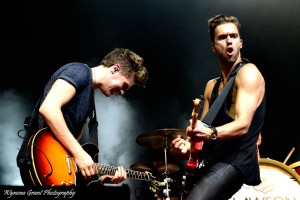