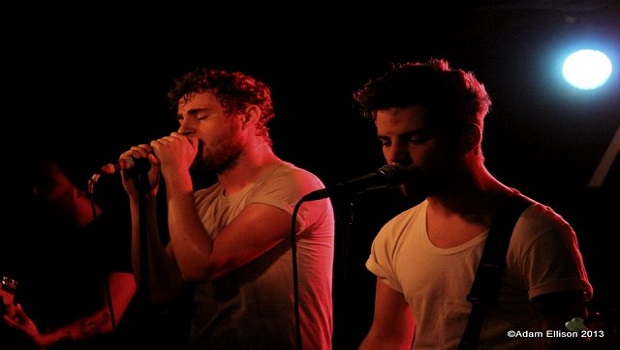 A change in record label, a transition in sound and a mere three years since their last appearance- Cardiff rockers, Kids In Glass Houses return to Dublin for the second last date of their ‘Peace’ tour…

Opening the show with the spirit to lure the scattered crowd towards the stage was Hertfordshire band, Tides. Belting out electrically energetic tracks with punchy riffs and melodies, these guys had the crowd moving instantly. With a tremendous stage presence to top it off, Tides really weren’t looking like a support act by any name- they were ready to steal the show. Executing tracks from their debut EP, they grasped quite a free, elasticated Indie quality with elevated Pop choruses.

Ready to bounce-back for their Irish fans, Kids In Glass Houses flew straight into their set in sync with the album running order, beginning with title track of the brand new album ‘Peace’. Maintaining the momentum, ‘Drive’ was next on the cards, followed by some older, more familiar tracks such as ‘The Best Is Yet To Come’ and the very suitable ‘Saturday’. Throughout the entire night as a whole, the set list showed a wonderful balance between new and old material.

Although it took frontman, Aled Phillips, a few songs to really get into the swing of things and reach the peak of his recognisable performance qualities, they came eventually… and it was worth the wait. Scratching the surface of a real oldie from their debut album ‘Smart Casual’, fans were treated to the Pop-Punk anthem ‘Easy Tiger’. The crowd size unfortunately fell short of expectations, but KIGH refused to be hindered and laid what lacked during their three years of silence, on the stage at this moment. Fans on their feet, hands in the air, and voices aching to be heard- KIGH were back.

Without the help from The Saturdays’ girl, Frankie, Aled took it upon himself to fire out both verses of ‘Undercover Lover’, dragging fans back into a reassuring memory lane of lyrics and sounds. In fact, the response and backing vocals from the crowd were so good that Aled couldn’t resist slipping a comment in… “you’re so good you could be Welsh!”

Drawing towards the end of this tiring yet refreshingly energetic set, the guys decided to give a little more. As ‘Youngblood’ was pumped out on the Pop-Punk platform of guitar riffs, Aled ordered the crowd to form a “choo choo train” and lead it around the venue (good man, Joe- excellent train driver!), while the song broke into a mist of instrumental noise. Clearly grateful to the fans for their continued support, the band showed their appreciation while finishing up with ‘Matters At All’- the final lines leaving this underground venue echoing with “goodnight..”

A performance which not only showed talent and well-written songs, but absolute experience. Kids In Glass Houses are back.

Kids in Glass Houses – Matters At All on MUZU.TV.