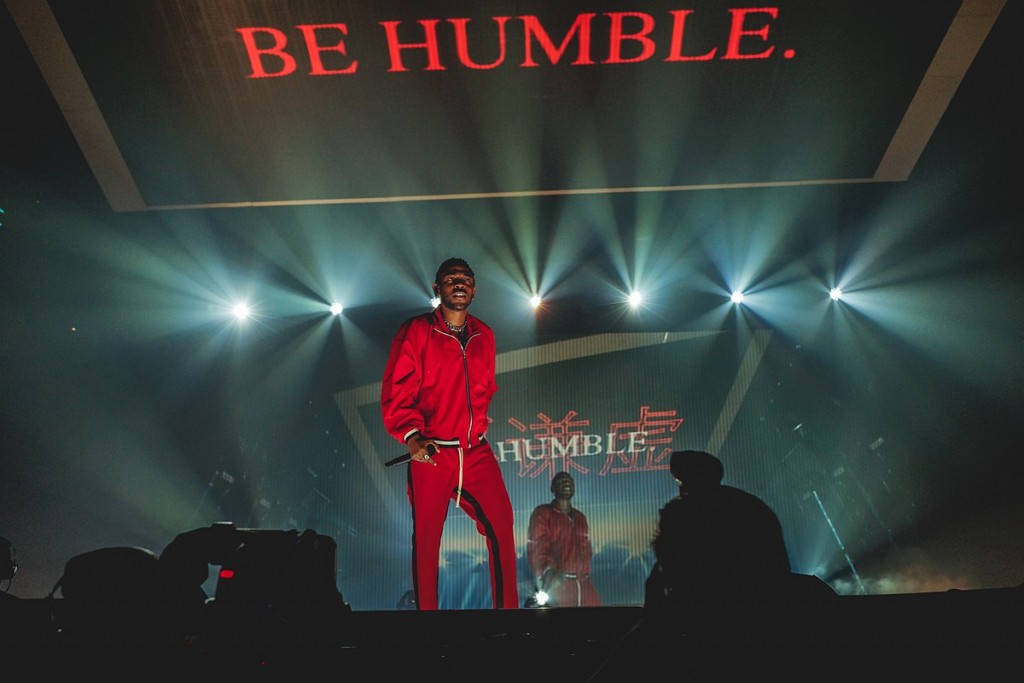 As a live performer, Kendrick continues to highlight his willingness to do things his own way, evidenced previously in the studio by his jump from tough, narrative focused hip hop on 2013’s ‘Good Kid, Maad City’ to the jazzy instrumentals and political poetry found on his 2015 record ‘To Pimp A Butterfly’ and now onto his current release, the sharply self-reflective ‘DAMN.’.

This self confidence and ambition is clear to see from the get go, even before he is on stage, as Lamar has chosen Mercury Prize winner James Blake as his opening act. Whilst it would have possibly been more accessible or predictable  for Kendrick to bring along one of his Top Dawg Entertainment label mates such as SZA or Schoolboy Q, Blake builds up a fantastic atmosphere playing a set of glitchy yet soulful and ambient electro with a blistering light show and whilst it may seem initially that they are musically worlds apart, there is something in the mood of Blake’s songs that bring him and Lamar together, as though Blake has built a musical foundation ready for Kendrick to bust through upon his arrival.

Following Blake, the first of a series of recurring films surrounding the ‘Legend of Kung Fu Kenny’ is shown. The humorous skits of Lamar in full 70s Kung Fu film mode are scattered throughout the night, giving Lamar chance to prepare for the next track, move around unnoticed or more likely with his level of energy; grab a short breather.

It being the ‘DAMN.’ Tour, it makes sense that the set list was heavy on songs from Lamar’s latest album, and it seems the audience have no bones about this. ‘ELEMENT.’, ‘LOYALTY.’ and ‘DNA.’ are highlights and Kendrick spends the night hearing his own words projected straight back at him, so strongly even that ‘HUMBLE.’ was performed twice; first acapella by the audience and then all over again with Kendrick and the backing track. But there were also enough dives into his back catalogue to appeal to the  veteran supporters. These were acknowledged by Kendrick as “the tests”, before setting the crowd of with exuberant renditions of ‘Swimming Pools (Drank)’, ‘Money Trees’, ‘Maad City’ and ‘Backseat Freestyle’ from ‘Good Kid, Maad City’. One could question how testing these ‘tests’ actually were, what with ‘GKMC’ being Kendrick’s breakout record and the songs performed being some of his most famous and so I felt a smidge of disappointment at not hearing Kendrick rip through ‘Ronald Reagan Era’ or ‘ADHD’ from his 2011 debut ‘Section 80’.

This feeling did not last long however, the sheer level of energy and charisma kendrick displayed throughout the evening was captivating and it was clear early on that this was not your average arena show, with Kendrick performing alone for the majority of the night (his only company being a recurring katana wielding dance/sparring partner) on a blank white canvas, the bright screen tilted above his head full of quick, vivid images and flashes of colour highlighting his every move.

One could ask the question whether the higher ticket prices for the show had put some people off, as there were some thin spots down on the standing space, though I feel it may have be more down to many ticket retailers apparently being sold out in minutes, only for them to reappear from ticket touts; a disappointing yet common experience of high demand concerts in 2018.   Not that this altered the mood of the show, the crowd were electric and just as Kendrick hoped they would, it seemed many of them really were having “the liveliest night of their mutha-f**kin lives!”.

Closing track ‘GOD.’ finished of a mesmerising night perfectly, the crowd swaying like an ocean of arms held high with illuminated smartphones, the standing disciples bustling and grasping towards Lamar, looking somewhat messianic himself, standing on the edge of the stage, eye to eye with his followers whilst the words “This what God feels like, laughing to the bank like ahaaa” echo around Manchester.