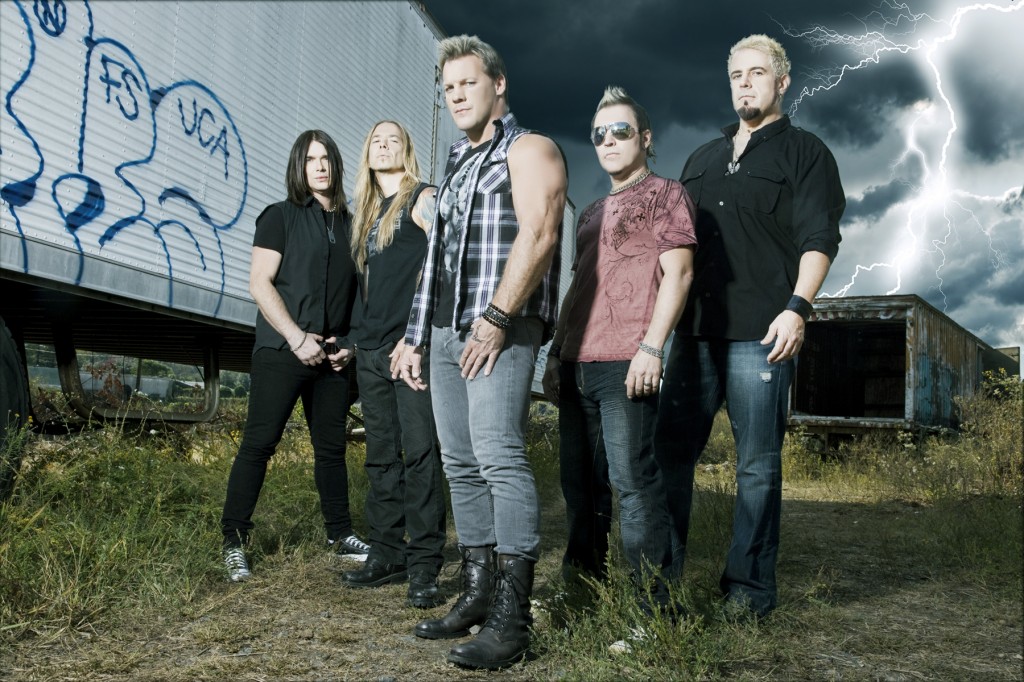 The tight, intimate and packed venue gave the whole gig a sort of punk-esque feel, and Fozzy's dedication to non-stop rocking contributed to that superbly.

Having just released their sixth album a little over half a year ago, Fozzy bring their Cinderblock Party tour to Ireland.

‘Do You Wanna Start a War’ was released in July 2014, and since then Fozzy’s Irish fans have been begging for the band to make a return. Announcing a show in Fibber Magees stirred up a bit of uncertainty, as the venue is notably smaller than the previous venues that Fozzy have performed in when in Dublin – but venue size doesn’t matter when it comes to these guys. They have built up a reputation for having an insane stage presence with unmatched energy, ultimately blowing the roof off nearly every building they play in.

The main tour support came from Welsh rockers The Dirty Youth, who had already built a respectable fan base in Dublin judging by the amount of t-shirts being worn into the gig. These are one of those bands that you’d hate to have to follow when playing a gig – they are seemingly flawless on stage. Front woman Donnie Monroe captured the attention of the audience from the moment the band took their places on stage to the moment they left, even inciting a venue-wide sing along for their catchy tune ‘Requiem for the Drunk’. If you’ve yet to hear The Dirty Youth, they’re well worth checking out.  We’ll be keeping an eye on these as they grow, and they’ll surely be welcomed back with open arms!

When it came time for Fozzy to take over the venue, the crowd was hyped. Chants broke out, songs were sung and adrenaline was pumping. The lights went out and the band burst into ‘Do You Wanna Start A War’, the title track from the new record. Instantly, everyone in the room belted out the lyrics in unison with front man Chris Jericho.

With a setlist packed full of great tunes from the Fozzy catalogue, including ‘Lights Go Out’, ‘God Pounds His Nails’ and ‘One Crazed Anarchist’, there was little the band could do wrong. Every song ignited a bigger fire under the audience, as they only got louder as the show rolled on. ‘Died With You’ was one of the stand-out songs of the show, as it truly showcased how far Jericho has come as a vocalist. He’s never sounded better on stage! ‘SOS’ by ABBA is apparently a welcome addition to any metal gig, and Fozzy’s got you covered.

When it comes to raw energy and passion, nobody does it better than Rich Ward and Billy Grey on guitar. These two jump, twist and kick their way around stages worldwide and genuinely seem to have a blast doing it! These guys are an absolute joy to watch in a live setting, making Fozzy’s insanely badass riffs seem almost easy to play as they bounce about.

Filling in for Fozzy’s bassist Jeff Rouse was Stuck Mojo’s Corey Lowery. For someone who isn’t a full time member of Fozzy, he could’ve fooled you. He looked completely comfortable playing every song, and managed to assist the other band members in pumping up the crowd even more with his energetic style.

The final two songs came after a mock-encore, where the band never left the stage but requested the crowd chanted for them as though they had. Following some thank yous to the audience, Rich Ward began the intro to ‘Sandpaper’, a song originally recorded with Avenged Sevenfold’s M. Shadows. Perhaps one of their bigger hits, this was one of the most well-received tunes by the crowd of the night. Ending with a Krokus cover was an odd choice, but over the years Fozzy have made ‘Eat The Rich’ a staple of their live setlist, and the near-perfection with which they play it  makes it clear as to why.

Maybe it was just the smaller venue, but crowd participation on the night was the best I’ve ever witnessed for a Dublin Fozzy show. It’s always great to see a band of this caliber grow, and there is no band that deserves it more right now than these guys.

The tight, intimate and packed venue gave the whole gig a sort of punk-esque feel, and Fozzy’s dedication to non-stop rocking contributed to that superbly. Possibly the best show Fozzy have played in Ireland to date, and if it’s anything like the remainder of their tour – I can’t urge you enough to buy a ticket and see these guys on a stage near you.