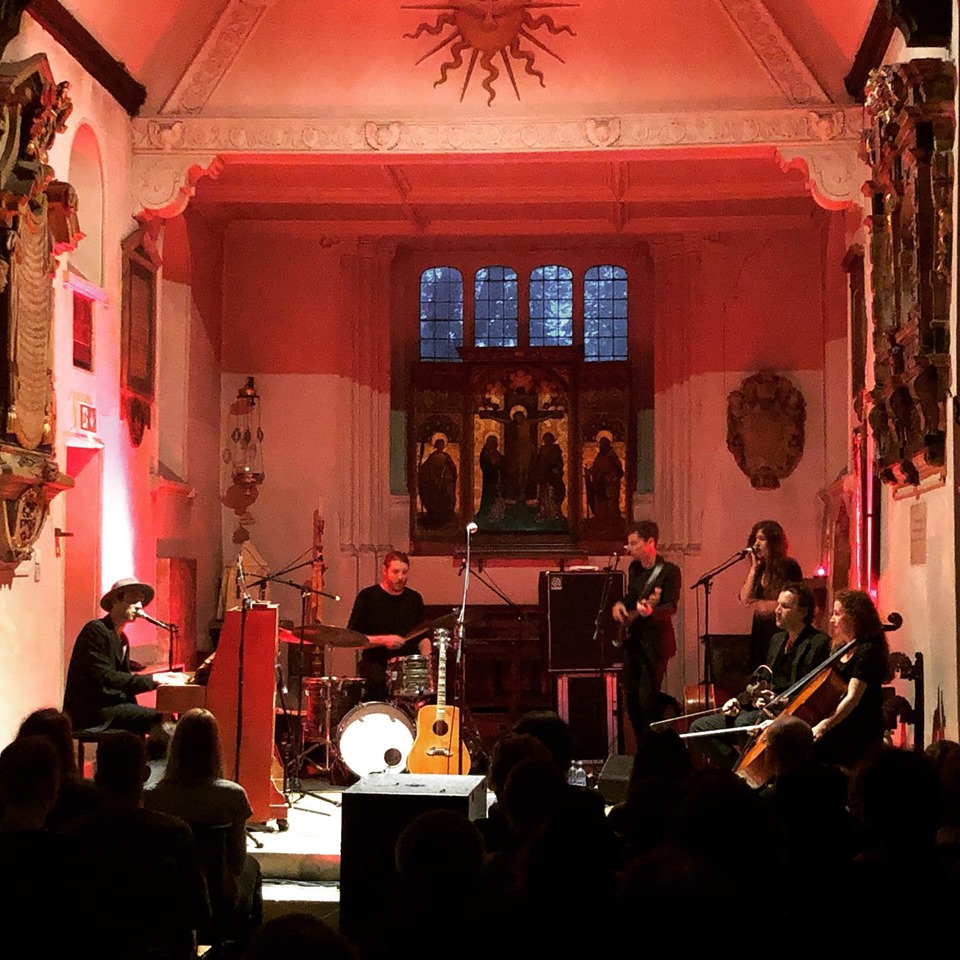 The intimate St Pancras Old Church was the setting for a stunning evening of live music by Finn Andrews. The Veils frontman recently released his debut solo album One Piece At A Time and this gig was a chance for him to showcase his new tracks as well as a few of favourites from The Veils.

He opened with Love, What Can I Do?, the opening track from One Piece At A Time, which is melancholy and slightly haunting in its rawness. It was a powerful opening, just Andrews and the piano, before percussion and strings gently swept in, echoing around the church. This was followed by Spirit In The Flame, another intense track from Andrews’ album, where the strings add a breath-taking dimension to his powerful lyrics. The gorgeous harmonies of Andrews’ backing singers really came alive on Stairs To The Roof.

The set was peppered with The Veils’ tracks such as the deep, brooding Swimming With The Crocodiles with its rocky undertones and the incredible The Birds. This was a personal stand-out of the evening with the thrashing guitars that grow in intensity, with Andrews taking to the guitar for an epic solo. This visit to the classic Veils material was followed by a return to Andrews’ new tracks with the bubbly A Shot Through The Heart (And Down In Flames), all perky strings and addictive hooks. Next track Don’t Close Your Eyes was a downtempo ode and beautifully atmospheric in the stunning church setting.

Andrews showcased a softer side to his vocal with Rise And Fall where his vocals became deep and brooding and intermittently stepping back to allow the beauty of the strings to take centre stage. The gentle tones continued with Hollywood Forever and One Piece At A Time, notable for the hunting melodies and stripped-back tones.

The contrast between Andrews’ solo material and that of The Veils couldn’t be starker when the pace was turned up by Not Yet, a frantic, country-esque track where he lets loose on the guitar and lets his vocal run wild and Axolotl, an intense, raw offering with eye-opening lyrics such as “Salvation’s more than I can afford, who needs the Devil when I’ve got the Lord?”

The dark yet invigorating One By The Venom was a fitting final track, Andrews’ intensity and brilliant storytelling ability made every word come alive. As Andrews narrated all the ways that the people in the tale had met their demise they were punctuated with in bold clashes of the piano keys and jarring strings and this built and intensified until the track met its climatic end. One By The Venom is an undoubted stand-out on Andrews’ debut album and hearing it live with every final word punctuated so solidly makes it even more immense. Andrews vacated the stage to a standing ovation, returning to play some classic Veils tracks stripped-back and re-worked for the intimate setting.

To watch such an accomplished musician in as small a venue as St Pancras Old Church made it such a memorable experience and I loved how he seamlessly blended old tracks with new and heavier sounds with softer ones. I’m looking forward to hearing the next piece of Finn Andrew’s solo journey.

Have a listen to geniously-crafted lyrics of One By The Venom below and find out more about Finn Andrews here. His debut solo album One Piece At A Time is out now.