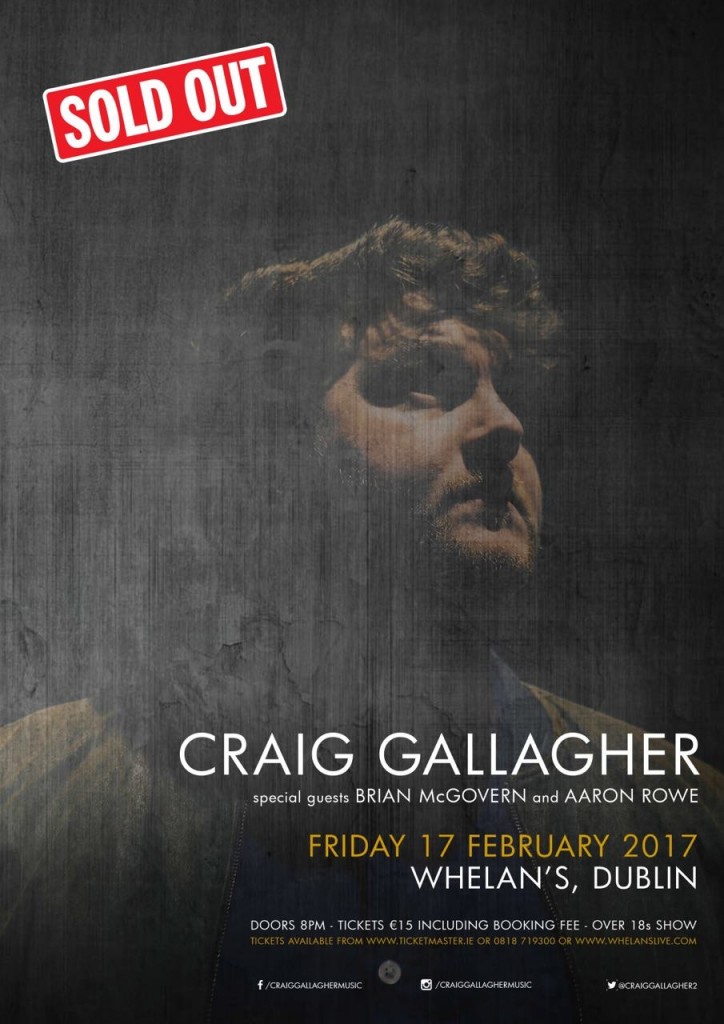 An intimate performance by one of Ireland's best kept musical secrets. It is an absolute treat to see Craig Gallagher on a live stage.

Nearly a year after rising Irish singer-songwriter Craig Gallagher performed a show in a sold out Whelans, he returns to the venue to play another stellar set.

For someone who’s been fairly popular on the Irish music scene for quite a while, it’s baffling to think that Craig Gallagher has yet to release a full-length album for his fans. This hasn’t deterred them, though, as last night a once-again sold out Whelans played host to nearly 500 audience members taking in a wonderful show from Mr. Gallagher.

The night kicked off with a promising young talent by the name of Aaron Rowe, who played  a short, passionate and soulful set which definitely captivated the room, which was then capitalised on by the popular Brian McGovern. McGovern has a slight country flair in his take on songwriting, and it really sets him apart from the countless other rising singers in the country. Both support acts performed thoroughly enjoyable sets, and are definitely ones to keep an eye on going forward.

Craig Gallagher took to the stage shortly after the support acts departed it. Met with a roaring applause, he wasted little time in launching into his setlist, which was loaded with fan favourites such as ‘OK’, ‘Back To The Start’ and ‘Without You’. Rounding out the initial part of his set was a spectacular cover of Elvis Presley’s ‘Can’t Help Falling In Love’, which was a particular highlight of the night.

Craig’s on-stage presence is reminiscent of Ed Sheeran minus the energy. What he lacks in that department he more than makes up for it in being a relatable and an insanely likeable individual, making his live shows feel more intimate than your average acoustic guitar wielding singer-songwriter. His sweet voice is the perfect partner to his simple, yet effective, guitar work, sounding even better in a live set up than when compared to one of his few studio recordings available to the public.

As the night came to a close, Gallagher performed a cover of Nizlopi’s hit, ‘JCB’, which was then followed the equally interactive ‘Yellow’, a song originally by Coldplay. While one may argue it’s an odd decision to pack both of these cover songs in the middle of an encore set, it certainly didn’t bother the crowd, who rejoiced in belting out the lyrics to both tunes right back at the stage.

After last night’s performance, it’s pretty clear that if he plays his cards right, Craig Gallagher could quickly become a staple of the diverse Irish music scene. 2017 has just begun, and if this concert was anything to go by – this is Craig’s year to shine.