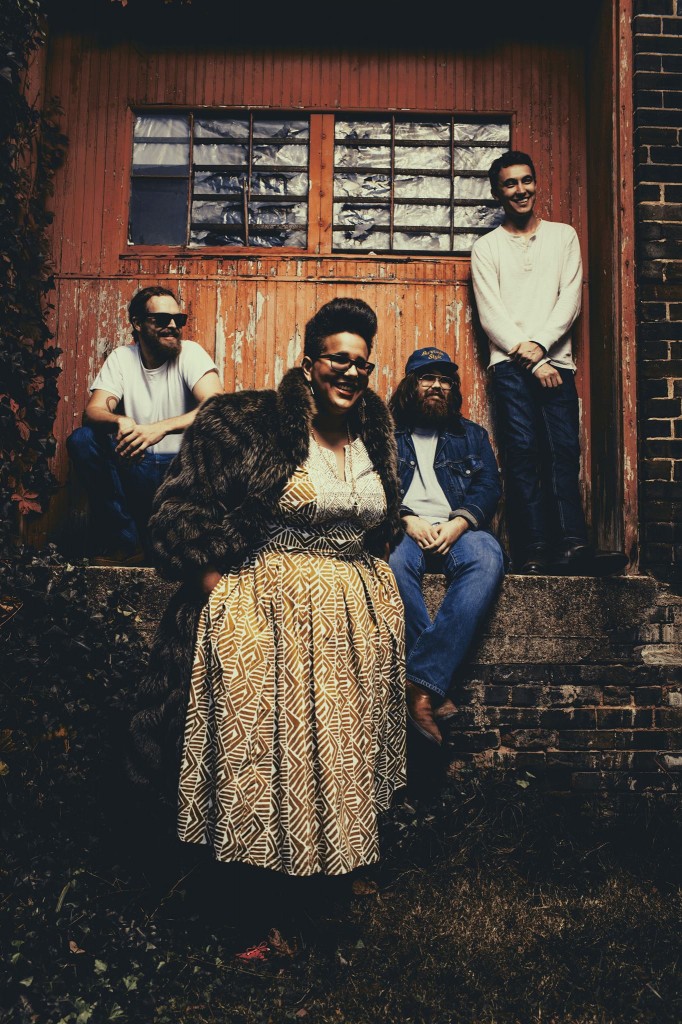 Alabama Shakes return to the UK, and this time with a wealth of new material to enthrall their audience.

It’s a somewhat damp Thursday 17th February night at the Islington Assembly Hall, as a sold-out crowd descends upon the venue to witness one of the most exciting young bands in recent years. The last show for Alabama Shakes in Europe before returning to the States, and with their much-anticpated second album Sound & Colour due to be released in April, the anticipation amongst those present in palpable.

Arriving at the Assembly Hall is a grand affair, as the mirror ball illuminates the domed ceiling and cascades down onto the stage. There is no support as such, with the Rough Trade DJs supplying the finest in classic rock n’ roll, r&b and soul as the audience gathers. In someways it is the perfect soundtrack, as it goes to show how much of this musical heritage was part of the sound that was Alabama Shakes’ fantastic debut, Boys & Girls.

Finally, to rapturous applause, the band take to the stage. The first thing to hit home is just how much Alabama Shakes has grown since their debut. The core of Brittany Howard (lead vocals, guitar), Heath Fogg (lead guitar), Zac Cockrell (bass), Steve Johnson (drums) and Ben Tanner (keys, percussion) are of course all present, but now they are joined by a further man on the ivories as well as a trio of backing singers. The lineup works solidly in favour and demonstrates that the band are definitely evolving, although thankfully without compromising their original sound.

The choice of material is a brave one, as over the half the songs performed are from their upcoming album. It is a strategy that seems to go over the head of a handful of the more casual fans, but for the rest, the music speaks for itself. The new material fits in perfectly with the more familiar songs without for a moment slipping into the trap of attempting to recreate past glories. While many are within the territory of classic, heart-wrenching soul, new genres are embraced as elements of funk, straight up rock and even punk shine through. Two previously released new tracks are featured in form of Future People and I Don’t Wanna Fight No More, while Always Alright from the 2012 film Silver Linings Playbook also features.

The chemistry of the band is nothing short of astounding, with all of the instrumentalists working together to create the perfect wall of sound without ever trying to outshine one another. Brittany Howard, of course, steals centre stage and is a striking presence. Almost never seen without her signature SG in hand, she belts out tones so emotional, pitch-perfect and expressive whilst at the same time somehow making the whole task seems effortless. Moreover, she comes across as so charismatic, humble and appreciative of her audience that she never strays too far down the diva route. Perhaps a little excessively, the band choose to stop between each song in order to tune up. This mostly goes past without too much trouble, but during the rare moments where Howard doesn’t engage the audience in a little sassy banter, the flow does feel disrupted.

However, all is forgotten once the fan favourites return to the fray. Rise To The Sun, Heartbreaker and Hang Loose all make appearances during the first part of Alabama Shakes’ set, but perhaps the highlight of the evening comes with a fantastic rendition of Be Mine. Howard, guitar-less this time, puts every ounce of herself into her performance, from the attitude-laden yet heartfelt verses to the banshee holler of the songs crescendo. The band as a whole really do themselves justice here, with Fogg’s delicate yet gutsy guitar lines and Cockrell’s solid no-frills bass-playing not only being terrific showpieces for the song but the whole set. A short interval follows, with Alabama Shakes soon returning for one last showdown. They begin again with a new song, Over My Head, set to be the closing track of Sound & Colour. A driving version of On Your Way followed by You Ain’t Alone finishes the set, with the latter’s closing refrain drifting up gently from the crowd members as the band bid their farewells and disappear off stage. What each and every audience member has witnessed is going to stay with them for a long time. It’s an exciting transitional period for Alabama Shakes as their musical evolution and raw energy carries them from the being next-big-things to international recognition, and everyone in attendance is going to consider themselves lucky to have been along for the ride.

Alabama Shakes’ new album, Sound & Colour, is due to be released in the UK on 20th April.

Alabama Shakes – Hold On on MUZU.TV.