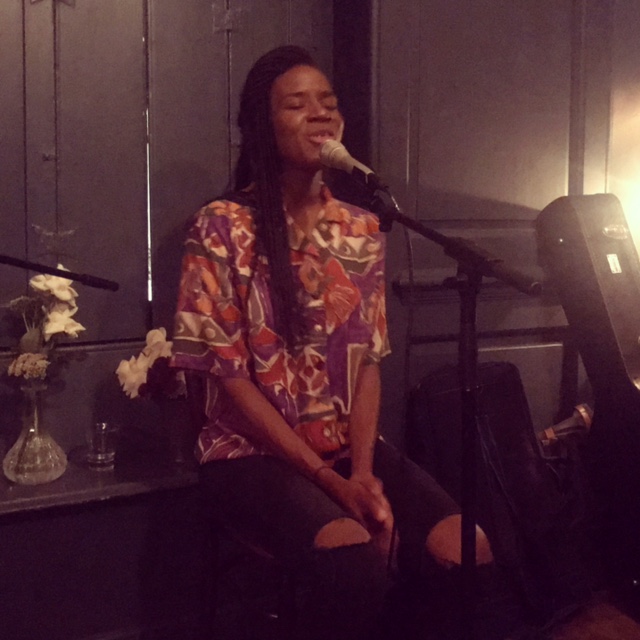 New York singer-songwriter Aisha Badru performed an intimate gig at Soho private members club Blacks last Monday.  A sizable crowd had gathered for the one-off gig which was held in a cosy space akin to a snug living room, with further listeners spilling out into the hallway behind. The strong turnout was to be expected as Aisha Badru posses a rare lyrical and vocal talent and her songs are sung from the heart.

Badru opened with Waiting Around, a moving track where she sings of waiting for someone who she loves while the rest of the world carries on around her. Badru’s vocal is so unique and this track set the tone for the rest of the set, having the crowd in captivated silence.

Between tracks Badru spoke of the friendships, relationships and experiences that formed the inspiration for her songs. One such track that was borne from a tough personal experience was Just Visiting. It’s an atmospheric track where Badru sings of feeling like only a visitor in the home of someone who wasn’t treating her as anything more than that.

All the songs in the set were stripped back to their bare bones, just Badru’s gorgeous vocal accompanied by keys. Fossil Fuels has an urban edge wit electronic elements and drum pad beats so it was refreshing to hear such a pared-back incarnation.

A highlight of the evening was the stunning Happy Pretending with its heart-wrenching lyrics “Do i ever cross your mind? I think about it every once in a while.” I doubt there was anyone in the room who didn’t have goosebumps.

We were also treated to the haunting Splintered with its hard-hitting lyrics “How many of us die and pretend to live?” It makes you think about the role you’re playing in the grand scheme of things and how we must live our lives to the fullest.

Aisha Badru can envelope the listener in her songs can take you on a journey through her experiences with her lyrics.

Find out more about Aisha Badru here and have a listen to Splintered below.