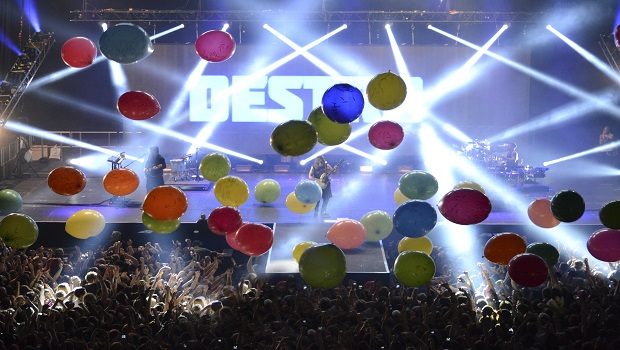 Satisfying the high expectations with their latest album, ‘Love Lust Faith + Dreams’, Thirty Seconds To Mars embarked on a headline tour across the UK and Ireland, accompanied by the well-received, very special guests, You Me At Six.

A built up atmosphere shadowed each entrance of the 02 Arena, Dublin, all equally eager for the comeback of UK rockers, You Me At Six, as for the famous live presence of the headliners.

Now, don’t get me wrong, let by-gones be by-gones and what not, but… last time Thirty Seconds To Mars graced Dublin, how late did they casually arrive on stage? Let’s round it to an hour- about right! Well, well, well; talk about contrasting norms. Bang on 7:30, You Me At Six striked the stage. You could have set your watch by their timing.

Hitting into their set with a full-blown lighting plaza, You Me At Six kicked off with ‘Reckless’ (yes, with an R- a capital one at that). This powerful opening led them on a straight path of their latest album, ‘Sinners Never Sleep’, with the upbeat anthem, ‘Loverboy’ next on the cards.

Apologies for the lack of spark for almost two years was quickly matched by a cheer to their album announcement. ‘Cavalier Youth’ is quite an exciting gateway to look through after such a massive break. But January can wait; back to the 02!

Taking the tone down a notch to arguably one of the most well-written You Me At Six songs of all time, ‘Crash’. Phones, cameras and lighters in the air, the only words suitable in frontman, Josh Franceschi’s mind, “well, doesn’t Dublin look stunning”. The emotion, passion and sheer calming energy that went into this song was merely mesmerizing. I’ll be honest; nostalgia crept up of their first ever Dublin show in the intimate venue of Whelans back in 2007- what a well deserved journey these guys have travelled.

Following a new track, ‘Lived A Lie’, from the forthcoming ‘Cavalier Youth’, Josh introduced ‘Hold Me Down’ anthem ‘Stay With Me’ with a heartfelt “Ladies and Gentlemen, this song goes out to Lisa, who is no longer with us”- a tribute to a You Me At Six fan who tragically took her own life only last week.

Before departing the stage, the guys raised the tempo with the more heavy ‘Bite My Tongue’ and the Pop-structured ‘Underdog’, to which the crowd went wild. Josh, you speak the words, they react… clearly. “If you’re not having fun at a You Me At Six and Thirty Seconds To Mars show, you might as well give up on music”…

OK, let’s get to the punchline, shall we? Yeah, Thirty Seconds To Mars probably deserve a look in here…

Proving their ability at other points of the spectrum, not just releases, the trio of the night made an entrance. Jared Leto aesthetically descended upon the stage to a steady drum beat met with screams upon screams.

Strutting a Nirvana vest top, Jared and Co. laid into ‘Search And Destroy’. Urging the chillaxed balcony members to get on their feet with lines as forceful as “This is my show, we go by my rules”- take that, security. Now, to be fair, the next sight was a bit beautiful. Understatement of the year. Just look at this review’s photo; I’m pretty sure it tells this entire story itself. A mass amount of balloons of all colours, sending every individual back to six years of age was quickly followed by thundering confetti. I think the realisation of “oh, we’re at a Thirty Seconds To Mars show” had just sunk in.

Creating memories fans will cherish for life, Jared invited members of the crowd to join him on stage. Delving into ‘Do Or Die’, the fans moved towards the back of the stage, not to hinder these guys’ energy. Clearly a favourite amongst fans, the final lines of this song were drowned out by 20,000 people singing in sync.

Granting a short interval of sorts for performance gymnasts to spice things up again- a sort of refreshment if you will, and then came ‘City Of Angels’, the track most well known for it’s critically acclaimed recent music video. If you have 11 minutes to spare, I suggest you go check it out. In fact, I’ll make it easy for you at the end of this review, because, we figure that an extra minute to search for it might be pushing it…

It was about time some oldies were played on this 02 Arena stage. So, ‘The Kill’ it was. But, a beautifully stripped back version comprising of Jared Leto and an acoustic guitar. Absolutely fantastic.

Sticking with the older hits, the guys progressed into the final two songs of the set- ‘Closer To The Edge’- with which “NO NO NO NO” became a chant amongst the crowd, and ‘Kings And Queens’.

Returning for their encore, Jared, Shannon and Tomo gathered in the centre of the runway before performing a song from the new album, which they had never played live before. Closing on the relatively new-ish ‘Up In The Air’, a crowd of approximately 30 fans were hoisted onto the stage, and joined in for the last three minutes of this wonderfully performed gig.

A wonderful sense of interaction and an overall lack of division between the stars of the night and the die-hard fans was captured in every light of the performance. A stunning performance from these arena-fillers on the second last date of the tour.

I’ll put it this way- if you’re not a fan of Thirty Seconds To Mars’ music, you still could have enjoyed this Monday night at the 02 Arena, for the slick showmanship, if nothing else- and that is not something everyone can pull off.

As promised, ‘City Of Angels’:

THIRTY SECONDS TO MARS – City Of Angels on MUZU.TV.