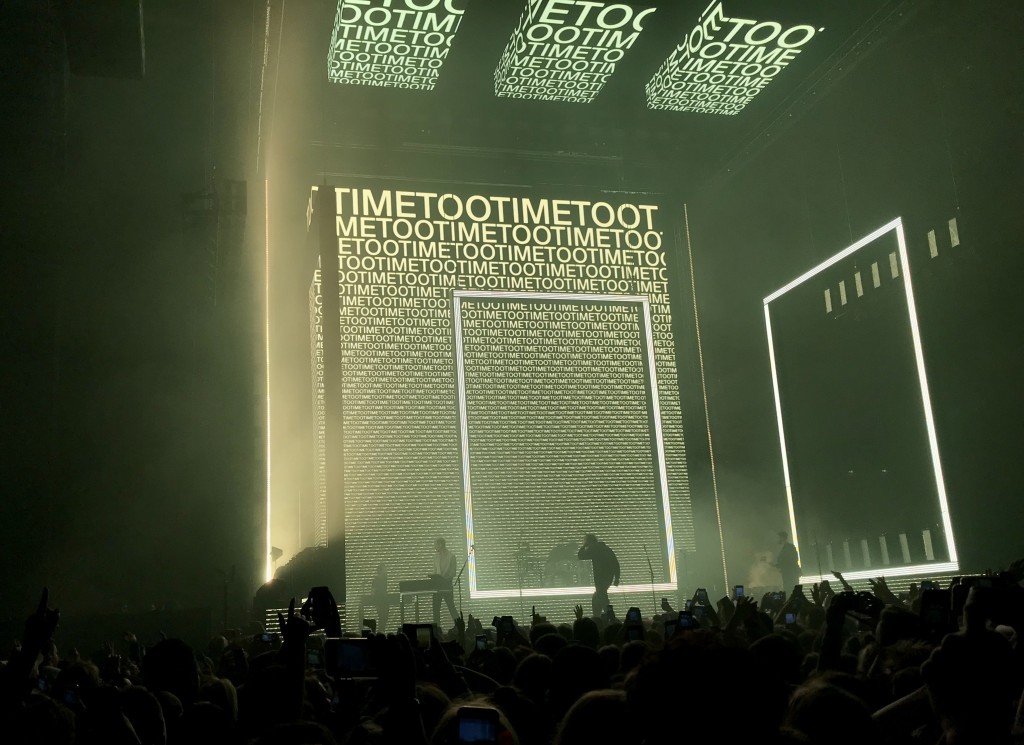 The 1975 close their UK tour with an electric finale in Sheffield, unifying the masses through ambitious yet emotive pop-rock

“Welcome to the show everybody” announced Matty Healy, the frontman of indie-pop goliaths The 1975, just after performing “Sincerity is Scary” which saw him playfully hopping and strolling along a travelator in front of a towering image of a sunny New York style terrace block; a show absolutely.

It consists of imposing light boxes hanging from the ceiling, dizzying technicolour screens flashing to the beat of soft synths and funk-rock guitars and the biggest pop band in the country performing the last date of their UK tour with no visible fatigue. All this is preceded by supporting performances from No Rome (featured in Fortitude’s 10 to watch in 2019 list) and Pale Waves, who both warm the crowd nicely with fusions of contemporary RnB, art-pop and indie rock.

The atmosphere outside the arena edged towards pandemonium as the sound of No Rome became audible through the arena walls, as the queues to enter seemingly have no end and no beginning, where countless teenagers are huddled together in the cold anxiously awaiting to gain entry.

It has often been easy to poke fun at the band, whether for their arguably pretentious song titles cough* I Like It When You Sleep, For You Are So Beautiful Yet So Unaware Of It cough*, Healy’s arrogance in the media, and the band’s pop appeal resulting in a primarily young fanbase. However, it is clear that here in Sheffield it all makes complete sense to the 13,000 or so fans watching mouths agape with arms thrown to the sky. This band is theirs, and the angst, fear and alienation projected in their music echoes how past generations felt about groups like The Smiths, or Talking Heads in their splashing together of genre and the desire to craft a truly impressive live experience.

Healy can surely now be confirmed as one of modern pop’s premier frontmen, he is charismatic and charmingly goofy, dressed in bold blue overalls striking against his bandmates smart shirts. He chats briefly between tracks, thanking the staging crew as well as the audience and at one point blasts two lads for scrapping in the seats. He leads the band through an excellently performed mammoth 24 song, kicking off with the bouncier, funkier tracks “Give Yourself a Try”, “Love Me”, “TOOTIMETOOTIMETOOTIME”, and then steadying things in the middle portion of the evening with mellower cuts “Loving Someone”, “A Change of Heart”, “How to Draw/Petrichor”, “Medicine”.  The final third of the evening is more “hit” heavy, though what constitutes as a “hit” and what doesn’t is difficult to determine in this devoted crowd, and “Love It If We Made It” “Girls” “The Sound” and “Sex” close the evening out.

The 1975 are sound tracking the joy and angst of youth here on a blockbuster budget, I have not seen such a live spectacle since David Byrne performed his American Utopia show last year, and there definitely moments here that match the magic of that performance, such as during “The Ballad of Me and My Brain” where Healy pushes the back wall of the stage in and climbs inside, appearing to perform the song from inside of a giant iPhone, the glowing rainbow cloud backdrop shimmering out across the crowd on “Loving Someone” or the heart-breaking “Somebody Else” which sees Healy return to the cut out in the stage wall and become framed by endless mirrored images of his neon lit image.

There a few acts in pop music that are utilising spaces such as this as brilliantly as The 1975; they are undoubtedly one of the best “big” live bands in the world.