Interview: The Blackout – Y Not Festival 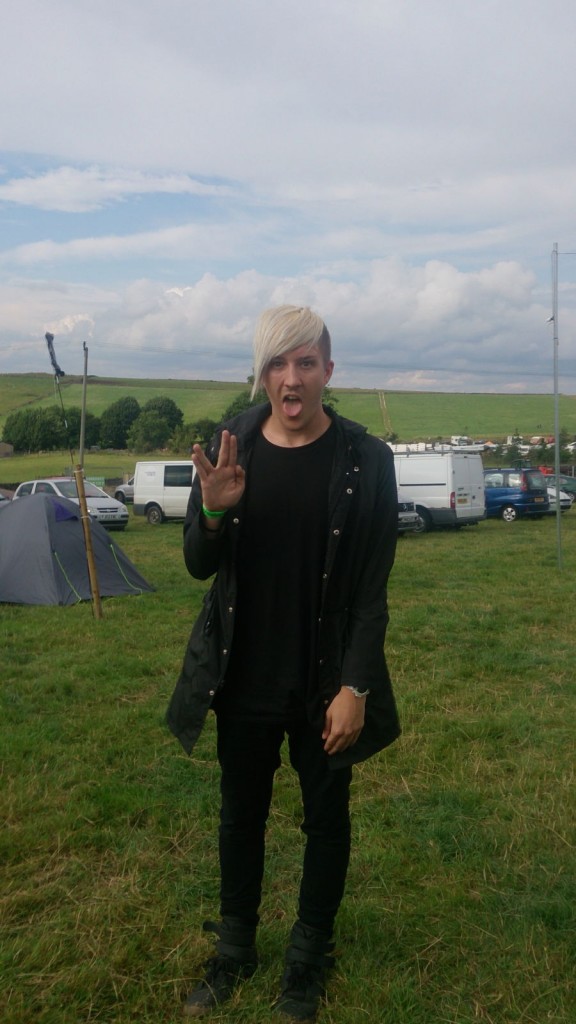 Welsh post-hardcore outfit The Blackout are set to return later in the year with a new EP and tour. The band came together with a mutual respect and admiration for bands like Taking Back Sunday and Limp Bizkit.
Whilst covering Y Not Festival, we caught up with Sean Smith (lead vocalist) and asked him a few pertinent questions.

This all happened in our humble camping tent. Our two chairs faced outwards looking out towards the Derbyshire countryside – so Rock’n’Roll..

To kick things off, you’re set to headline The Giant Squid stage tonight. What can the crowd expect? Will here be any new material from your upcoming EP?

There won’t be any new material from the new EP, because we don’t want crappy YouTube videos of the new stuff up. We’d rather the music come out and people hear it properly, rather than people hearing “SWSWSWSHUHWUHWUSHWSHUWHSSHHHWWWW”. The crowd can expect lots of interaction, and on one song we’ll ask the crowd to kneel down and go mad. I’ll also be getting in the crowd and stuff. And some guy dared me to kiss him earlier, so that’ll probably happen at some point.

For readers who aren’t aware, are you okay to talk a bit about the roller-coaster of the last few years?
We got to our peak where we headlined Camden Roundhouse after our album ‘Hope’ came out. Then we worked on ‘Start The Party’. I was enjoying partying a lot and I thought the people who liked our band would be maturing to that age of drinking and partying a lot. But apparently I was wrong, they’ll all miserable goths.

The other band members also started to grow up. I thought what would Sean do? No Sean wouldn’t want a baby. Sean wouldn’t get married, Sean would have a laugh. But no, apparently they wanted to do serious life stuff, and the promotion of the album suffered. So then we had a short break and left our management who said we owed no one anything. Then a week later the label said we owed them thousands of pounds. With no shows lined-up we just didn’t know what to do.

So it was a scary time for the band?
Yeah, we thought how are we going to make money. But in the end we paid them back after doing loads of shows.

Fortitude staff and readers are very keen to know what sound and style you’ll bring to the new EP. Can you shed any light on it?
The new EP Wolves will have a certain bitterness to it. With everything that has happened we just wanted to be honest about the way we have felt, and this will come through in the tracks.
I’m just buzzing about how the EP has turned out and I can’t wait for people to hear it. I really can’t. I have so much confidence in it.

How many tracks will be on the EP?
Five.

Plans for next year?
Well I’m the youngest in the band at 30 and everyone is growing up now and looking for new careers. So this EP and potential album could be our last. I just don’t really know what the plans are, just have to see.

Thanks for the chat Sean!

Watch the official video for Higher and Higher by The Blackout below.

The Blackout – Higher and Higher on MUZU.TV.