Interview: The Riptide Movement – “If you like what you do you’re going to find a way of making a living out of it” 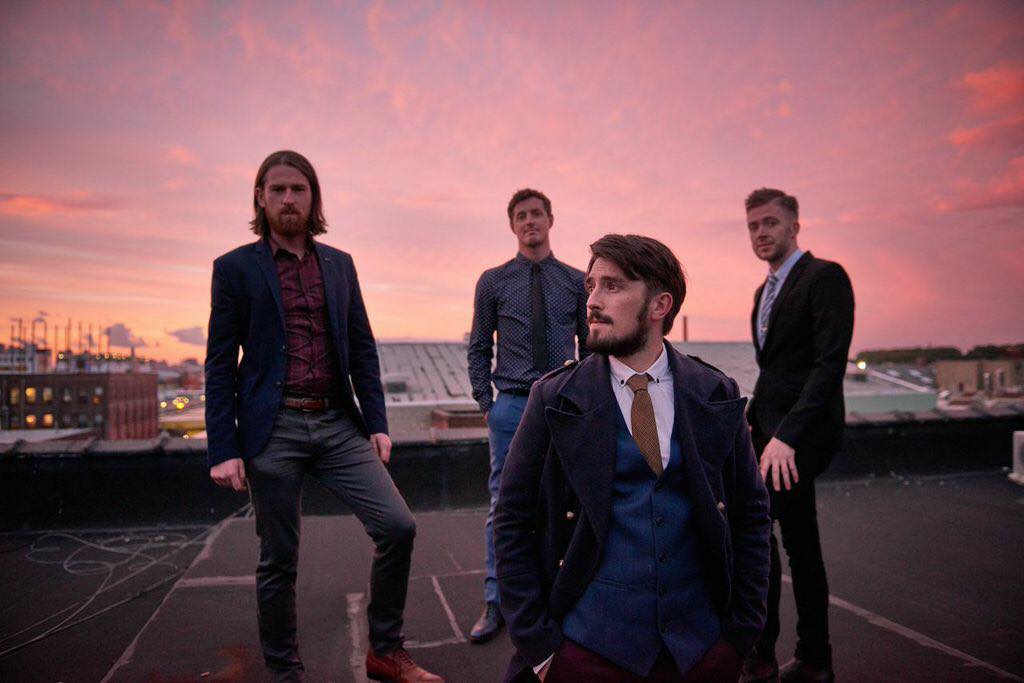 The Riptide Movement have had a hell of a year in their native Ireland; after a number 1 album and being nominated for the Meteor Choice Prize, the Lucan four piece are ready to assume their place in the British charts with the UK release of their upcoming single ‘All Works Out’.

We caught up with the supremely talented lead singer and lyricist of The Riptide Movement, Mal Tuohy.

Thematically, what is Getting Through about?

I suppose it’s about family and friends. It’s about the band’s journey thus far. Lyrically, it’s how I perceived the world back when it was written in 2013. I suppose the kind of mood as I seen it in the country in Ireland. Some songs touch on immigration like ‘Glór’ and ‘Across the Water’.

Lyrically the album is quite observational and poetic in some ways, how did you approach that musically?

Honestly I think I had a few ideas for the songs and what I wanted to say. Our producer Ted Hutt came on board. I suppose lyrically it wouldn’t be as personal and deep – I think Ted tapped into that and sometimes it felt like I was a kid going to the teacher with my homework with the lyrics and he’d say ‘I like this and I like that but I think you can do better on this.’ If anything I really had a lot of time by myself when we were doing the album and really focused on what I wanted to say.

With the other members of the band how did you come together with the music?

We were in Germany at the end of 2012. We rented a house in Winterberg –  the lady that rented us the house let us play ’til all hours of night – so we were playing ’til four or five in the morning having a few beers. So most the album was written then in Germany with the music and ideas. Then when we got home we done a few more demos, we got Ted Hutt on board and we done a bit of pre production, took the songs apart, moved them around and put them back together again. The songs were written as we were recording.

…you can kill it, yeah, I’d agree with that…

…Yeah, I think so because you have the ideas alright. I always have my phone with me, but you can pick up the guitar and be messing around and record a bit and come back the next day and say that’s really cool with hundreds of different ideas. Then when you get in a room with the four of us and this idea, you start jamming it out – you might have a verse or a chorus or the full song, then again you might just have a melody and then it’s a group thing from there.

Is there a lot of improvisation or do you follow a structure?

I try not to; I try to keep it as unrestrictive as possible, it might sound crazy but it works. Even when you’re doing melodies and stuff there are certain words in that initial idea of when you record it on your iPhone where there could be a verse or a chorus, that it’s the way a word is sang in the melody where there’s an emotion there in that word and you can hear it. You listen back the next day, don’t get me wrong a lot of the stuff is crap, but there’s an emotion there and you can hear it and the idea is there and you know what it’s supposed to be about.

Within the music do you try to do a call and response with melodic lines followed by the guitar?

Yeah I think that’s nice. I like the idea of even with guitar solos following the melody lines because personally I love melodies. That’s what we’re going to be bringing in more of on the next album – I’d like to have hooks behind hooks if you know what I mean.

What would you say your influences are?

Do you think you’ve got any sounds from when you were growing up?

Definitely, there would have been a lot of American music played in my house from my parents like Bob Dylan, also The Rolling Stones and The Kinks -English Blues music and American music like The Doors. I have two older brothers and one of them was a big Cure fan so that used to be on a lot in the house. I used to love Oasis, I still do. All that kind of stuff, it was a bit mixed.

Do you have a particular sound that your fans can recognise?

…It’s got a very Springsteen-esque sound…

…Yeah we like Bruce Springsteen as well. Actually Gaslight Anthem has a Springsteen-esque sound and their producer is the same as ours –Ted Hutt.

What was it like working with your producer, Ted Hutt?

Brilliant, it was a whole new experience because as I say we produced our last albums ourselves. The thing about producing your own album is that, I suppose you’re setting your own bars so you might get lazy with a line even though you don’t think you are being lazy. But with Ted it was like ‘No that shouldn’t be there it doesn’t make sense’, he’d really push you – he pushes you to your limits ‘til you’re about to break but he knows how far to push. It’s great because he gets the best out of you. It’s intense.

There’s been such a good response back home in Ireland – the Meteor Choice nomination, signed by Universal Records Ireland, how does that feel because you started out busking, right?

Yeah that’s right. We were a DIY band doing everything ourselves. It’s actually gas because with the busking we were gigging before we were busking, which is mad – we always seem to do things in mad ways. The reason we went busking was because when we brought out our first album, What About the Tip Jars?, people didn’t have a clue who we were, the radio wouldn’t play it and we couldn’t get anyone to write about us or anything like that. So one day we seen these guys playing on Grafton Street with amps and they were selling a few CDs, we thought this would be a great way for us to sell CDs so we got a car battery hooked up to a few small amps and we would be banging out the tunes, and we used to sell about a hundred albums when we started on Grafton Street and out of that we got gigs in Russia, India and Czech Republic – mad places! Busking was a great part of it and financed our second album, so it kind of kept us going. So we’d busk on a Saturday, we’d get a spot at six in the morning because there was real competition – there’s only two spots you can play on Grafton Street with a band so we’d get the spot at six and start playing at twelve, finish at two and hopefully sell a hundred albums within those two hours. We’d jump back into the van and be off to Cork or Galway to do a gig. That’s the way we used to do it, even when we were playing Oxygen or Electric Picnic, so we played Oxygen on the Friday night to about 8,000 people in our tent and it was great and then we were up at six o’clock the next morning, so when everyone else was partying we were driving away at two in the morning to get our spot at six. That’s kind of what we had to do.

You mentioned you played in India and you’ve played in the States as well. How is it different to back home, I can imagine in India it would have been a bit different?

Yeah it was. We played four gigs in Delhi, we were over there for the Rendezvous Festival – it’s a big culture festival. When we were playing it was in this big auditorium with 5,000 people. There was an area between the seating and the stage where people could stand but everyone was sitting. So we got the Indian dress with the hats and we went out and started playing so for the first three songs they were kind of clapping after each song. It was kind of weird, we were going ‘Do they get it?’ and of course as you were saying nobody was drinking, we’re used to playing in Ireland where everyone’s drinking. Then after the fourth song a few people came up the front and started head banging. Then by the fifth song the place was like fucking rammed everywhere. Jay was crowd surfing and it was one of the best gigs we played, and actually the same gig as well, Gerry broke two bass strings in one song, Gar broke his snare drum, Jay broke a string on his guitar or something like that and I burst my trousers but luckily I was wearing the Indian suit to cover it up so I didn’t realise ‘til after that there was a big hole in the back of my trousers.

Would you do it again?!

Definitely! I’d love to go tour the whole of India. I loved it. It was good craic.

With the climate the music industry is in, did you find it hard to support yourselves financially?

We’ve always found a way. We’ve been at it eight years now. It’s always going the right way, we always look at the bigger picture so the way we did it, even a few years ago any money we’d make would all go into a bank account to pay for the van and getting around touring and stuff. It’s only the last two years we’ve been able to get a wage. But everything just seems to get better for us now. Obviously, live music is where it’s at; it’s where you make the most money. But coming over here is like starting all over again but in Ireland it’s good. I think where there’s a will there’s a way. If you like what you do you’re going to find a way of making a living out of it.

What have you accomplished so far and what do you want to achieve?

I suppose we got a number one album in Ireland, went gold before Christmas, and then we had a sold out tour all over the country which was brilliant, because we’d always sell out in Dublin and we used to get good crowds around the country, but now everywhere sells out – that’s great for Ireland. Now we’re looking at doing the same in the UK, in Europe, and then America. We’re on the road I guess but there’s still a long way to go. Making good albums and playing good gigs – that’s what it’s all about.

So what’s happening in the next twelve months?

A top ten album here in the UK, top ten album in Germany and then playing 1,500-2000 capacity arenas like we do at home. And then the next album is out.

The Single ‘All Works Out’ is available from March 9.

The Riptide Movement – You And I on MUZU.TV.