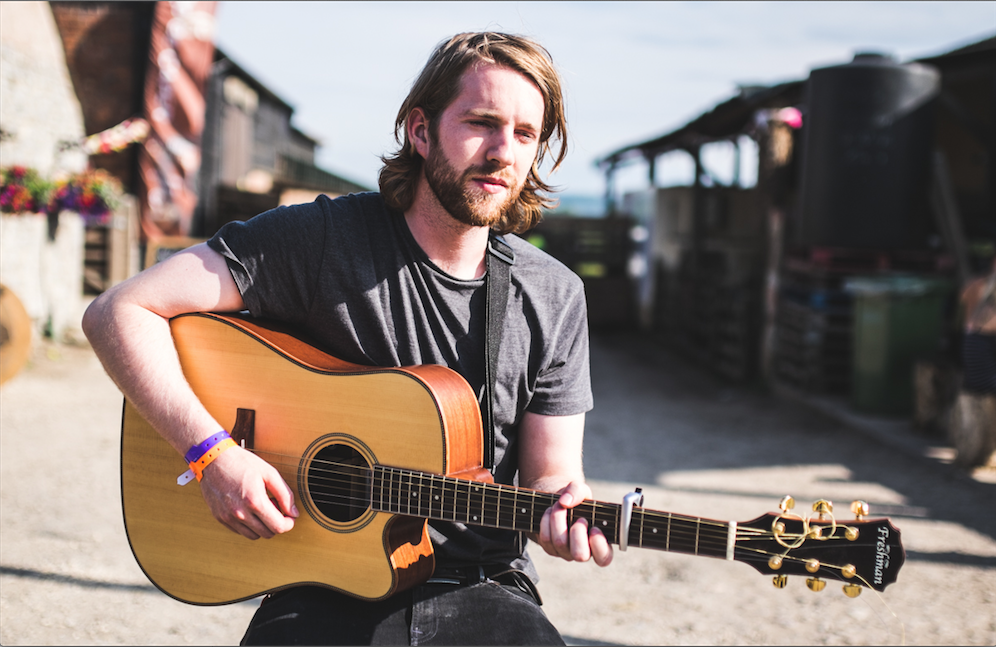 In the lead up to his forthcoming album, Barn on the Farm regular Mike Dignam was back to perform as part of the 2015 line-up, only this time he’d be playing twice as he was announced to fill in for another act on the Main Stage.

Just before his first slot, we caught up with the singer/songwriter to chat about the album, his new music video and his musical journey overall.

You’re set to play Barn on the Farm a bit later today – how are you feeling?

I’m feeling good! Feeling excited! I’ve loved this festival ever since I first came here which was the first ever year, and I’ve been back pretty much every time. It’s amazing so yeah, it’s gonna be good. And I get to play twice which is cool!

Yeah, I was gonna ask you since you’ve been announced to fill in on the Main Stage, are you gonna change the set up a bit and have both performances a bit different?

Yeah, definitely! It was kind of one of those calls where I was wondering should I do it or is there someone better for the job but then I just thought I’ve got to do it. You know, if you get a chance like that thrown at you, you take it. I’ve played it so many times but I’ve never played the Main Stage because I guess they want bands and big sounds up there. But yeah, I’ve recently had my electric guitar modified with another pick up which basically only picks up the E string and that goes out to another input socket out to a bass amp, so if this makes any sense it’s basically a guitar and a bass at the same time, and then I’ve got a kick drum. So it just makes my guitar sound huge. And yeah it’s gonna be the sort of début for that on the Main Stage. Hopefully it works and I don’t look like an idiot!

I believe you have a mini tour coming up with just a few dates across the UK. How are you feeling about that? Do you think these festival appearances help prepare you for that?

Yeah definitely, it’s gonna be good. We’ve got three dates, it’s sort of like a warm up thing for playing the new album to people before it’s released, so we’re gonna just go for it, get the band up there and all that.

What can people expect from the new album then? Is it quite different from previous things you’ve released?

Yeah it definitely is. I took a year out of playing shows to really focus on what I wanted to do, ’cause I felt like I was getting a bit wrapped up in what I thought either my fans wanted or what I thought I needed to make to attract a certain kind of fan base or whatever. So I just took a whole step back and just thought like I need to do what I need to do with these songs. And my background when you go right back to where I started was quite heavy really, I was in a metal band, and I’m not saying that the new album is like that at all, but it’s definitely grungier and heavier and louder and more aggressive at times. It’s just got a bit more balls to it! I just did what I wanted to do with it really, and I think it sounds amazing.

The place where we did it in is where bands like We Are The Ocean have done stuff so they’ve got all the crunchy amps and stuff, so yeah I hope it gets received well, but I do think it’s a bit different.

Just before we came out to you, we were chatting to James [manager] about your new video for ‘Addict’, which I believe you’re releasing next week. Tell us a bit about that.

Well, the song is simply about the addiction to a person that you’re quite fond of. But for me the lyrics are very important and they weave a little interesting way around the subject of just saying that you quite like someone or whatever. And the video is a funny one, because we did one version of it and I watched it back and thought it was trying to look too cool with the edits and stuff, so we took it all the way back and I left loads of the outtakes in the final thing, so when I think I’m not being filmed and just setting up to be filmed – loads of that’s in it now. And it’s just a bit more loose on the edits and looks a bit more interesting. It’s kind of the first introduction to the new album, we’ve got more videos planned and stuff, so I think it’s gonna be an interesting little thing to start the ball rolling.

Finally, is there anyone on the Barn on the Farm line-up you’re looking forward to or are just a big fan of?

There’s loads! Jack Garratt is amazing, I saw him last year here and he’s obviously done really well this year. The Staves I absolutely adore and I watched their documentary of how they made their album, and it was incredible, I’m a proper geek when it comes to that kind of stuff! And obviously Mr James Bay is the man of the moment isn’t he!? There’s tonnes of great acts and I like that I don’t know all of the acts but I’m sure I will just stumble upon some acts that will have absolutely great talent.

Thank you so much for chatting to us Mike.

Mike’s new video for ‘Addict’ is out now.

You can vote for Barn on the Farm to win Best Independent Festival award (Golden Welly) right here: http://diymag.com/aimawards