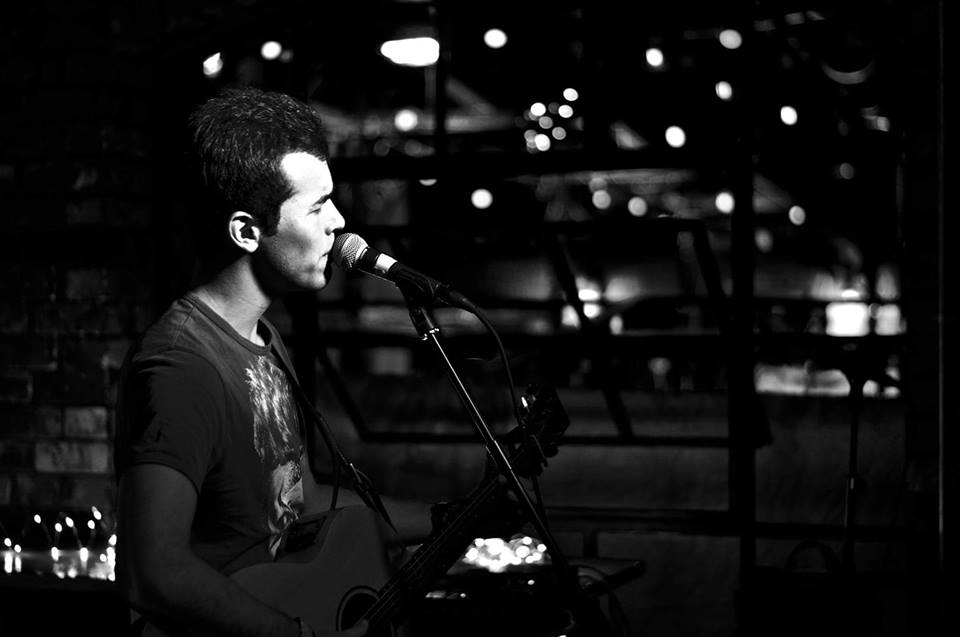 As many may know, there is no shortage of up-and-coming musical talent among the streets of London, particularly with the number of solo acoustic acts flocking to the numerous open mics and jams that take place every day of the week. With each artist having such different backgrounds, influences and goals, each one has a story to tell, and young alt-folk songwriter Mick Gough is no exception. Mick was kind enough to sit down with us for a pint in The Windmill Tavern, Waterloo, where we discussed just what drives one as a solo artist, the state of the London open mic scene, and how things were looking for the near future:

So Mick…is it Mick, is it Michael?

It’s anything you want it to be. I go by Michael in person but my stage name is Mick Gough. I thought it sounded cool, like Mick Jagger.

Is that the kind of image you were going for?

Yeah, a little. I know he’s got a 50 year career and has slept with 4000 women, so he’s doing something right.

I thought that was Gene Simmons? I’d rather have sex with Mick Jagger, to be honest. He’s got the hips.

Anyway, before we got too far off course, why don’t you give us a brief history of your career up to now to kick us off?

Well, I’m originally from Beckenham, sort of on the border of London and Kent. I’ve been playing guitar for about 6 years now, but when I started out, my musical knowledge wasn’t great. As ashamed as I am to admit, my record collection consisted entirely of U2 and Coldplay. I wasn’t always going for the solo thing, I just started out playing in school bands, maybe with high hopes but not really aiming for much higher than school showcases.

What sort of thing were you doing back then?

We’d just be jamming out in free periods, really. The band I was in was the clique of everyone that wasn’t really in a clique, a bit of a mishmash. We covered The Fray, Linkin Park, typical sort of 00’s kid stuff.

So was going solo a conscious decision?

After school I went to a music college in Lewisham, and I just loved performing but I hated organising people. It’s easier to organise one person than several! I wouldn’t be opposed to starting a band to flesh out the songs, but right now it just seems the easiest thing, doing open mics and gigs by myself.

When did you start performing live?

The band I was in when I was 17, the biggest thing we did was a school talent show. I don’t think we did very well. And while I was studying we’d always do shows outside the college, but it always felt like you were playing someone else’s gig. I probably started performing solo about 6-8 months ago.

Do you find you take different influences as a solo performer than as a guitarist in a band?

I think as a solo performer I’m free to experiment a bit more. I mean my material as a solo performer is all acoustic-based, but I have hard-hitting punk songs that I’ve written and very long, slow folk ballads with weird tunings. I feel that going solo allows me the freedom to write the songs I want to be writing.

Who would you say are your biggest influences at the moment?

I would say the ‘Hunky Dory’ era in particular, there’s pure perfection of songcraft on that album. You could say his psychedelic folk side.

So you’ll draw a bit from Syd Barrett as well then?

Yeah, I suppose so. I enjoy his surrealism.

Of course his Pink Floyd stuff was very whimsical but I always found listening to his solo stuff was very sad in a way; still a very talented writer but he’d clearly lost his mind by that point. I suppose it’s the starkest representation of that kind of madness in song.

Well there’s a song from his first album, ‘Octopus’, where, I mean, he’s clearly losing it but at the same time there’s something really focused about the songwriting.

So we’ve touched on the Bowie and the Barrett, is there anyone else in particular?

So a lot of stuff going on upstairs in the lyrics department. I think there’s a lot of that in your music. Is there anything in particular you’re trying to achieve or convey with your songs?

Around the time I started performing solo, I broke up with a girl I really liked and I think pretty much every song I’ve written since then has been trying to get that out of my system.

Yeah, there’s ‘Forgetting Love’, ‘I Could Never’ and there’s a new one, which I’ve been performing a lot at open mics recently, ‘I Am Her’.

So you’ve touched upon open mics there, and you’re studying music at college. Do you see what you’re doing now as a valid career for the future? Not to sound trite, but where do you see yourself in 5 years?

I think that, 5 years down the line, I’d like to be performing my songs to whoever wants to hear them, how large or small a crowd that might be, and progressively bigger venues. I’d like to play the Brixton Academy.

Ambitious, but it’s good to have a goal. What sort of stage are you at now? I know you do a lot of open mics, is that mostly where you are at the moment? Are you starting to get more established gigs?

Well, this last Saturday I played Zigfrid von Underbelly, Hoxton, as part of an all day event organised by Fern McNulty. I’m starting to get more just through the contacts I’ve made at open mics.

Given that you’ll be coming at this with a fresh perspective, only having been performing solo for 6-8 months, what is your impression of the London open mic scene?

It’s quite a refreshingly saturated scene, there’s a lot of talent and it’s really supportive as well. The first open mics I played in London were ones like The Spice Of Life, the Tooting Tran And Social, that’s quite a prestigious one, The Library, The Magic Garden. They can all be quite intimidating as there are a lot of talented artists that you put up on a pedestal, but once you get to talk to them you realise they’re only human, and they’ll support you. They’ll tell you “Your set was awesome, but you could do this and that”.

Is there anyone on the scene that you think people should check out?

Well there’s one guy, Robert Ouseley, who goes by the stage name Pilgrims’ Dream. I just think his voice is fantastic, his sense of timing is impeccable, his songs are really tight. He’s got a real richness and range. Also Dan Caleb, he’s a huge Elliott Smith fan and that comes across a lot in his songs and he released a new single recently, ‘On The Hillside’.

You mention a lot of acoustic singer-songwriters, which I’ve noticed tend to take up a much bigger chunk of North London open mic scene than the South. When there are so many artists of this type around, do you make a conscious effort to try and differentiate yourself and make yourself stand out?

That does play on my mind constantly. I’m kind of caught between the two. I don’t think I consciously make an effort to stand out, maybe I do in the kinds of songs I write and alternate tunings or the way I sing or the way I present myself. I’ll crack a few jokes or say something to get a reaction between songs, so that’s a gimmick, maybe.

Do you have anything recorded at the moment?

I have a single out on Soundcloud, ‘River Of Words’, which is probably my most tried and tested song.

That wasn’t among your list of break up songs. What was that about?

A lot of my friends who do music tell me it’s like a Tom Waits ballad. Whereas most of the songs I’ve written you need to sit down and look at them, ‘River Of Words’ came a lot more easily. I came up with the chorus first just on a whim, and the verses are just about getting drunk in London and walking about in the middle of the night on your own. There’s kind of a lonely theme to it. A lot of people have given me different interpretations of the chorus, though.

I personally always thought it was about internal confusion, trying to make sense of everything you’ve taken in, and it’s getting lost in a “river of words”, so to speak.

I think you’ve hit the nail on the head, there. I struggle with talking to people and socialising, and I think that comes across in that song particularly. That’s quite an evident theme, being alone in a crowd. Such as bars like this [this interview was recorded in competition with the crowds watching the Chelsea v Huddersfield game].

And the other song, ‘Misfits’, what’s that about? Again, not a heartbreak song.

Yeah, they were both written about this time last year, and ‘Misfits’ is a very dark song and it tackles the same theme, only a lot more literally.

So why have you put out those songs in particular? Were they just the songs that were ready or were they the ones you most wanted people to hear?

On the one hand, I wrote those songs while I was studying last year, and as part of the course we had to record songs to release on Soundcloud and those were obvious choices as they were fresh songs, but it wasn’t just that. They were both very strong songs, and there were about another half a dozen half-finished songs that I could have worked on but there was a strength and a intrigue to those two. They’re meant to be a calling card.

And to wrap things up here, what’s the plan for the near future? Is there anything more to be recorded? Any big gigs?

In the last few weeks I’ve been walking the line between recording and performing, as I’ve had a huge step forward in both aspects. I’ve been in the studio with a few of my friends, including Bob Parbrook, who’s been helping me record some of my songs. I’ve also been working with Greg “Wizard” Fleming from Alabama 3. He’s been taking the recordings I made with Bob, and some other stuff I’ve been working on with Marie Keymist, a very talented singer-songwriter, and he…the guy’s a genius, he’s been taking the bare bones and making full, professional-sounding records.

Do you tell him what you want, or wouldn’t you dare?

I think we’re kind of on a wavelength, we work quite well together and we work quite quickly together. He’ll hear a song, he’ll hear the vocal and guitar and say “Oh, you know what’ll be good…”. He’s got a golden ear, and his focus is on improving a song, as any good producer would do. It’s not so much about leaving a fingerprint. From that, I’m hoping to have an EP out late June/early July. I’ve got two songs down already, another that’s ready to go, so if we get that one down, that’s an EP.

And finally, any big shows you’d like people to know about?

I’ve got a two hour set at the Map Studio Cafe, Kentish Town on 25th May. I emailed the promoter on a whim and got offered this two hour set, so I figured it’d be good as I’ve only been doing half hour sets so far.

Brilliant, cheers for chatting to us, Mick.