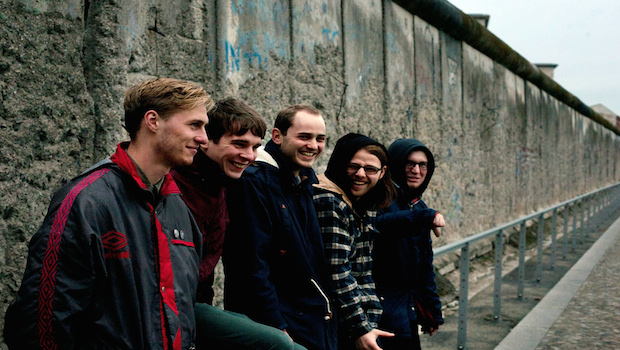 You guys are set to play Longitude a bit later – are you excited?

Yeah, yeah! We like coming to Dublin, it’s just a shame we’ve got a gig tomorrow morning so we can’t stay on, we’ve got to set off for Latitude tomorrow.

Have you played in Ireland much before?

The self-titled album came out this year, how have you found the response?

Overall it’s gone down really well. It’s hard ’cause since it came out we’ve been on tour pretty much so it’s hard to judge it, but one way we are judging it is just by the turnout of crowds at gigs. It seems to be doing ok.

Have you found a difference with crowds recognising songs live as well and being more keen to get involved and react?

You guys formed back in 2010 – how did it feel to finally get the album out after 4 years?

It was a relief. It’s hard for anyone to take you seriously when you’re touring and you haven’t got an album. A lot of promoters won’t book you and stuff, so it’s not too viable to do large tours. So unless you’ve got an album out, it’s hard to make your money back.

What’s the writing process for you guys? Even for that album, how did it all come about?

Everyone works on their own in the beginning and then we start coming together with our ideas once we’ve got a bit.

I know you can’t stay around much longer but is there anyone you’d love to see at Longitude or anyone you’ve enjoyed already?

I don’t think we’ll get a chance to see anyone, we came to watch Parquet Courts. We’ve got some friends who live in Dublin so they’ll come down and we might have a chance to have a drink, and then get another plane back to Leeds to set off tomorrow.

Other than this and Latitude, what are the Summer plans for the band?

We’ll be writing the new album and also just lots of other festivals. Then starting the UK and Ireland tour in October, all the way throughout the month.

Thank you so much for that interview guys.