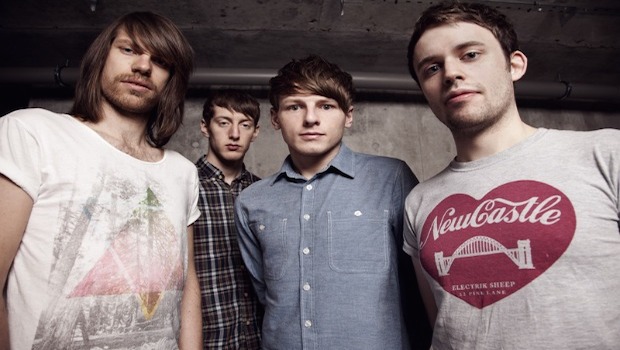 Fresh off stage from the Underworld, at this year’s Camden Rocks, Boy Jumps Ship performed a mighty set to a loyal following.

We caught up with the band just before they headed out in search of a Nandos!

Hey guys, so this is the first time playing Camden Rocks right? Are you enjoying the festival so fare?

Yeah it is man, yeah it’s cool. We’ve played Liverpool Sound City and The Great Escape, there like quite similar festivals and stuff but actually we’ve found this one to be the most relaxed of the three so fare. Its Camden so there’s a great atmosphere and it’s cool, really enjoyed it.

Yeah the atmosphere’s brilliant. Have you had a chance to see any of the other acts yet, are you planning to see any one particular?

We caught a bit of Verses, on before us, they were great.  I don’t know who else is on, maybe catch Twisted depends on the time they’re on and how much time we have.

I know you must get asked this a lot but do you mind telling us the story of how the band formed?

Sure. Basically, me and Si we’re in a band together, Johnny Rob and JD we’re in another. Both bands kinda petered off, came to an end. Erm we all still wanted to do the music thing, so we decided to get together, started jamming. I know it sounds corny but it came together really nicely, when us four got in a room and it just felt right like, we all knew each other from before like. We all went to school and college, so we all knew each other from the circuit around our way, Newcastle.

Erm so yeah, it all came together really nicely and we’re all best mates anyway.

I always think that bands work so much better when you’re all friends first and the music comes second.

Yeah, whether it’s writing songs or whatever, we never fight with each other. I know we’re best mates but if someone’s got something to say we say it to one another there’s no punches pulled, everything is honest and we keep it that way. It’s probably why we get on so well because we hangout away from the band.

So you guys are form Newcastle, has the Newcastle scene made you like this, is it a strong music community?

It’s getting better like, it was quite isolated, when we first started the band, like Boy Jumps Ship, two, three years before the it was thriving but then it nosedived, became non-existent. Ever since there’s been an incline and a rise again, like last week there was a small festival at home like this (Camden Rocks) full of emerging talent. Some of the local bands were great like, people we’d never seen before and we like to think we keep our ear to the ground.

Bands like Little Comets or Gallery Circus before, they’re just like us, people from our neck of the woods. Obviously they differ sonically, but they have the same ethics towards being in a band and stuff.

And their just mates from back home to us.

For the ‘Better Days’ video the little boy with the baseball bat I thought was kinda scary, was that intentional?

We were trying to embrace the whole dark side of what we’re doing, it was meant to be all post-apocalyptic Britain, like the world was gonna end kind of vibe. The kid is actually our tour managers little brother, he’s like 10.

He’s actually a really timid lad, he was so nervous about doing it, I was like ah man, he was crying and had proper stage fright.

Bit of a weird question, If you could write any song ever, what song do you wish you could have written?

I would probably go ‘My Hero’, that or ‘London Calling’ . Yeah I’ve just noticed your huge Dave Grohl tattoo aswell…

You have been tipped by the likes of Foo Fighters and Brand New, aswell as having you EP ‘Lovers And Fighters’ getting great reviews. How does that make you feel?

Of course we’re proud of it, we a lot of certain elements to our sound and a EP is a only a certain snap shot, with that in mind we tried to fill it with the biggest rock songs. We do have songs with melody, more chilled out songs but wanted to just hit people with big songs.

We saw you at the Underworld, and with lines like “We are invincible!” and “We’ll sleep, We’ll sleep when were dead”, and easy to see you as a band really believe in that

Yeah we just wanna live life to the full, and to be honest we enjoy what we’re doing and we feel like we’re saying what we’re thinking really, we’re just trying to be honest.

Your live show is super energetic, is that a conscious part or do you live in the moment?

And Final question is there any bands that you think our readers should check out?

Defiantly The Xcerts, Dinosaur Pile-Up, erm The Subways I’ve been a big fan of them for a long time. We’re so going to stick around, we’re real music geeks like. We love checking out new stuff.

And with that Boy Jumps Ship say their goodbyes and head into Camden looking for food. “We just want some Nandos, we’re not fussy or out”